Few brands out there are instantly recognisable before you’ve even laid eyes on its logo, but luxury decor brand and Italian icon Fornasetti is one of them. Known for its graphic, monochromatic designs that depict interpretations of architectural triumphs or quirky anatomical drawings, to own one of its pieces is to own a piece of bona fide Italian history. But where did it all begin? Who or what have been its greatest muses? And what is there to say of its enigmatic founder, artist Piero Fornasetti?

An icon designing icons: the creative genius of Piero Fornasetti

Artist Piero Fornasetti was recognised as a master of many disciplines. He painted, he sculpted, he engraved, he decorated interiors, and, as such, is regarded as one of the most original creatives of the 20th century. So diverse was Fornasetti’s work, he could never be put into a specific box for his pieces crossed such a number of movements that some viewed his art as a movement in its own right. Known too as a rebel, Piero was expelled from the first fine art school into which he’d enrolled himself and struggled to settle into scholarly life at the second. Instead he read, he researched and found other ways to broaden his horizons. In the 1930s he devoted himself to the study of engraving and printing, working with some of Italy’s finest artists and even inventing a printing technique for silk scarves.

The 1930s also led him to Gio Ponti with whom he developed a close, creative partnership that involved interior decoration for homes, hotels and cinema auditoriums. This partnership paved the way for the Fornasetti brand to come. Without Ponti, perhaps Fornasetti wouldn’t be the institution that it is today for it was Gio who helped to bring Piero’s graphic patterns and spatial illusions onto the surfaces that today make up his commendable collections.

The heartland of art and design: Fornasetti’s humble beginnings

1950s Milan—the period and the place that claim the Fornasetti atelier’s founding moment. Just two years later one of his greatest art series would begin, Tema e Variazioni. This series would establish his homeware brand as one of the greatest in Italy’s history.

Today, there are more than 11,000 creations to Piero Fornasetti’s name, with his legacy living on through his son Barnaba who has kept the brand’s atelier in the very city that started it all. 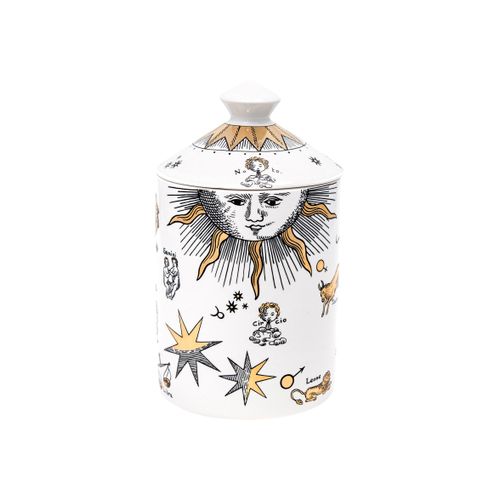 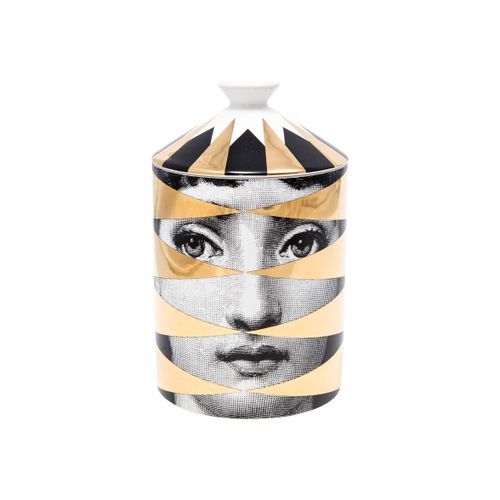 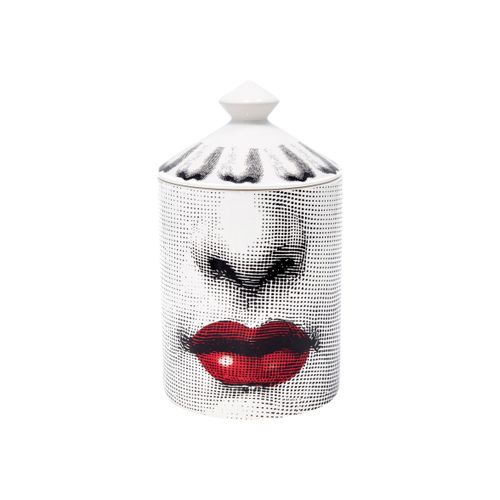 Where irony meets imagination: the stories behind the designs

Whether it’s his furniture line or assortment of home accessories, there exists not a Fornasetti creation that isn’t overflowing with intrigue. Or ‘practical madness’ as the artist put it himself. While his hand and his trademark monochrome palette make his pieces quickly recognisable, it’s Fornasetti’s fascination with one particular figure that surely distinguishes his creations most of all.

Piero Fornasetti’s ultimate muse was Italian operatic soprano Lina Cavalieri whose hypnotic gaze follows you from piece to piece. On the Lux Gstaad dining chair, the seat back is that of Cavalieri’s face and neck shrouded by a pom-pom-topped ski mask; on tissue box covers her facial features look back at you in the playful way that pop art allows; on waste paper baskets it is her forearm and palm that reach out into the room. To Fornasetti, she was perfect; he described her as being classically beautiful in the same way that a Greek sculpture is. There are 350 pieces in total that display her face with the original ceramic plate collection (that has been translated to wallpapers, textiles and candles aplenty) being the most iconic. Greek and Roman architecture inspired Fornasetti greatly too, as did astronomy (peep his Astronomici Bianco Candle), but he was always adamant that his eye travelled across time rather than being anchored in any specific era.

"I do not believe in eras or times. I do not. I refuse to establish the value of things based on time. I do not set boundaries and nothing is too esoteric to inspire me. I want to free my aspirations beyond the limits of the ordinary.” Piero Fornasetti was certainly a man ahead of his time.

Expensive candles are just one aspect of Fornasetti’s collections. There are beguiling jade green malachite side tables, folding lithographic-printed screens showcasing hot air balloon strewn landscapes... Any and every Fornasetti design is made by hand in its Milan studio. In the case of its collectible candles, the ceramic vessels are handmade, the designs hand-drawn, the wax hand-poured and the fragrances hand-selected by a collective of esteemed perfumers using a sublime palette of ingredients. The level of craftsmanship that comes out of its atelier is as significant to the brand’s story as the art that decorates it. Beyond Milan, the house of Fornasetti collaborates with a few strictly chosen partners such as Cole & Son who offer Fornasetti wallpapers; Cermaica Bardelli—responsible for crafting classic Fornasetti tiles; Roubini who distribute artisan rugs with original designs by Piero Fornasetti; and fragrances such as Otto are the work of Olivier Polge—the master perfumer at Chanel.

From the earliest interiors decorated by Piero Fornasetti, such as the Casino of Sanremo and the first-class cabins of transatlantic liners like the Andrea Doria, to modern-day hotel suites—the most famous of all being the Fornasetti Suite at the Milan’s Mandarin Oriental that’s bedecked with Riflesso wallpaper in the living area and the Chiavi Segrete wallpaper in the bedroom—it goes to show there’s much more to this brand than a pretty face.