Crystal clear waters, white sandy beaches and balmy sunsets – The Bahamas are the quintessential summer getaway, but the charming islands aren’t exactly renowned for their design prowess. So, when top London design firm Finchatton was commissioned to create the interiors for an apartment in Albany – the island’s Tiger Woods and Ernie Els-owned complex – the challenge to marry island life with a modern, design-centric sensibility began.

Commissioned in January 2013, the apartment in question was scheduled for the complex’s Orchid building – a French Quarter-inspired edifice by New York architect Morris Adjmi. The landmark building is characterised by a laser cut stainless steel arched façade which features a stylised orchid pattern – inspired by the wrought iron balconies of the architect’s native New Orleans. 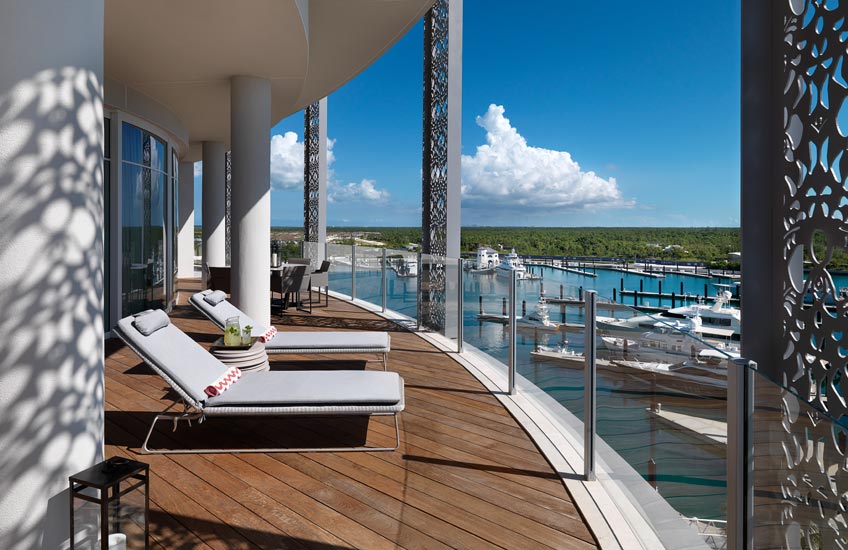 “Orchid was a contemporary new building with expansive floor plans designed to optimise the views of the marina and the ocean,” explained Finchatton’s Design Director Jiin Kim-Inoue, “We were able to start with a completely blank canvas and create a beautiful vacation home.”

Having been commissioned to create a beach property with an interior design worthy of a high-end London pied-a-terre, Finchatton spent 23 months crafting the 7,775 square-foot, 6-bedroom project. The finished outcome – a refreshing, light-filled home worthy of a discerning but carefree lifestyle. Creating a space which constitutes the new island experience might’ve been a hard task, but Jiin and her team were successful thanks to careful design choices and, above all else, allowing the apartment’s paradisiacal environment to be the preeminent decision maker.

Speaking of its most spectacular feature, Jiin explains, “We wanted our scheme to complement the amazing view outside.” And nowhere else was this more of a determining factor than the reception’s curved marina and ocean-facing façade.

An homage to “the curved shapes of ocean waves” and the building’s curvaceous silhouette, the room showcases a hypnotic appeal. Two facing Vladimir Kagan Serpentine sofas encompass a round hammered brass Pierre-Marie Couturier coffee table, both grounded by a 100% dull silk circular Tai Ping rug. “I am a big fan of Vladimir Kagan and have been looking for an opportunity to use the beautifully curvaceous sofa piece,” Jiin admits. The designer accents the iconic pieces with a shell-like Lindsey Adelman BD chandelier which revolves overhead. 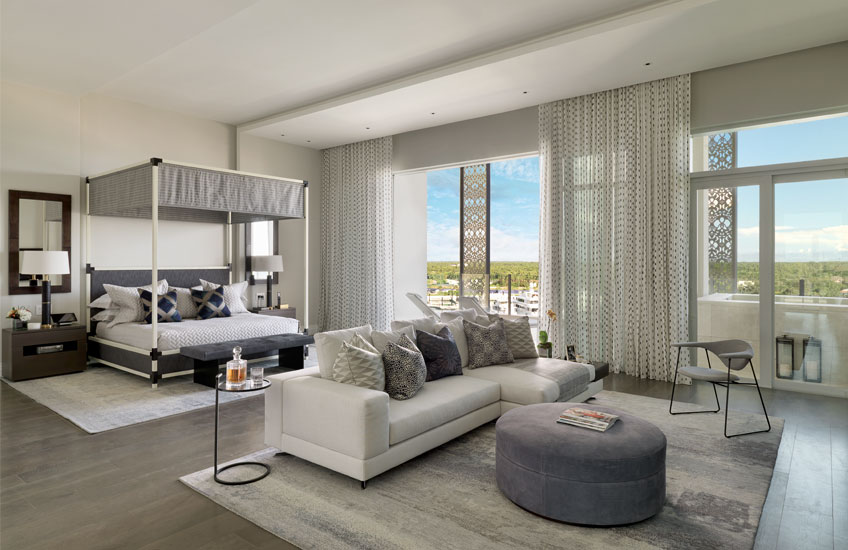 Of the formal reception area, Jiin reveals, “We used more structured furniture rather than slouchy pieces to create a more tailored look.” For this project, a scheme of wicker and loose covers just wouldn’t do. Instead, Jiin’s vision proves itself a more than worthy island aesthetic thanks to its keen spatial understanding, fluid arrangements and tonal layering.

The apartment’s timeless neutral-on-neutral colour palette lends well to the careful balance of style and environmental agreement. Glossy white marble fades into pale greys, punctuated with careful touches of powdery blues in an ode to the island’s most endearing moments – the repetitive movements of the tide washing the shore. Fitting, although certainly not colour choices typically found in Bahamian residences.

“We didn’t want a London apartment dropped in the middle of The Bahamas,” Jiin explains, “but we also didn’t want a stereotypical Caribbean interior with tropical patterns and bright colours.”

Only a palette such as this (which would be as at home in a chic city setting or a vibrant tropical one) could convey breezy island life and elegant, timeless style – its subtle nuances making way for rich textures and near indescribable panoramas. 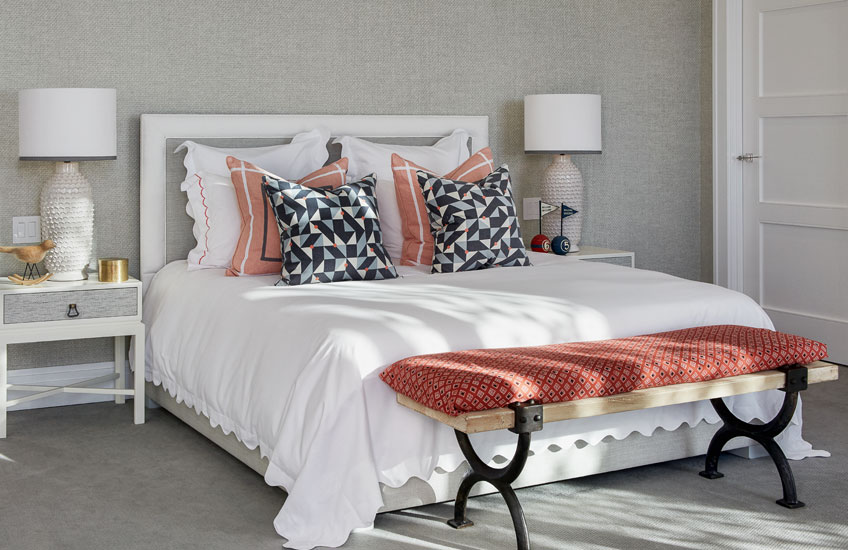 The master bedroom – which faces the yacht-filled marina – is a masterclass in calm. Smoky blues (a direct export from London) and greys accent the grandly proportioned room; at its centre an impressive four poster bed.

“I was really taken with a particular Jim Thompson fabric which reminded me of some time spent in Thailand,” the South Korea-born Jiin reveals of the design, “[It] is based on a traditional Chinese bed and we updated [it] by using a lacquered finish and dark bronze accents.” Its cabana-like air complements the home’s nearby beachside neighbours. 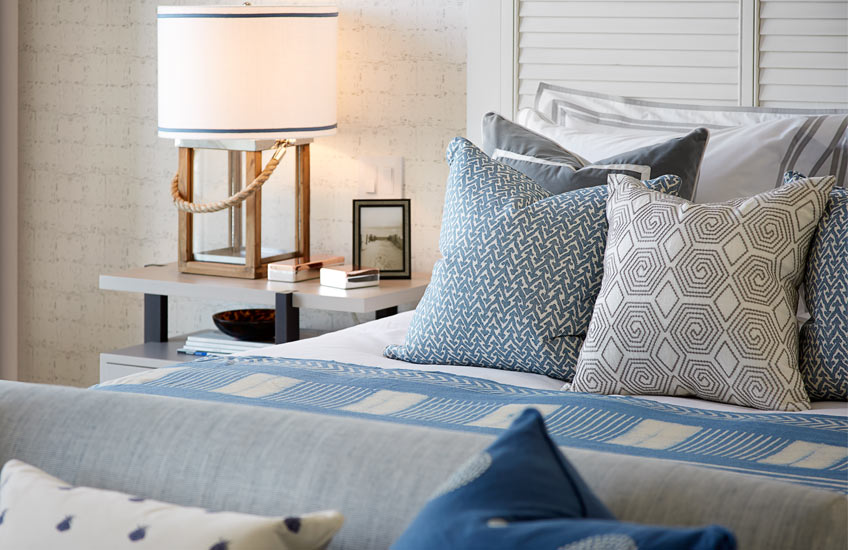 Some island-appropriate pops of colour do make an appearance here and there though, which satisfied Jiin’s longing to try out some less than London- friendly design choices.

“Having been a London designer for a long time, I have craved colour and pattern and had in my secret stash a very impressive collection of materials that were itching to get out,” the designer recalls, “We chose certain colours, such as the coral, used in one of the bedrooms since it had the best sunset view.”

Proceeding to “assign a key colour per bedroom so each has its own personality,” Jiin and her team outfitted the generous sleeping quarters with clean-lined custom-made furniture which offered a London edge. Not forgetting all the essentials for waking up in a Caribbean paradise, of course – automated curtains, terrace Jacuzzi and cool marble en suites.

The bedrooms are also where the “wink[s] to island life” can be found. “Vases which use shell patterning, ornaments of handcrafted small boats, and rope detailing on bedside lamps” were Jiin’s way of acknowledging this project’s tranquil island setting. 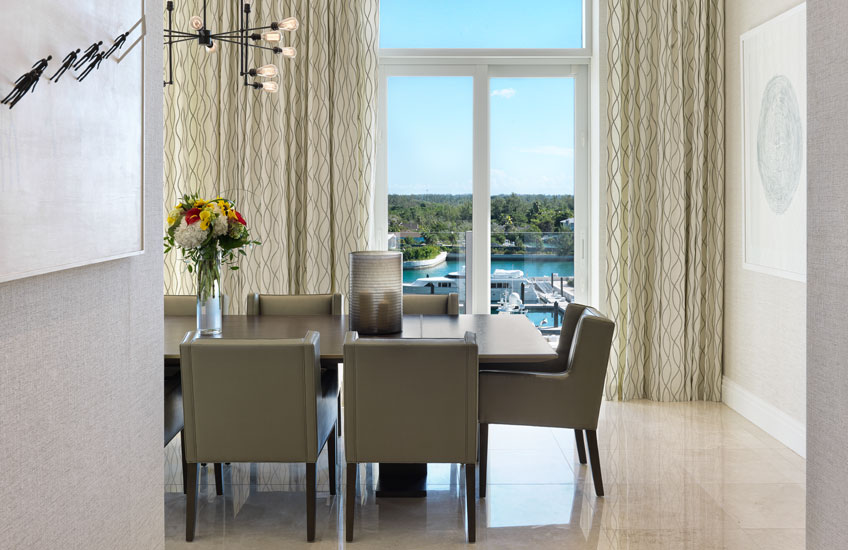 Channeling a decidedly London look, the utility areas are a direct (but no less fitting) contrast to these beachy elements. The dining room and kitchen, which sit side by side along the apartment’s eastern face, are a minimalist antidote to the vibrant colours of the setting. Overlooking the quiet tranquillity of the marina’s moored boats, the rooms are floored with cooling, polished Crema Bottocino marble which sets the tone for the rest of the design scheme.

Cool, crisp and uncomplicated, the kitchen’s scheme takes the form of a simple central island arrangement and equipped with high-end Sub Zero and Wolf appliances. The dining room makes a similarly classic statement with a 10-seater dining table and mushroom-hued, square back leather chairs, finished off with an industrial, exposed-bulb pendant light. 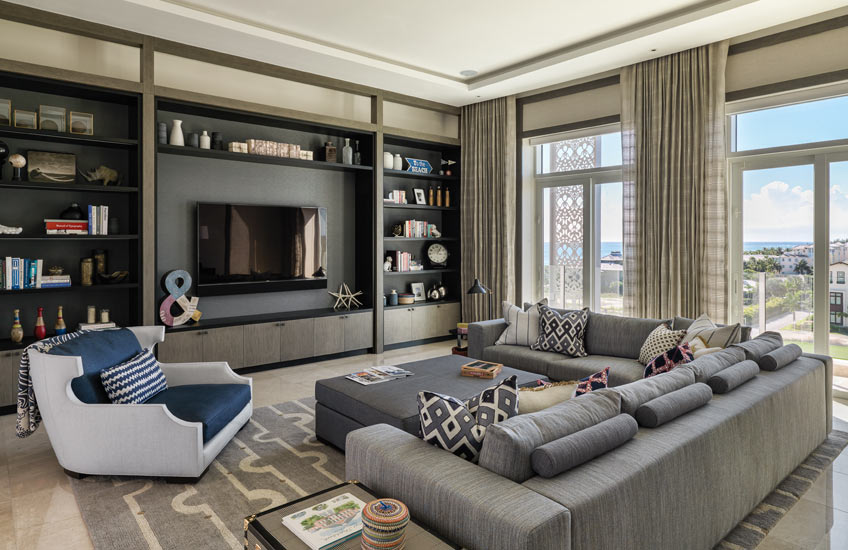 Just across the hallway, a more casual look unfolds. A spacious media room serves as the casual partner to the formal reception room – its large modular sofa and Laura Kirar rug, relaxed counterparts to the elegant offering next door.

“I wanted to create large open-plan spaces for entertaining and lounging”, Jiin says of the project, “so [that] it felt like a place to switch off and breathe in the sea air.” 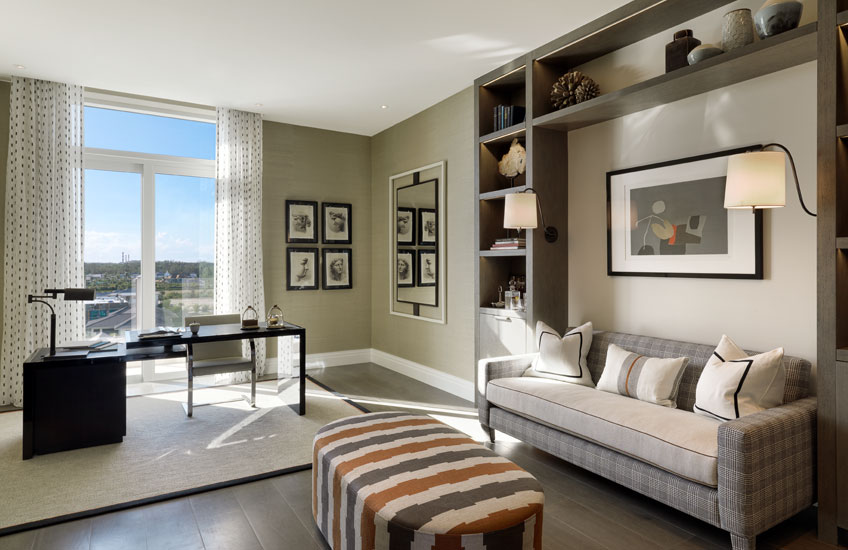 Whether it’s the ocean breeze gently unsettling the tall reception room curtains by morning or the smell of the salty evening mist by night, every element of Jiin’s relaxed but elegant design is proof that Albany is exactly where one would want to switch off and breathe.