540 Park Avenue and 61st Street. “That’s a nice address!” I’m told by a lady sitting next to me in the airport waiting area. As a first timer to New York, I wasn’t to know how true her statement would prove to be. She couldn’t have been more correct. It is a great address and, in a city like New York where cross streets determine everything, its location couldn’t be better. With Central Park acting as its back yard and a mere 5 minutes walk from Grand Army Plaza with its Plaza Hotel – indeed “close to the buzz, above the fray” as promised – it’s the perfect initiation into the archetypal Big Apple experience.

“The hotel first opened in 1963 and was built by Robert ‘Bob’ and Lawrence ‘Larry’ Tisch,” recounts Jim McPartlin, the hotel’s Managing Director, “[It] originally opened as The Summit and was an instant success for the New York social set.” 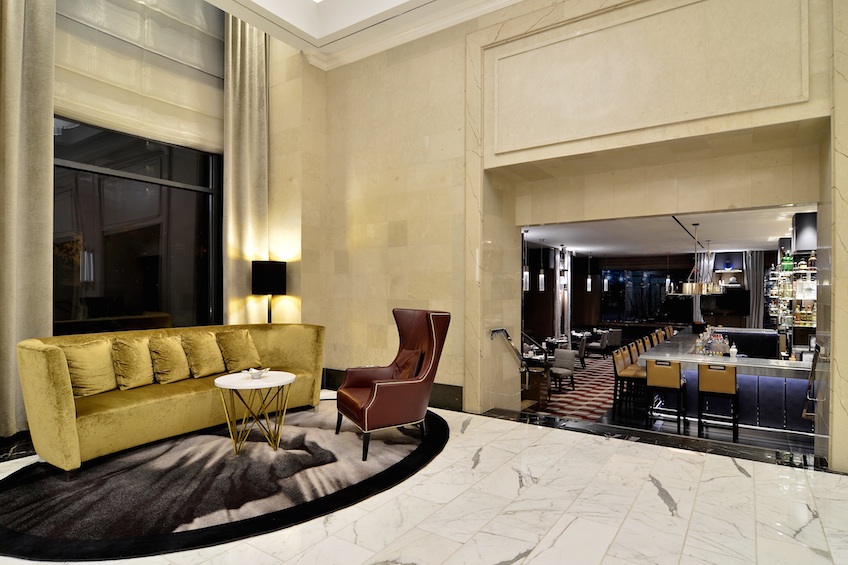 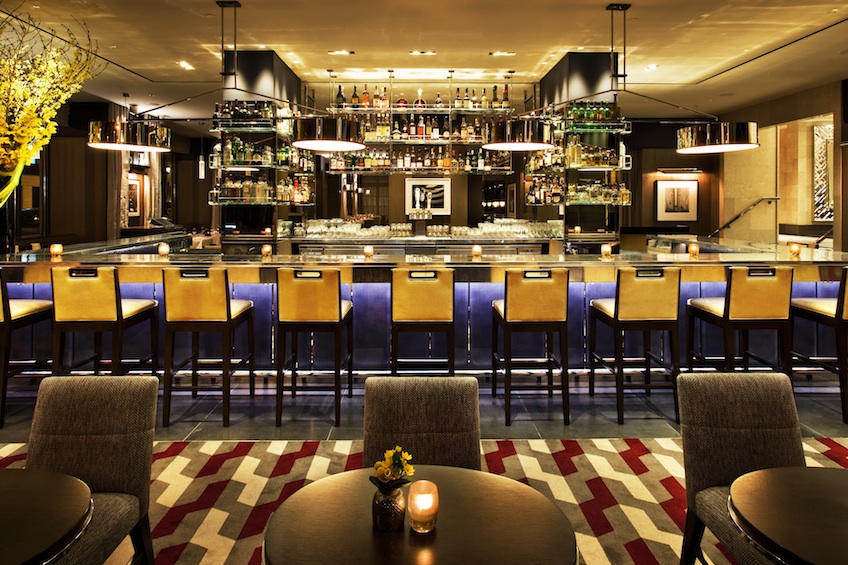 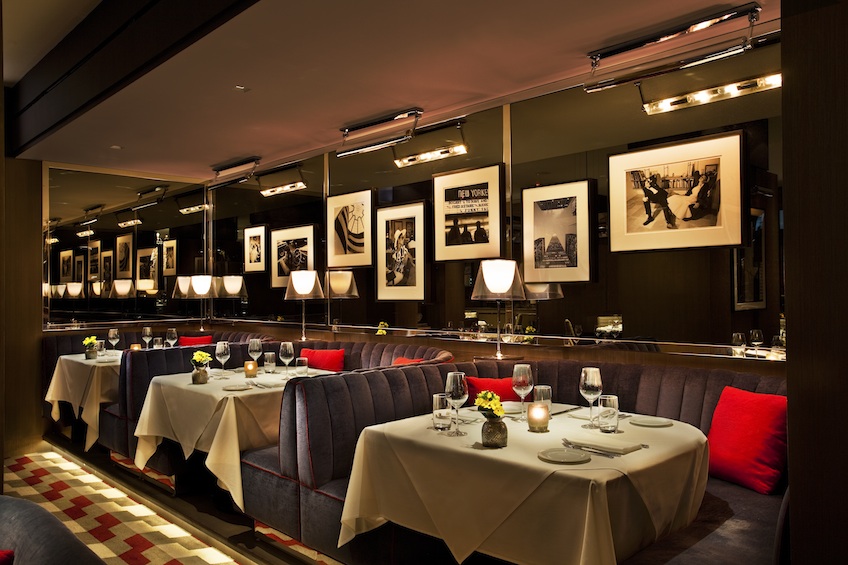 We’ll say. The hotel (or, more specifically, its atmospheric, black-and-white-photo-lined restaurant) has certainly proved itself in the city’s history including being the original site of a very unique New York tradition. “On any given weekday morning – from 7am to 10am – a collection of shiny black town cars are lined up three-deep outside,” Jim explains, “Inside, the tables are filled with movers and shakers from the worlds of Wall Street, entertainment, media and politics. As they discuss business and close deals, they are simultaneously observing a morning ritual that has been ongoing for 40 years – the Loews Regency New York Hotel‘s “Power Breakfast.” With a term coined by Bob himself, this Power Breakfast – which is still attended by the likes of news anchor Katie Couric and TV and radio host Larry King – is just one of the hotel’s defining moments. 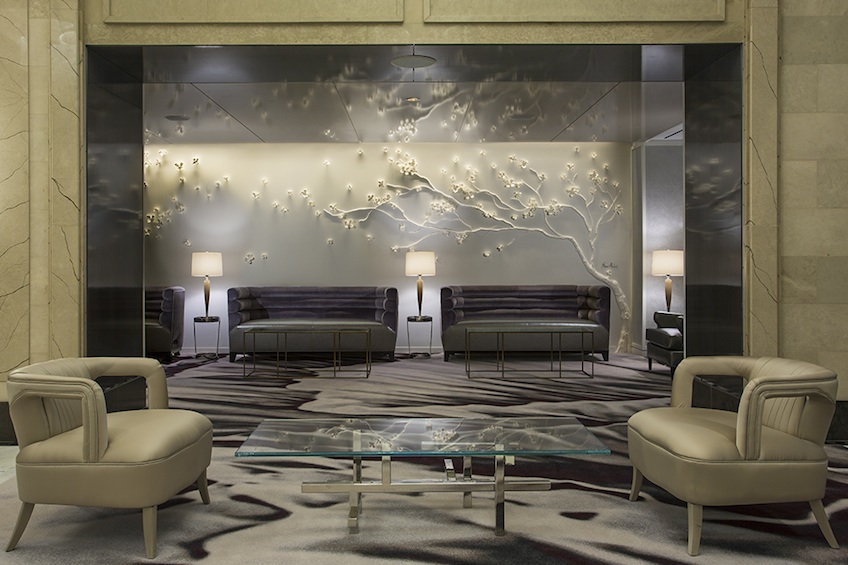 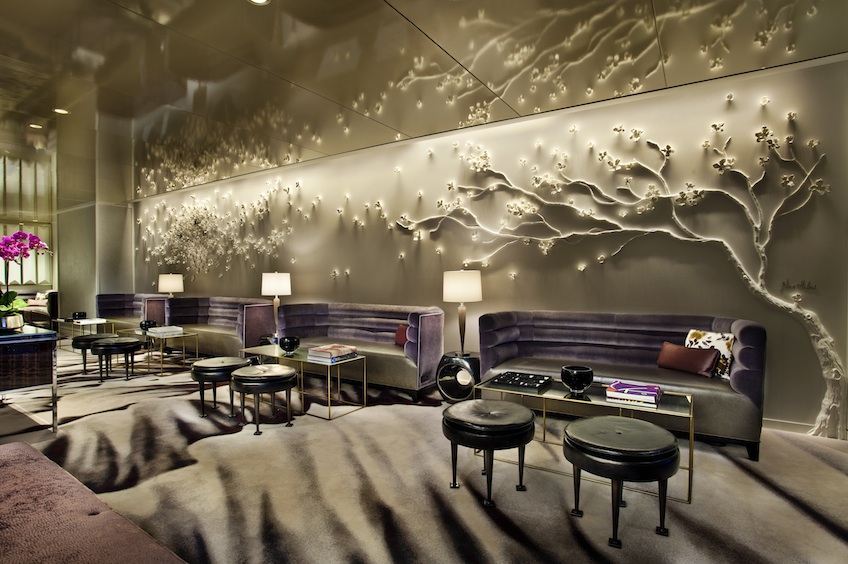 Having reopened in January last year after a $100 million renovation, its location and culinary history are definitely not the only draws however. Described as a “modern classic”, the hotel offers the best of both worlds – a worthy luxury New York hotel experience with a modern mindset (and all the expected amenities attached to that).

Its grand yet unthreatening lobby – designed by New York firm Rottet Studio – prefaces the rest and is a good example of its well-executed balance of modern and classic. Typically luxurious, it boasts a spacious plan floored in a mixture of black and white marble, two floor-to-ceiling supports with column-like fluting – a nod to classical styling – and sheltered with a lit coffered ceiling – a lovely modern interpretation of a classic look. Six subtly futuristic chandeliers – each made of circular bands dripping with layered, beam-like perspex rods – and a bespoke pleated panel behind the check-in desk offset more traditional elements of cut crystal detailing and rich woods.

With such characteristically New York styling acting as inspiration, it’s fitting that the adjoining seating area is finished off with a delicate white plaster wall relief by Nina Helms. The mural depicts a refreshing spring scene of a tree being blown in the breeze, trailing scattered pet behind it and is appropriately called “Brise de Printemps” (“Spring Breeze”). Although completely contrasting in subject, the medium is reminiscent of the relief artworks which punctuate the city – a subtle tribute. 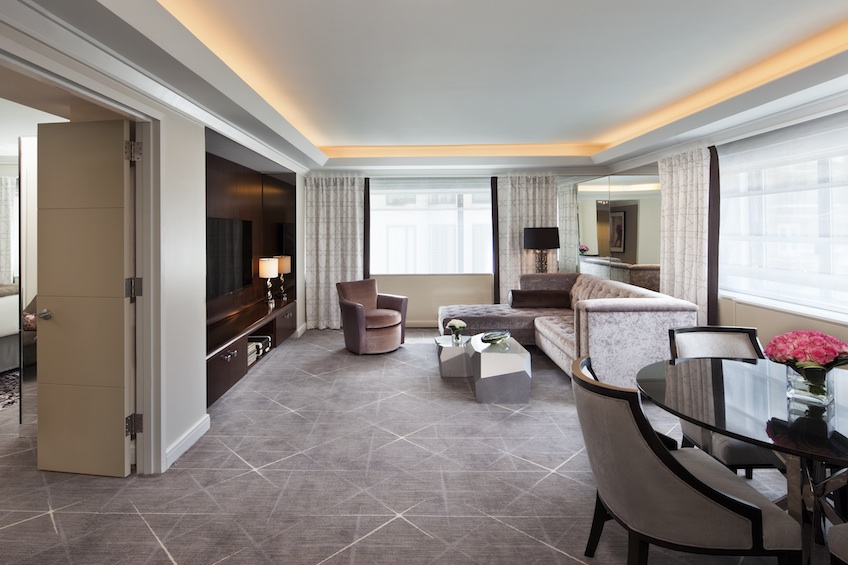 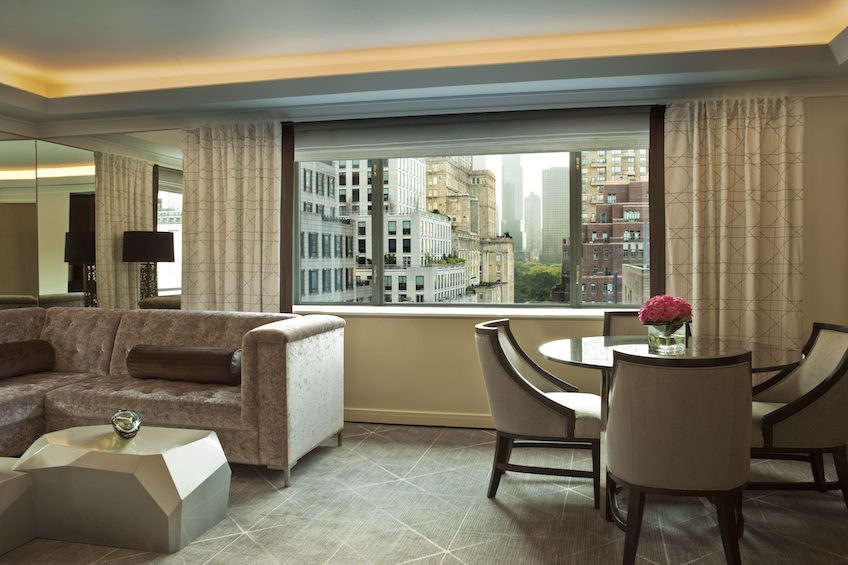 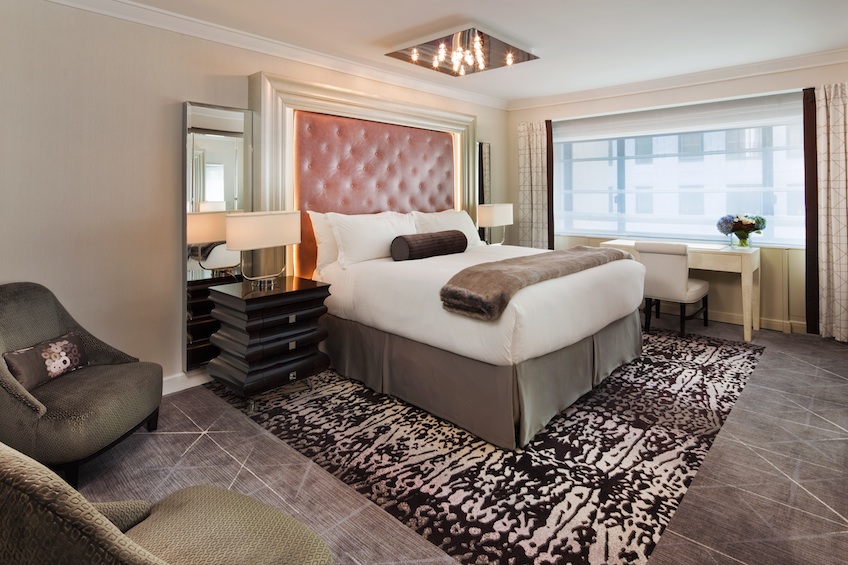 A trip to any of the hotel’s 20 other floors reveals less grand but equally well-designed spaces. “The end of last year saw the culmination of the renovation with the launch of six designer-inspired Signature Suites,” Jim explains, “We thought the concept of the ‘presidential suite’ was a little passé and wanted to bring something fresh to the mix. We wanted to ensure each suite was a thoughtful balance of contemporary style and traditional elegance, evoking the hotel’s rich history and sense of place on Park Avenue with a decidedly modern sensibility and they delivered that in spades.”

Nate Berkus Associates, Meyer Davis Studio, Inc., Rottet Studio and Haynes-Roberts, Inc., were the chosen firms carefully selected by Jonathan Tisch – CEO of Loews Hotels and Bob’s son – for their “careful blend of modern design with clean and classic style.” But that’s where the similarities end since no two suite styles are the same. 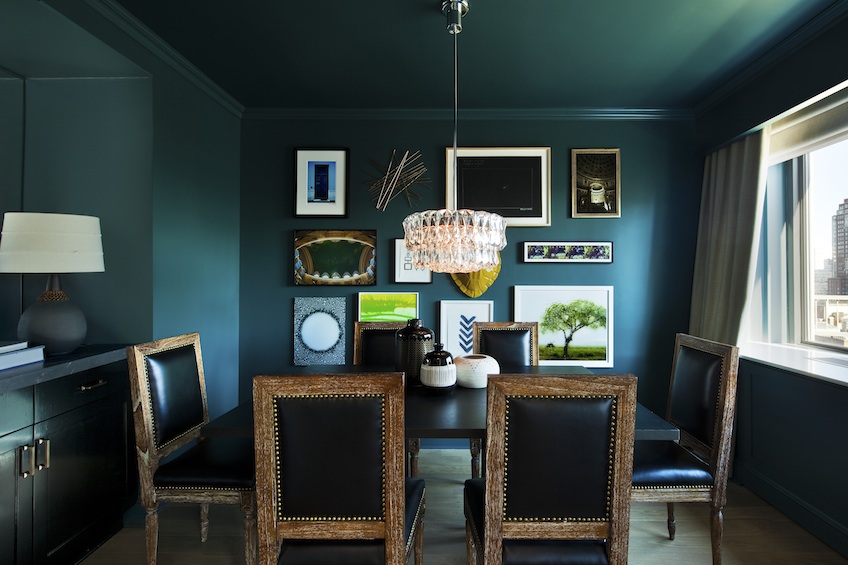 “What a great project!” Nate exclaims, “The challenge in designing any hotel suite is for it to not feel generic or staid. The goal is always to create a space that feels fresh, like you’re stepping into someone’s home, where every detail – from the art, to the accessories on the hall table – is thought out and deliberate.”

The four other suites include a retro 1970s pad, a Pop Art-inspired space, an uptown bohemian nest and a tailored suite which takes notes from the city’s fashion industry.

If you can tear yourself away from one of these suites or the 379 guest rooms (which, after the renovation, are “apartment-styled”) then hit the 10,000 square foot Julien Farel beauty and fitness centre and take a load off with one of the spa treatments. You’ll also find JF toiletries provided in the hotel rooms if leaving the comfort of your hotel room just proves far too difficult. 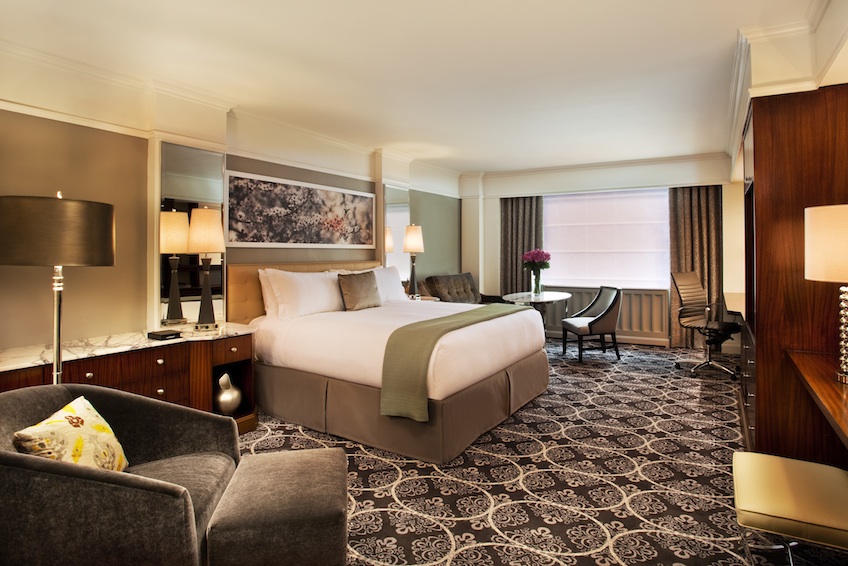 Any review of the hotel wouldn’t be complete without addressing its service which was impeccable. From the kerb-side assistance and friendly “good morning” welcome from the doorman upon arrival to the final goodbye and genuine “see you next time” as I left (with problem-free sourcing of an international adaptor in between), the hotel is a credit to New York’s hospitality industry.

The day I left it rained and, in response to a request to leave my bags in a locker room for a few hours, a kind porter lilted, “Anything’s possible – you’re in New York!” If the city’s sights hadn’t already sold me, that promise alone certainly did.