Make like the celeb set à la Rihanna, Colin Firth, Kayne, Johnny Depp and Kirsten Dunst (to name just a few) and check in at the amazing five-star Corinthia Hotel located in a coveted corner of London. Just steps away from the River Thames and within walking distance of Westminster Abbey and 10 Downing Street, the beautiful, grand old building has stood at Whitehall Place for over a century.

"We think of each team member as a craftsman: each person is responsible for their own ‘craft’".

What we love about The Corinthia Hotel London (apart from it’s breathtakingly beautiful stylings and the ethereal colour palette of muted creams, taupes and greys) is its philosophy – “craftsmanship of care”. 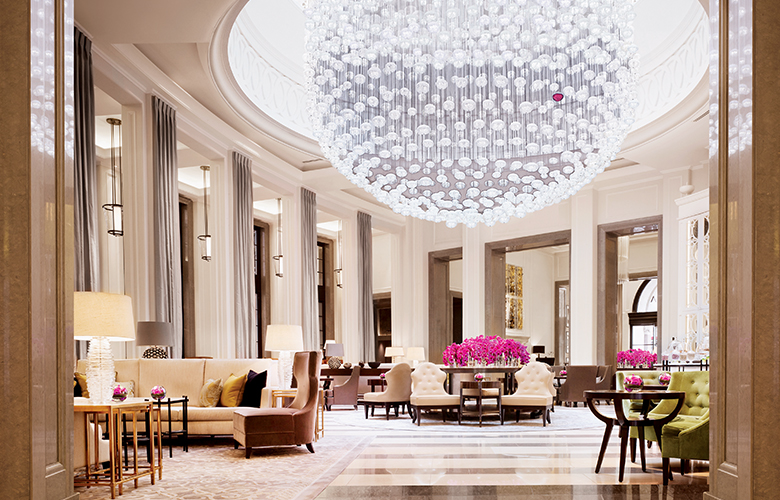 This service-orientated culture is centred around creating a personalised experience for each individual guest. Matthew Dixon, the general manager of The Corinthia London, explains it as, “We think of each team member as a craftsman: each person, from the hotel manager to the doorman and from the spa therapist to the room attendant, is responsible for their own ‘craft’. Their craft is defined by authenticity, understanding, knowledge, passion and a distinctive ambition to succeed, offering the best possible experience for every guest”.

As far as the eye can see, this philosophy rings true here. For those sleeping beauties out there, you will be pleased to hear that The Corinthia London offers a unique and flexible check-in and check-out policy, which dispenses with traditional hotel restrictions. So no getting up early or mad rush packing up your things here. And if your beauty rituals extend to a penchant for pampering sessions, take note: all guests have complimentary access to use the Thermal Floor in the spa, ESPA Life at Corinthia London. Including a vitality pool with massage jets, ice fountain, heated marble loungers, swimming pool, steam room and a glass amphitheatre sauna, you can turn a trip to the spa into an all-day pampering session. As well as the amazing Thermal Floor, ESPA Life offers a fully-integrated wellness approach alongside the luxury spa experience. It has been lauded as the best spa in the UK and, with its shimmering surrounds, gym, pool, delicious food, wide range of treatments, plus access to complimentary therapists, it quickly becomes apparent why this is the spa to visit.

If that’s not enough to make you want to visit, then let us tell you about the high point: eating and drinking. There are two restaurants – The Northall and Massimo Restaurant and Oyster Bar. The former serves high-class, seasonal British food while the latter specialises in seafood. It goes without saying that The Corinthia London is not the cheapest place to rest your weary head, so at they very least, do yourself a favour and sample pastry chef Claire Clark’s afternoon tea service or enjoy a cocktail prepared by one of the genius mixologists at the very glamorous Bassoon Bar.

Designed by GA Design International (who were also behind The Booking Office Bar at St Pancras and the Conrad Istanbul) the 128-year-old jewel’s aesthetic is that of a 21st century grand hotel – the style descendent of the defining establishments of last century. A veritable collaborative feat, its five-star design appears to have been tutored by the great history and craftsmanship of the building itself, making us not so sure anymore that walls can’t talk. As we walk through its spaces, admiring the near 250 specially commissioned artworks which line its walls – predominantly by British artists – we can sense the subtle whisperings of days gone by fused with a fabulously contemporary spin. 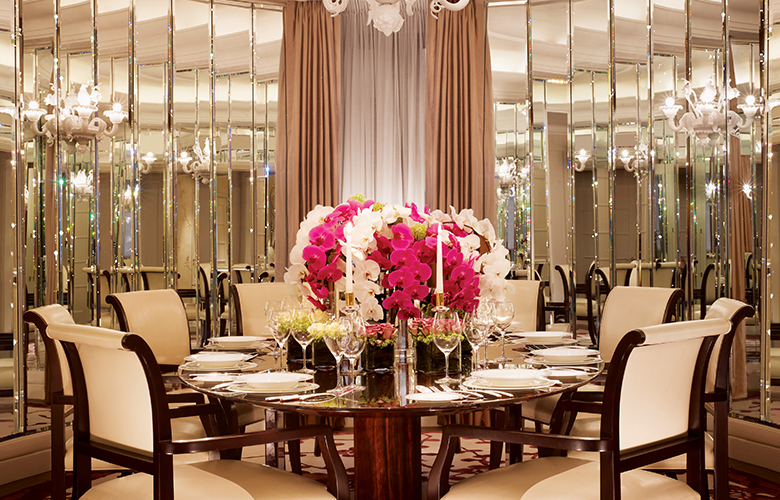 Take the bathrooms for example – which are furnished with marble from the selfsame quarry the great Michelangelo visited to source his materials. These spa-like spaces are decorated with a modern edge using a resource which has history literally running in through its veins. The glorious Full Moon Baccarat crystal chandelier is another nod to a mainstay of the stately 20th century hotels. Housed in a soaring dome of the hotel’s lobby and designed by Parisian designer Chafik Gasmi, the glistening spectacle is composed of 1,001 expertly cut crystal baubles, offering the traditional wow-factor but executed in a revolutionarily nouvelle way. And lift doors bearing the prints of leaves from nearby hundreds-of-years-old trees – even those tell a story. Cast in 12 hand-applied metal alloys, these works of art in their own right bring a flourish of London’s admired and long-cultivated nature inside. With these historic whisperings – and many more to be discovered as soon as you enter the canopied doors – it’s no wonder that the hotel has taken its place as the jewel in The Corinthia Group crown.