“The views from this building, especially at this height and with the primarily southern orientation, are quite simply the most quintessentially New York I have ever seen and, in every way, influenced what I did within,” Kelly says, “To have all of Manhattan unfurl below you in this way is nothing short of extraordinary, and nothing I would do inside could ever upstage that, so I just sought to create a warm embrace from which to enjoy it.”

Here are our favourite bits of the sky-high Kelly Behun interiors. 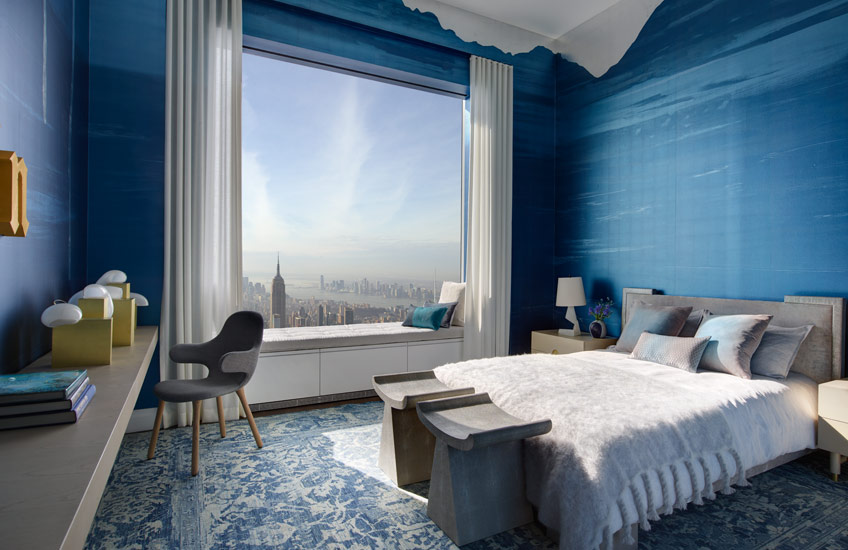 Now a well-known trademark of the Rafael Viñoly-designed skyscraper, any of 432 Park Avenue’s apartment’s 10 foot square windows will always be its most impressive feature – not because of the resolutely simple windows themselves but because of the nothing-less-than-breathtaking views which one can enjoy from them.

“The window seats are like having the best seat in the house every day to every show. All the windows have one of these built and it just creates the most perfect perch from which to watch the hustle and bustle that is Manhattan, but from a very hushed and peaceful vantage point. I made sure to line each seat with a very comfortable cushion and lots of throw pillows, so that each becomes its own destination within the apartment.” Lin-Manuel Miranda’s Hamilton just might be New York’s #2 show. 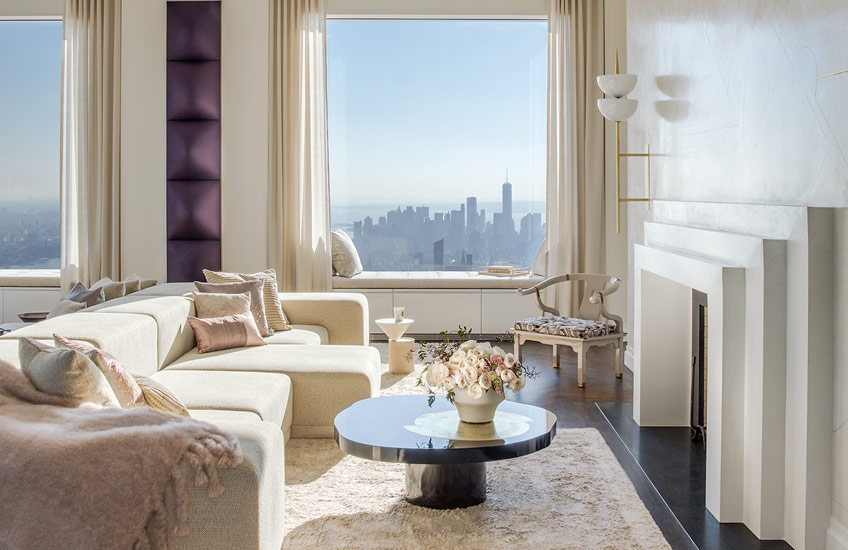 “I am a big fan of Art Deco design in general and this was the perfect place to incorporate some of those elements, especially given that many of Manhattan’s most important Art Deco architecture is framed within [the] views.”

The most prominent homage to the iconic style is a custom fireplace wall by Yolande Batteau of fine surface design studio Callidus Guild. Rendered in a fine Venetian plaster, the mural recalls the influential work of Art Deco icons Ruhlmann, Rateau and Dunand.

“She took a deconstructed Deco pattern I had previously used on a pillow and scaled it up on to encompass an entire wall in the living room. She incised areas with graphite lines and added touches of 24k gold leaf. It’s extraordinary and what I particularly love is how strong and yet beautifully subtle it is, and how much it transforms throughout the day as the light changes.” 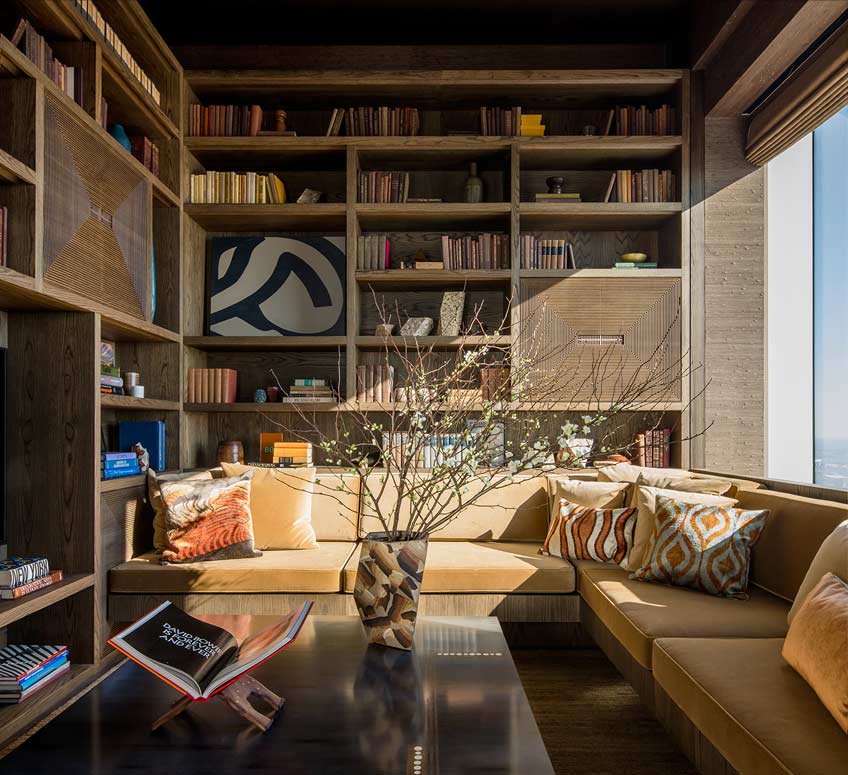 Kelly’s goal for the apartment was a “timelessly elegant space that feels warm and comfortable” and the apartment’s palette reflects that. (Of her design choices the designer says “the walls are a warm white, the floors and millwork are a walnut stained oak [and] the metallic colours I chose, all have an undertone of warmth and taken together create a cocoon-like feeling.”) The library takes a slighter stronger approach towards this warm, comfort with a colour palette that leans slightly towards a retro vibe and custom millwork with an irregular gridwork. Kelly says, “The colour of the wood, the velvet on the built-in sofa, and the woven linen rug all have a beautiful amber undertone, and I used a hammered bronze metallic foil wallpaper on the ceiling to reflect back the light in the desired hue.”

In true Kelly Behun style, the apartment showcases a cocktail of contemporary furniture designs, vintage pieces (from the likes of Vladimir Kagan) and the designer’s own creations.

“My favourite piece is the custom bed for the master bedroom. It is a 20-foot long love letter to Frank Stella, one of my favourite artists,” Kelly reveals, “I was inspired by his iconic Protractor series from the late 60s and fashioned my own homage from bleached oak and channel tufted mohair, then added some floating side tables and linen tassel pulls.”

The living room is also dominated by a custom piece – a “free-form” sofa and matching rug. Of this space, Kelly explains, “I started with the sofa and designed one that was omnidirectional and had an almost sprawling quality. Not only does it echo the topography of the skyscrapers below, but affords the ability to orient yourself in a variety of directions – towards the fireplace, the separate seating area in the room’s corner, or the dining table.”

The beauty of 432’s minimalist design is that it is the ultimate space for showcasing art pieces in the most spectacular of gallery spaces. “Because [the apartment’s] aesthetic language was already so established and felt so resolved I just wanted to respond to it in kind,” Kelly explains, “These are two architects working at the top of their game, I just needed to respect that and follow their lead!”

“I am a big proponent of the importance of living with art and so I knew that I wanted to partner with Artsy to make that happen. For me the art in the space is what really elevates it and helps people connect to it in a way that is more deeply personal.” 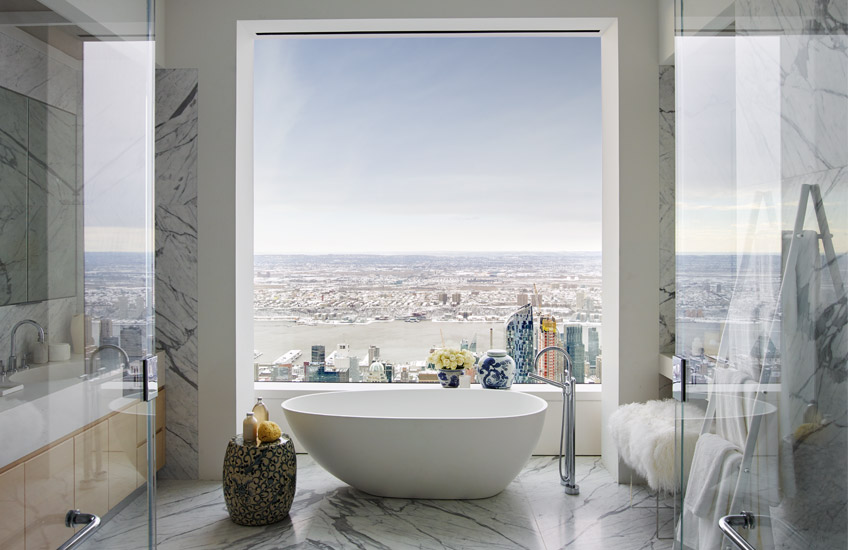 Kelly finishes by saying, “I can just imagine hanging out by the fire with all the twinkling lights and iconic landmarks below, seeing the rivers converge at the tip of the island, with the Statue of Liberty and the ocean beyond. For whomever lives here, to be able to experience this amazing city in such a magical and literally elevated way – that is quite a privilege.”

See more of Deborah Berke’s 432 Park Avenue apartment and learn about the development from the designer herself.

Get The Look: Coastal Grandma

All about the new trending aesthetic of Coastal Grandma.