Have you ever fantasised about stepping inside 50 Shades of Grey heartthrob Christian Grey’s apartment? With the hotly anticipated film adaptation set to hit cinema screens this Friday, the residence that has been a figment of millions of readers’ imaginations is finally going to come life.

Since the 2011 release of the first instalment of E.L. James’s trilogy which sold over 100 million copies worldwide, the masses have become hooked on the exhilarating love affair between high-flying CEO Christian Grey and English Literature student Anastasia Steele. And judging by the trailer for Sam-Taylor Johnson’s cinematic version, which scooped the title of most viewed YouTube trailer of 2014, it looks as though the movie is going to get even more hearts racing.

From the sneak-peek shots of Christian’s Seattle penthouse, it’s clear the film’s interiors are set to be as jaw-dropping as the passionate scenes that take place within them. Leading production designer David Wasco, known for his work on Pulp Fiction, Inglorious Basterds and Reservoir Dogs, was the conductor behind the symphony of super-luxurious, super-modern design. Working alongside his set decorator wife Sandy Reynolds-Wasco, “the two of them came with a vast knowledge and perfect sensibility for creating extraordinary spaces,” explains Director Sam Taylor-Johnson. 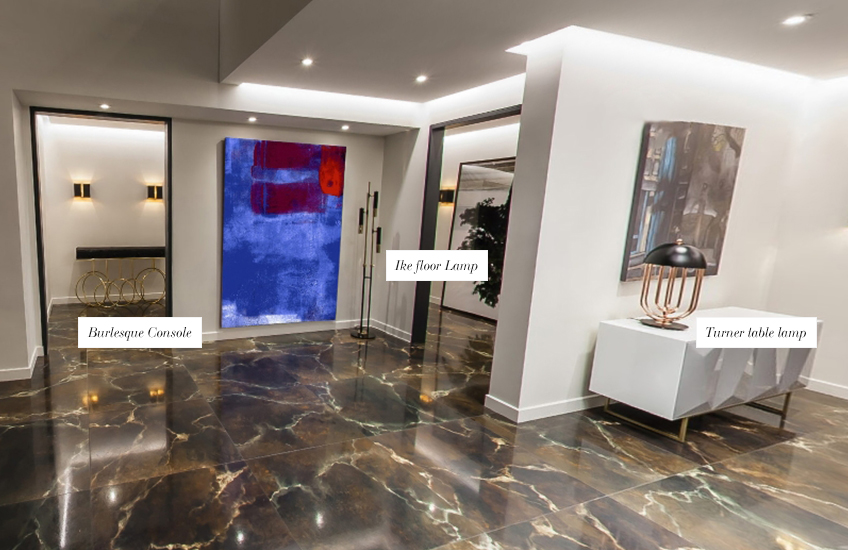 The pieces that fill the breathtaking rooms on screen come courtesy of a select handful of luxury Portuguese brands including Brabbu, Boca do Lobo, Delightfull and Koket. As expected, the interior results are slick, extravagant and impersonal at times – just like the man who inhabits them – and can be recreated in your own home by following our how-to guide to stealing Christian Grey’s impeccable style. 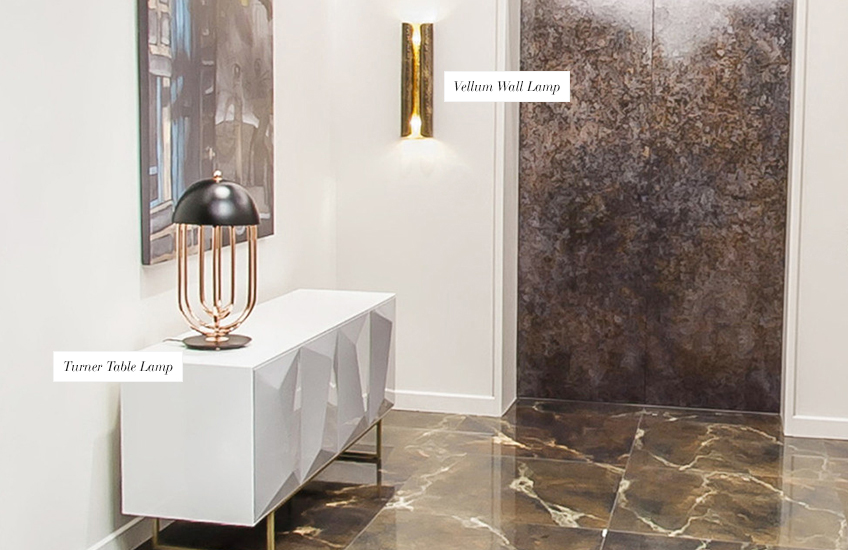 From the dark veined marble floor to the burnished private elevator doors, this shot of Christian’s foyer is all about sleek surfaces. The white sideboard – fronted with uber-modern geometric doors – also amplifies the sleek status of the space with its high-sheen finish and golden legs. Even a superficial reading of the book will quickly prove that Christian likes to exercise control so home accents are chosen with meticulous precision and usually come in the form of contemporary works of art or modern lighting solutions. Delightfull’s Turner table lamp, comprised of brass arcs at the base and topped with a black aluminium shade, is just one of several nods to Art Deco silhouettes. While Brabbu’s Vellum wall lamp, sculpted from hammered brass, sets a trend for luxurious metallic accents that can be seen throughout the home. To reproduce the look, think sleek, stark and keep accessorises to a minimum. 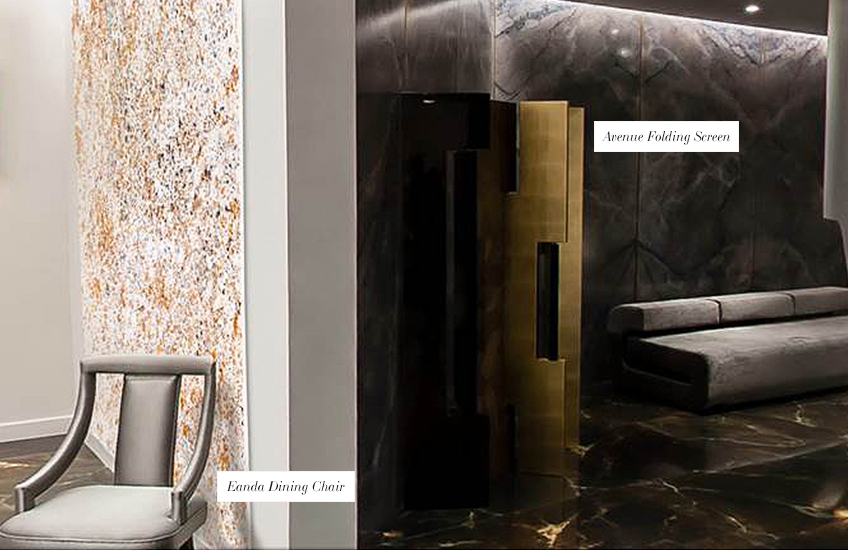 Emulate Christian’s style by filling your home with exquisite materials from floor to ceiling. The set design team infused Christian’s home with rich, inviting design choices that accurately mirror his exclusive tastes, such as Boca do Lobo’s Avenue folding screen which adds a sense of mystery to the enigmatic character’s space. Composed of six rotating panels finished in gold leaf, a high gloss black lacquer and mosaic of walnut veneer, the room divider is proof of his penchant for the finer things in life. And the luxurious materials don’t stop there as Brabbu’s Eanda dining chair – finished with tapering glossed ebony legs and satin cotton upholstery (which of course comes in a luxurious shade of grey) – makes up part of his tantalisingly beautiful furniture collection.

Dedicating careful consideration to the colour palette in each room and the way in which they tie together is another technique used in Christian’s home. The set design team played with contrasting colour schemes to reflect his complex character but overall the penthouse is unified by luxurious muted tones. This image from one of the bedrooms – complete with the elegant cream satin Desire sofa and chair – displays a restrained neutral colour palette and is the antithesis of the sensual red hues and leather upholstery seen in Christian’s ‘Red Room’. His living spaces continue to champion subtle luxe tones, such as dark browns, golden tones and grey shades, but occasionally incorporate bursts of bold colour. Be inspired by the confident inclusion of the irresistibly soft teal rug and plush deep green velvet curtains, there to shut out city’s skyline at night-time. 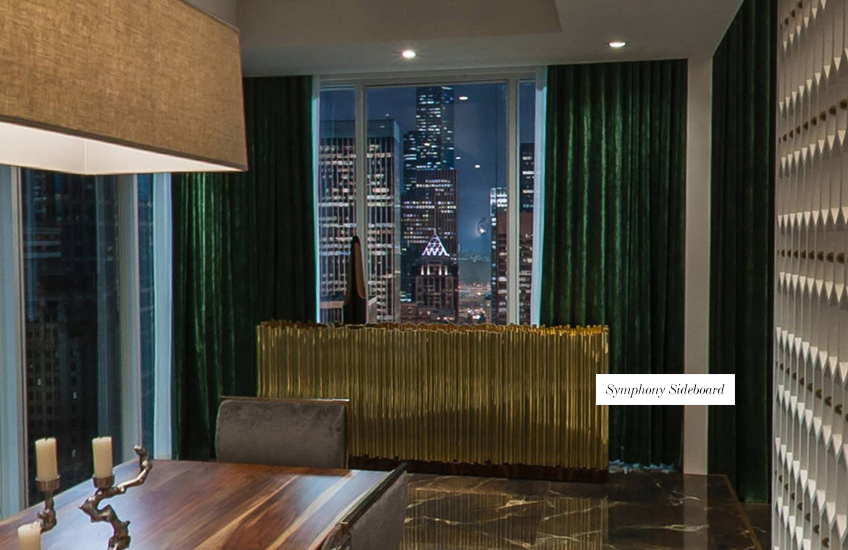 Christian is passionate about the arts, from classical music to great literature, so it’s no surprise that the team behind the set made a conscious decision to fill his apartment with artistic creations. Whether it’s the Boca do Lobo Plaza coffee table or Koket’s Burlesque console table, the entire house is enriched with sculpturally inspired forms that achieve high-impact in the otherwise minimalist space. Have-to-have pieces include Delightfull’s Coltrane table lamp and Boca do Lobo’s distinctive Symphony sideboard, whose polished brass facade is inspired by musical pipes. Modernist vibes are peppered throughout the apartment thanks to wooden masterpieces such as the Sequoia table by Brabbu, topped with a walnut root veneer and finished with aged brass base. 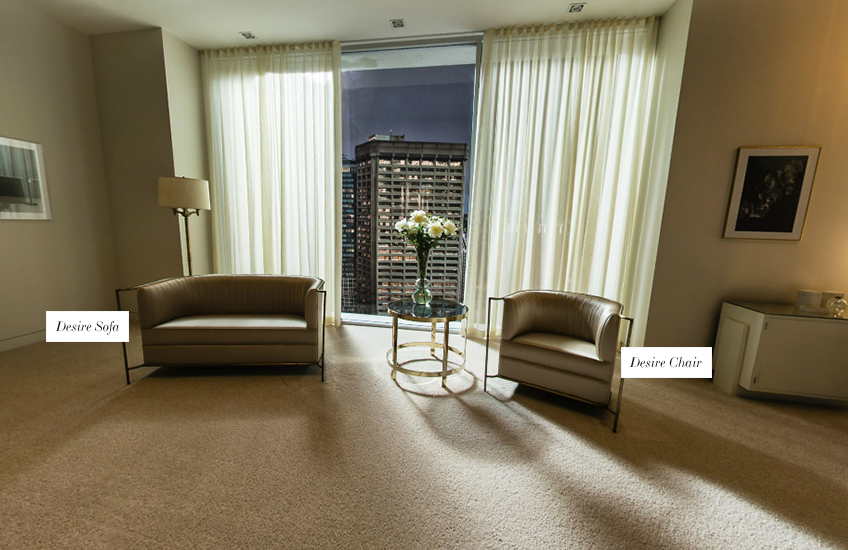