New York City is known for its urban skyline, unabated buzz and gritty vibe but sometimes – just sometimes – a hidden respite can be found in the bustling metropolis. Central Park is perhaps the City’s most recognisable green space but it’s Gramercy Park which offers the privacy so many Manhattanites crave.

Speaking of his recently completed project in the prestigious area, NYC designer Bennett Leifer recounts, “We sought to create a serene environment that would appeal to a traditional aesthetic, but honour the location and heritage of the neighbourhood. Gramercy has a rich design and architectural history but also a very strong natural appeal due to the landscape of the park.” 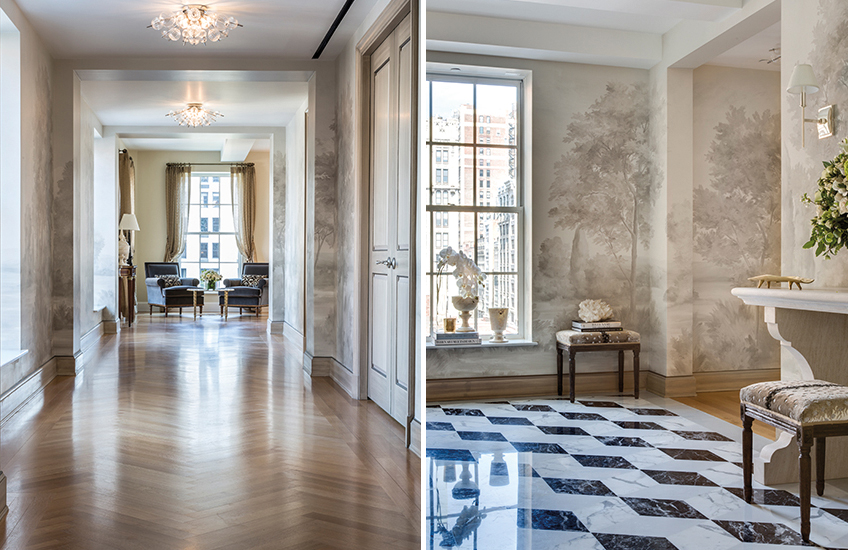 The much sought-after area – loved by celebrities such as Jimmy Fallon and Julia Roberts – is renowned for its exclusivity. Since 1844 the eponymous private park (New York’s last) has been locked, allowing access only to residents who have been granted one of its reported 383 keys. A fine establishment well worthy of tribute then.

Bennett’s most notable homage to the leafy neighbourhood (and perhaps the pièce de résistance of the entire home) is an ethereal hallway decorated in an updated classical style. Featuring the halcyon scene of a pretty pastoral landscape via a digitally printed muralpaper by artist Susan Harter, the hallway invites the area’s beloved greenery into the full floor, 1927 pre-war residence. A pared-back misty hue, which connotes the stillness of early morning light, successfully translates traditional trompe l’oeil into 21st century speak – a coup which characterises Bennett’s sympathetic yet refreshing treatment of history and something which testifies of his past experience as senior designer at three AD100 firms. 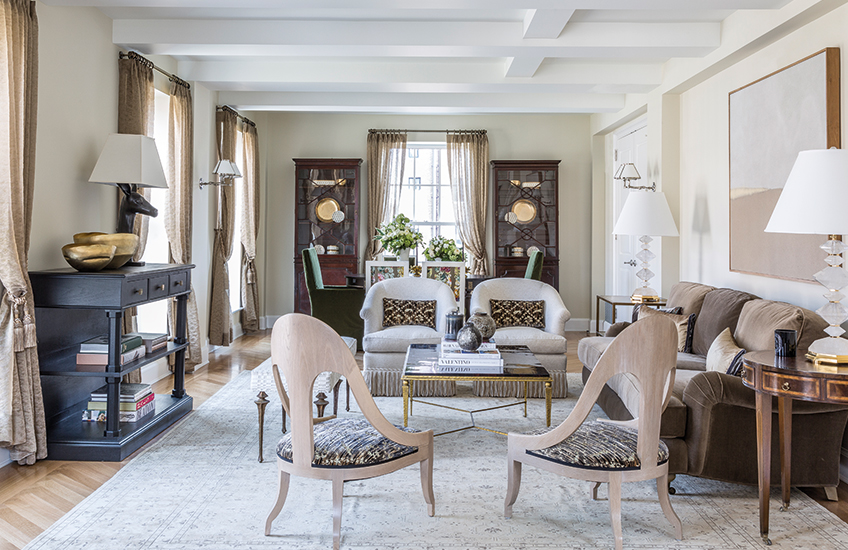 Floored with a tri-coloured marble pattern, the space is designed with its surfaces in mind by forgoing much by way of furniture and accenting with raw crystal objet and alabaster pedestals in a confident move. A classically simple stone console is joined by two entry stools upholstered in an antelope stripe velvet in what might seem an unexpected choice. “[It] makes perfect sense to me!” Bennett admits, “I have the romanticised image of two animals trotting through a garden,” making one feel silly to have not come to that conclusion previously.

The remainder of the apartment is less theatrical in its use of artwork and for good reason too. “The location of this project is so coveted that I tried to honour the views as the artwork,” Bennett explains, “I used framed pieces sparingly and tried to incorporate sculpture and imagery into the furniture profiles and finish selection.”

The living/dining room, for example, has one singular canvas – a work by Susan Vecsey entitled Napeague Bay, Montauk 2012 – but its six windows and their views, framed by drapes in Rubelli’s Eclissi fabric, create the artwork. “We mixed antiques, pastoral and animal print patterns [and] rich fabrics but also kept the palettes and furniture arrangements simple as to not overwhelm,” the designer – who founded his firm in 2013 – says, “I really appreciate the overall light and airy feeling of the space.”

This he did, he says, by using delicately legged furniture and open-framed chairs both of which are found equally in the room’s antique and contemporary pieces. This interplay too seems to be Bennett’s expertise which makes sense since he’s trained in art history. In a way which only the most well-experienced designers can, he shrewdly blends storied pieces like the reeded metal coffee table with custom spoon-back occasional chairs and skirted armchairs in a merging that’s almost indiscernible. Tall mahogany cabinets, peppered with pieces from L’Objet’s Fortuny collection, create a sense of grandeur to the dining arrangement whilst a Demiurge doe lamp, a Mark Bankowsky bench and carved rock crystal lamps from Phoenix Gallery add a sculptural element to the space.

“The home is very calming and peaceful [and] the colours of the park inspired me to use earth tones and green hues,” Bennett reveals, “[It] has fairly unobstructed views and is so quiet, which lent itself to the use of calming neutrals.” No where is this more true than in the airy master bedroom.

The space’s wonderfully refreshing ivory background acts as the perfect blank canvas for a truffle-hued, button-tufted bed with lion paw feet (a touch Bennett notes as one of his favourite elements of the home), a richly grained veneered chest of drawers and moss green velvet upholstered stools, topped with damask cushions. A button-tufted wingback sits alongside a marble-topped Empire pedestal side table in one corner and, in another, a Federal sofa and personal decor vignette make the most of additional space. 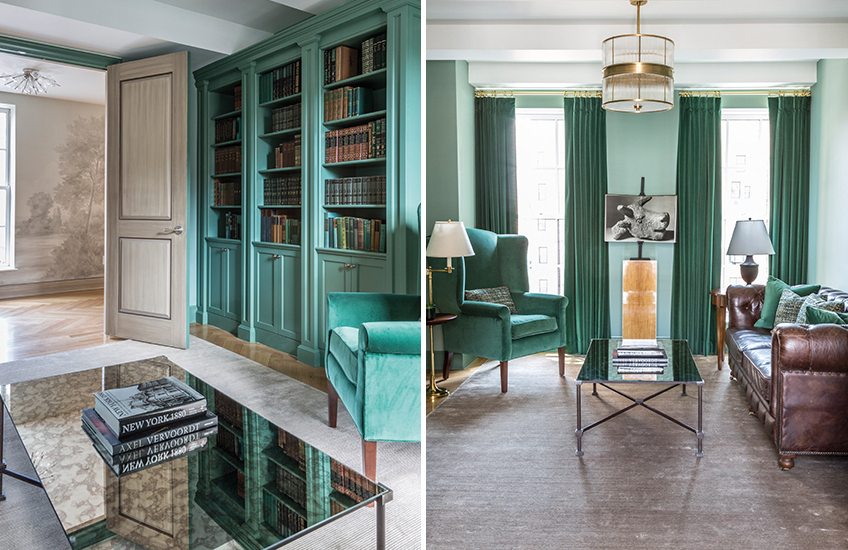 In what was originally foreseen as the most difficult element of the commission, Bennett transformed the home’s various secondary rooms into functional spaces which round out the residence’s offering. One became a double office complete with rustic furniture and an earthy colour palette which is nothing if not completely welcoming. Its reproduction Neoclassical desks and simple wooden framed artwork are offset by subtly lustrous fabrics, sophisticated alabaster lamp and buttoned chaise longue.

Another he reimagined as the home’s most colourful space – a mint and Persian green library furnished with a coordinating velvet wingback armchair, statuesque curtains and an antiqued brown leather chesterfield sofa which pops with boucle and velvet cushions. A swing arm floor lamp with an integrated table surface and an antique glass-topped industrial coffee table add little weight to the room which cleverly offsets the traditional built-in shelving. 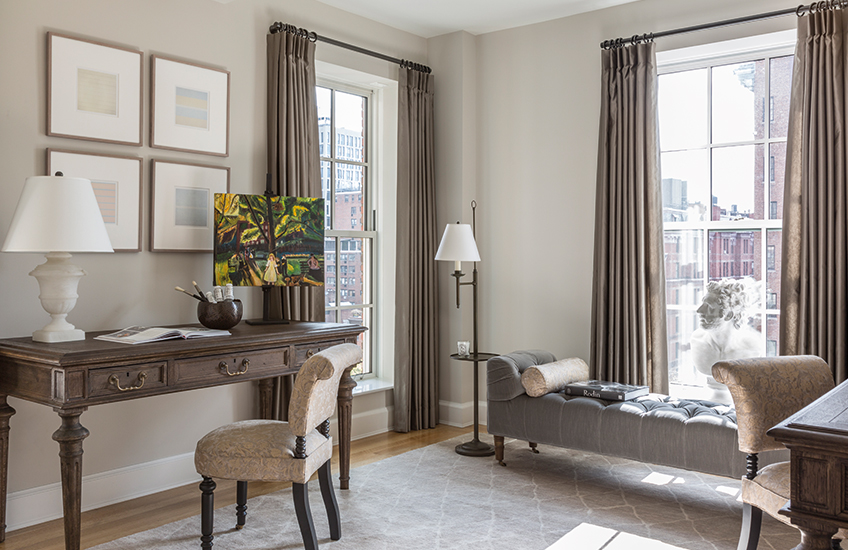 Like the library, the kitchen also draws on more colourful elements, being informed by a braid-trimmed, jewel Missoni pattern (“[it] is timeless, and the embroidered element is a classic technique that marries well with the traditional style”). An informal two-person dining area is comprises of classic button-tufted armchairs in a muted cerulean hue and round country table in what must be one of the most used areas of the home. 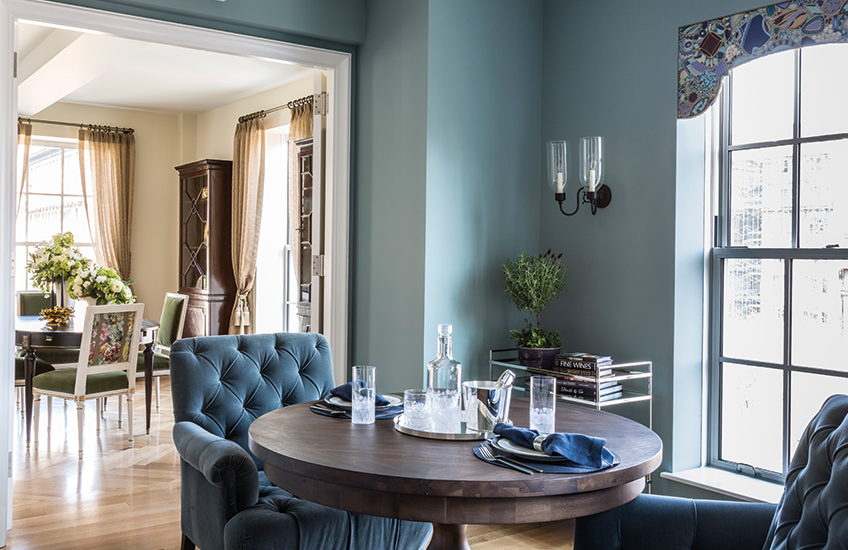 “For me, it’s about a balanced and well thought-out composition,” Bennett says in a humble way that makes one realise there’s much more to this project than he would have us believe. The home, a class-infused retreat in a less-than-laid-back city, is testament to a much greater design mind which is one to watch.

Behind The Brand: Kim Seybert

From the runway to the tabletop, the glamour of Kim Seybert tableware is undeniable