Chandeliers, by nature, play the leading role incredibly well but are sometimes considered too formal, suitable only for grand spaces or even gaudy (we’ll admit that there are a few of those around but just trust us). However, something with such style authority shouldn’t be discounted too readily.

“A statement chandelier is one of my most favourite design elements,” says Linda Holmes, LuxDeco’s Interiors Director, “because it instantly draws the eye and gives confidence to a room.”

Apparently many interior designers are in favour of a statement chandelier and – not only that – they’re reinventing the idea of the time-proven design. Unconventional spaces such as libraries (like the one above by Buckingham Interiors + Design with its incredible urchin luminaire) are earning some serious style points on account of their chandelier choices and increasingly interesting materials and shapes are joining the ranks.

In this round up, discover some of the lighting world’s most impressive designs and what the interior designers who use them have to say. 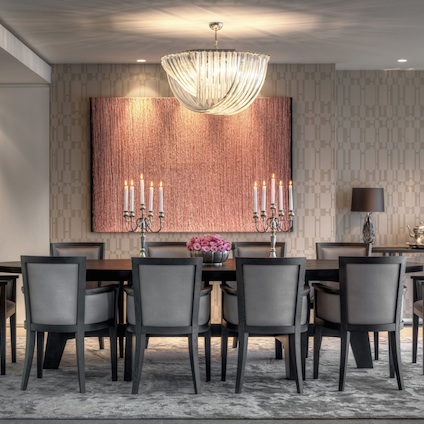 A draping antique Art Deco pendant is the token glamour piece in this stylish modern dining room by Portuguese firm Casa do Passadiço.

Challenging the expectations and abilities of its material (as Art Deco decorations so often did), the pendant’s perfectly aligned, translucent glass arcs mimic the appearance of swathed silk. Its light source is fully concealed exuding an ambient glow which balances the smart dining arrangement below. The delicate design – sourced in Antwerp – is teamed with traditional silver candelabra and a textured salmon pink wall canvas. 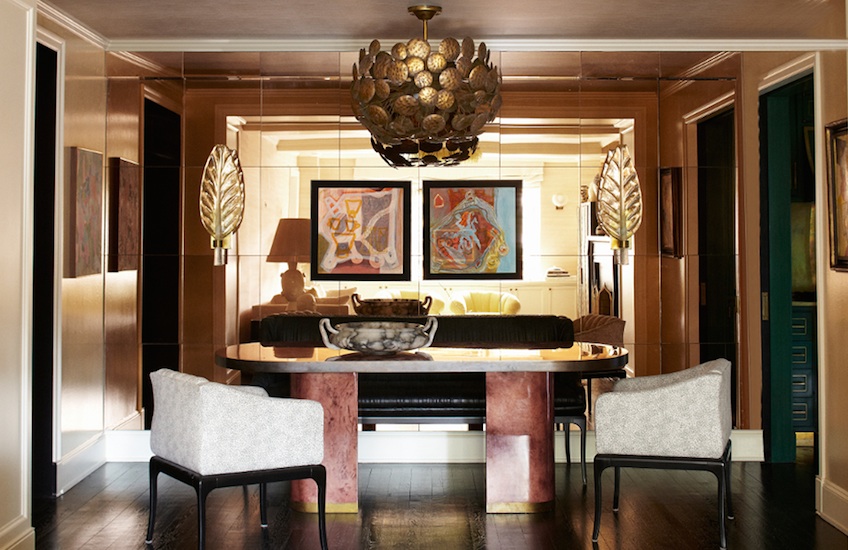 The brass show-stopper is composed of a bouquet of metallic discs which is as timely now as it was half a century ago. Forever a fan of unique pieces worthy of a double-take, Kelly explains, “I view my interiors as sculptures. I want to create a sense of adventure with artful pieces that tell a story.”

What could turn the traditional London townhouse aesthetic completely on its head? A dangerously stylish spiked explosion, of course, which is exactly what the talents at Helen Green Design were thinking when they furnished this Belgravia home.

The vestibule is a balanced combination of classical features (monochrome tiling and cornicing) with expressive decor (modern canvases and painted pottery), which are both offset by the surprising addition of the dynamic piece which bears a striking relation to the ever-popular sputnik light. Plus, by cleverly positioning it in a mirrored space, impact is instantly doubled. Genius.

Who says a dining room can’t be fun? This trio of jack-shaped chandeliers with exposed lightbulbs – reminiscent of iconic funfair signs – aren’t the only playful thing in this unconventional dining room.

The staggered perforated brass tables play with traditional arrangements whilst a nearby gallery of hanging artwork is a cool alternative to a mirror. The graphic trend is mirrored in the rhombus-patterned flooring resulting in a room which screams ingenuity. 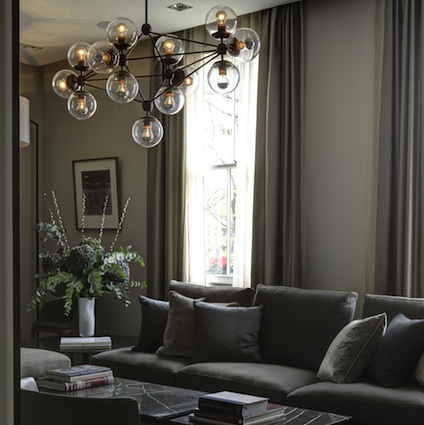 “The Modo by Roll and Hill is of the best examples I’ve found of a contemporary chandelier,” explains Monique Tollgård – one half of the husband-wife team at Staffan Tollgård, “It isn’t a pendant – of which there are many wonderful examples. Instead, with its individual globes interlinked with the metal structure, it is a true statement chandelier enfused with all the wonderful contemporary aspects of sleek minimalism and a modern sense of craft.”

The industrial piece sits well in this informal masculine space where – with dimmed bulbs – it adds atmosphere to an intimate arrangement.

Concentric halos of faceted, jewel-like prisms are all this chandelier needs to match the modern elegance of its sophisticated living room. The slender prisms – timeless contemporaries of scalloped chandelier pendalogues – make for mesmerising light refractions.

The piece hangs above a carefully arranged seating area where its vertical lines are matched by the tuxedo sofa‘s quilting and its fine metal frame is echoed in the silhouette of the barely-there coffee table. 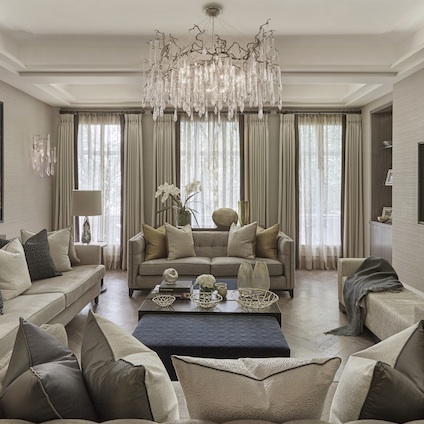 Bringing the outside in, London interior designer Laura Hammett incorporates a glittering lighting display into this heavenly living room. Glass droplets hang from a branch-like structure giving the muted space a captivating focal point which is evocative of a bare tree touched by a winter frost.

A soffit ceiling is an appropriate location for a feature chandelier as its recessed canopy results in increased height which permits a greater drop – ideal for those stand-out chandeliers. Add to the mix ambient, architectural lighting which draws even more attention to the chosen piece and the result is sheer perfection.

For more on how to light your home, follow our luxury lighting guide. 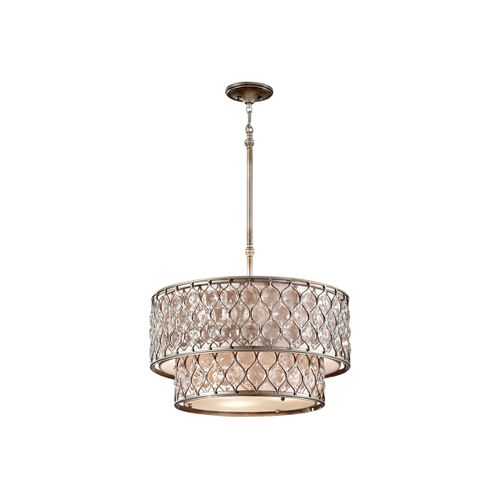 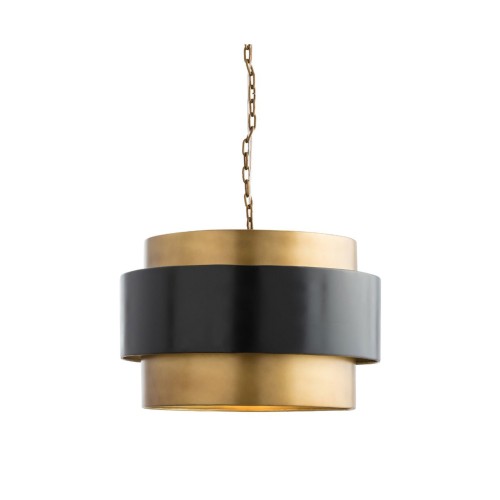 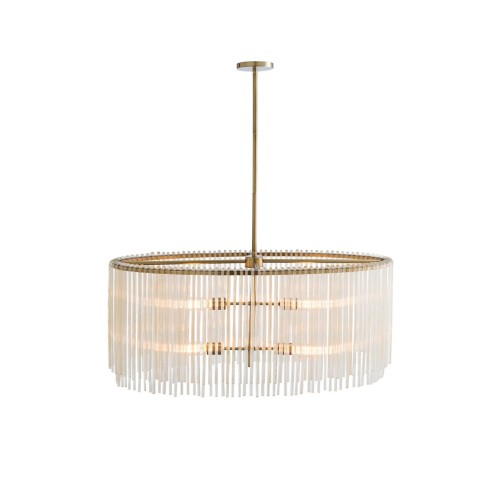 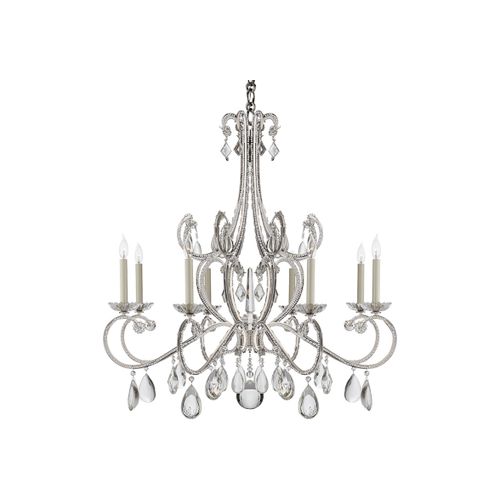