In an age when flights can get us from A to B with such immense speed and advanced safety, you’d think that planes from the past wouldn’t even compare to modern-day aircrafts. Yet when you look back on some of the luxurious airliners of the 60s and 70s, with expansive cabins featuring on-trend furniture designs, cocktail lounges, powder rooms and even restaurants with the most decadent menus, it’s fair to say that the glamour this mode of transport had in previous decades has been somewhat lost over the years.

The notion of flying in true style is having a revival, however, thanks to the arrival of the British Airways’ new Boeing 787-9 Dreamliner. The plane – set to fly to destinations including Abu Dhabi, Delhi and Kuala Lumpur by the end of year as well as Austin and San Jose in 2016 – is firmly bringing icon status back to the skies with its carefully honed interiors.

Created specifically for the Boeing 787-9, the plane’s First suite has been cleverly designed based on feedback from their First customers, who know more than a thing or two about style and comfort it seems. Uncompromising on exclusivity and privacy, the cabin includes just eight seats in comparison to the 14 seats typically available on other British Airways long-haul aircrafts. And that’s only the beginning of a very beautiful bigger picture. Its interiors put a sartorial spin on just about every aspect of the cabin, from the premium materials that swathe the entire suite to its dark and sophisticated colour scheme highlighted with cream panelling. 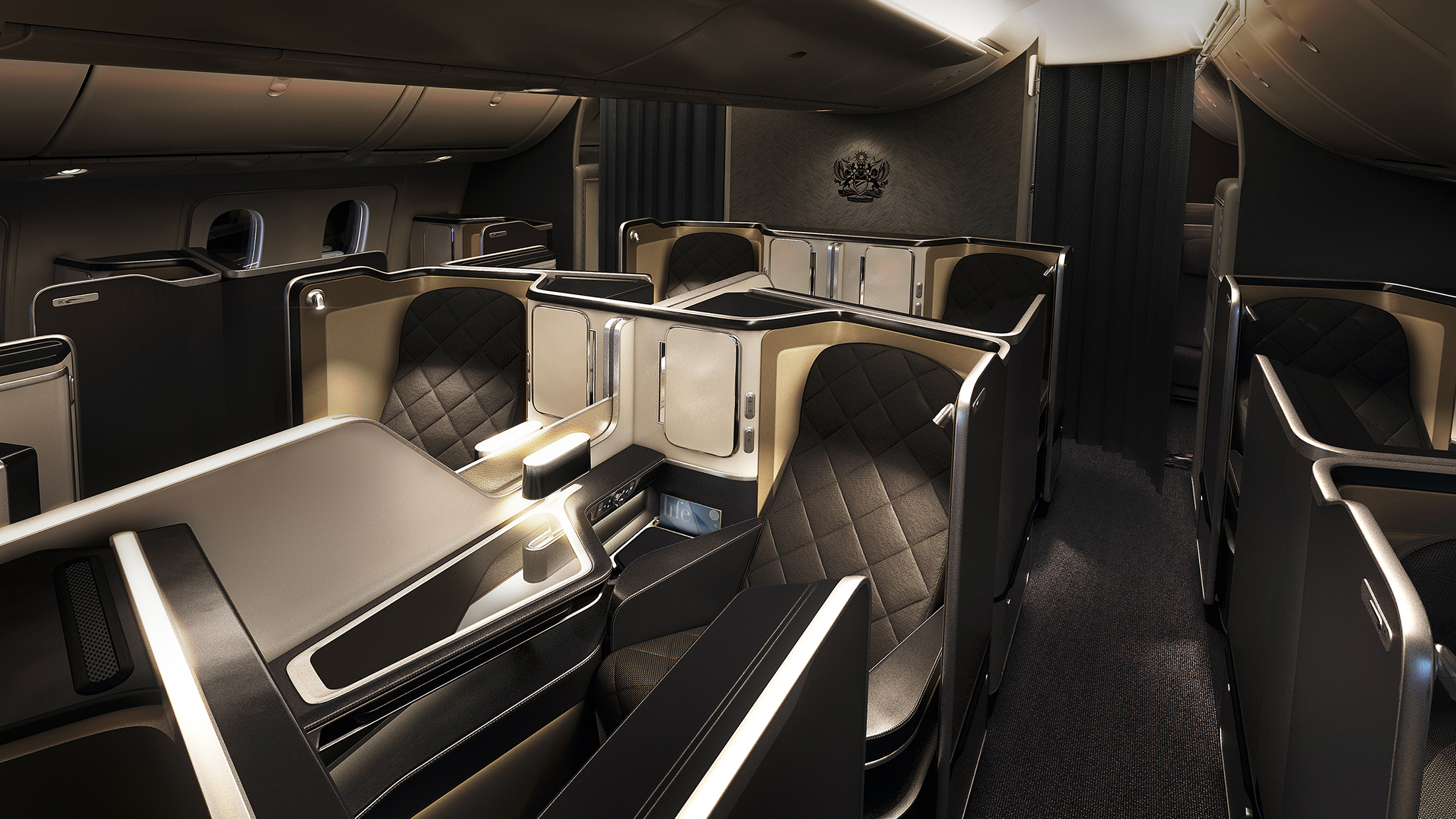 But BA and its First customers can’t be praised alone for working together to tailor the ultimate ride: it’s a three-way partnership between them and leading British suppliers that’s been integral to the creation of this super-plane. The seats, for example, are not only reclined at just the right angle but beautifully upholstered by Prototrim – the top quality seat trimming expert responsible for those game-changing finishing touches inside the likes of Bentley and Jaguar cars. For this sky-high motor, the material specialist developed a high quality soft leather for the seats, opting for plush quilting and a neat fabric trim to finish.

And it’s not just the touch test that the cabin passes with triumph: a large part of its inviting ambience comes courtesy of the bespoke lighting delivered by London-based lighting specialists Pritchard Themis. Helping jet-setters to drift off to sleep at night and wake up in the morning, the illumination in each cabin can be set to reflect the natural time of day. A feature which, alongside the huge windows that give horizon views to every seat in the house, demonstrates the Dreamliner’s impressive efforts to ward off sensations of jet lag and keep travellers feeling fresh during and after their journey.

As with any luxury vehicle, we like our air cabins to deliver function on top of form, so four new storage areas have been added to suites. A personal storage compartment for coats and jackets can now be accessed from the comfort of your own seat, while an ottoman next to an adjustable footstool provides a home for shoes, handbags and other personal items. 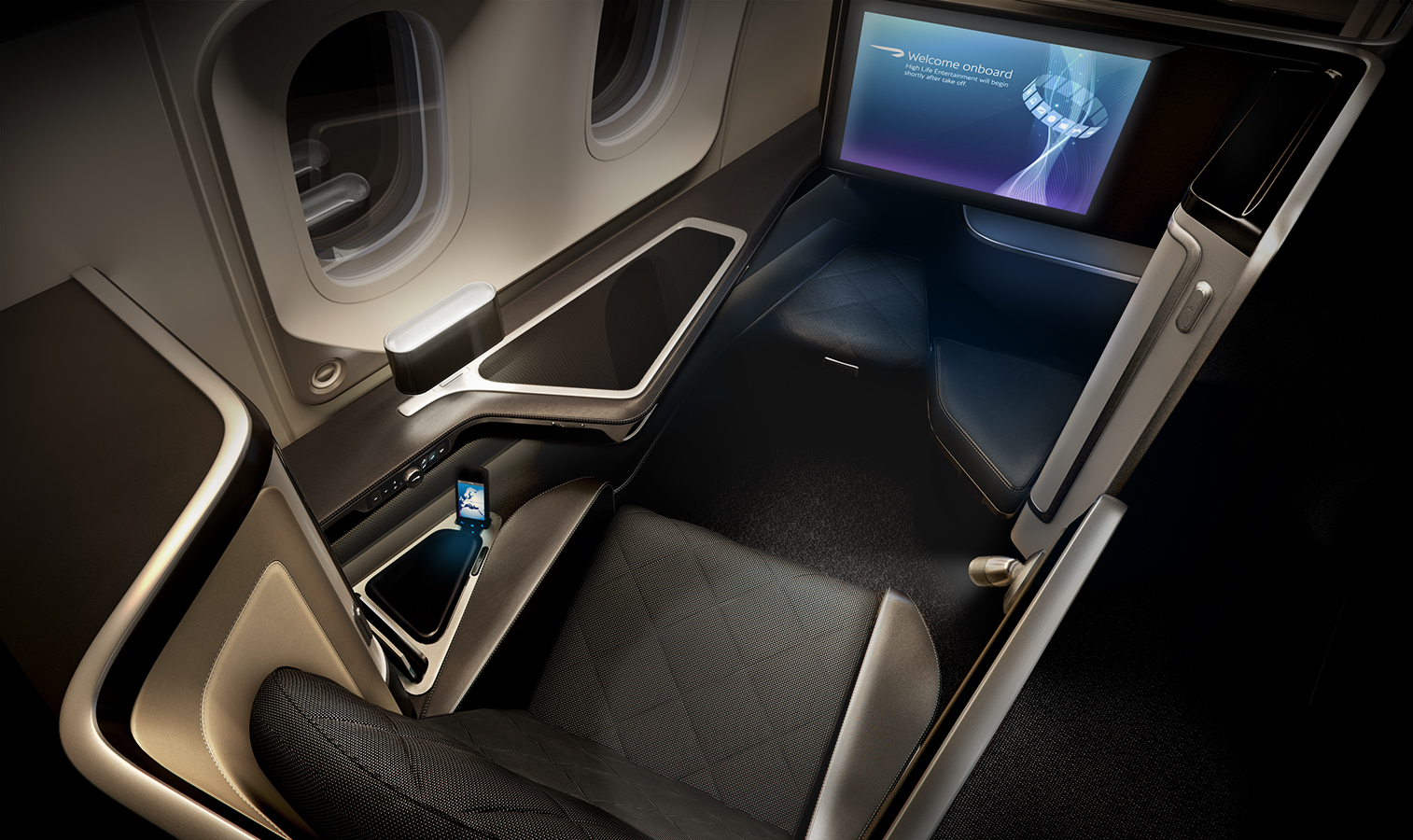 The addition of a new locker – thoughtfully positioned at eye-level – lessens the awkward stretching that sometimes comes with on-flight storage systems, and offers a perfect place to keep those smaller items that you really don’t want to lose, such as tablets, spectacles, wash bags and your passport. A mirror fitted inside the locker door means personal grooming while gliding becomes an effortless task.

Keeping their finger on the pulse of our ever-increasing craving for tech in the here and now, BA have made the luxury plane interiors as tech-orientated as possible, enabling travellers to control the functions of their suite with a simple, intuitive touch as well as charge devices in the discreet stowage area next to their armrest.

It’s usually only the on-flight entertainment that can get you through the final hours of a long-haul journey, which is why the seat and entertainment console has been updated with a new smartphone-style handset that’s integrated into the seat for easy-access control. During flight, the handset can be docked so that passengers can watch one feature on the handset – whether it’s a movie or the interactive flight tracker – and another on the 23-inch fixed screen. This also means travellers will be able to enjoy gate-to-gate entertainment and don’t have to think about stowing their television for take-off and landing.

To enter an even greater realm of tech bliss, the smart ‘jog-dial’, which previously controlled seat recline, is now your go-to for five additional functions, including inflating the headrest and lumbar in addition to acting as a ‘global’ lighting control to set ambient and reading lighting. 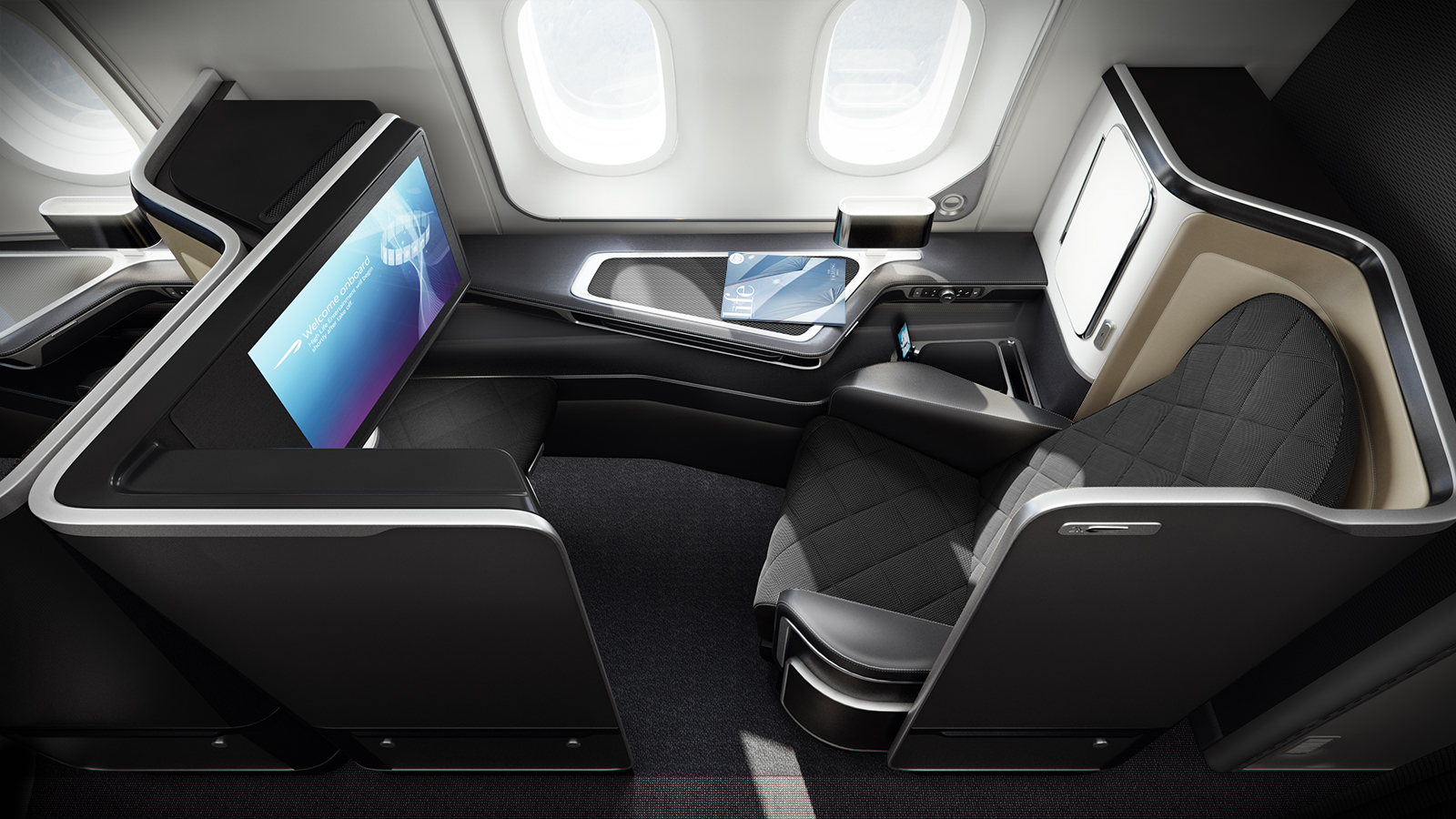 We’re seeing more and more instances of technology and luxury paired hand in hand, and the Dreamliner marries the two concepts impeccably to create an aircraft that introduces a new class of flying. A synthesis of forward-thinking design and British Airways’ heritage, the plane draws on the airline’s wealth of experience in customer service by making sure every possible essential need, simple want and itch for that something extra is covered, right down to the perfecting the air we breathe on board. Different pressurisation means the internal cabin altitude is the equivalent of 6,000ft – 2,000ft lower than other aircrafts – which leads to greater humidity and reduces the drying effect of cabin air. The plane’s smooth ride technology also provides extra comfort during any turbulence.

Putting sublime comfort levels, on-point style and the ultimate use of intimate space at the core of the experience for travellers, it’s safe to say the Dreamliner positions itself as not only by far the most luxurious recruit to join the British Airways fleet but the summit of aviation excellence.

Seats for the Boeing 787-9 Dreamliner are now on sale at ba.com.

6 Luxury Retail Store Interior Designs We Want to Live In

Happy & Colourful Rooms To Pull Us Out of Our Lockdown Low