Don’t get us wrong, we’re lovers of the masters – those designers who have secured their place in the history books of interior design – but we’re also suckers for fresh talent. Starting with Elicyon (which is responsible for the incredible New York City pad, above), we tracked down the most promising new interior designers who are moving and shaking the industry right now.

“Tailored environments”, the tagline for London design studio Elicyon, seems to be the most concise way of conveying its skill to deliver both pinpoint interiors and spaces which are perfectly suited to each and every one of its clients.

Concerning style, the studio’s quintessential look is one of super luxurious proportions with plush finishes, the finest materials and sophisticated transitional furniture with a contemporary opulence to tie everything together into a welcoming environment. Oversized light installations and confident interior architecture result in projects which are as much experiential as they are liveable which makes for interior design which aims to progress the industry.

The firm’s luxurious aesthetic shouldn’t come as a surprise since the 12-people-strong team share a stellar history with the city’s most prominent interior names. Founded in 2014 by Charu Gandhi (an alumna of Candy & Candy during the One Hyde Park days), Elicyon comes with a power of experience in the ultra high-end realm and is proving itself worthy of its past experience with noteworthy projects in the capital and beyond, including a celebrity commission in New York’s Upper East Side.

Explore the rest of the firm’s Bayswater project (above) here. 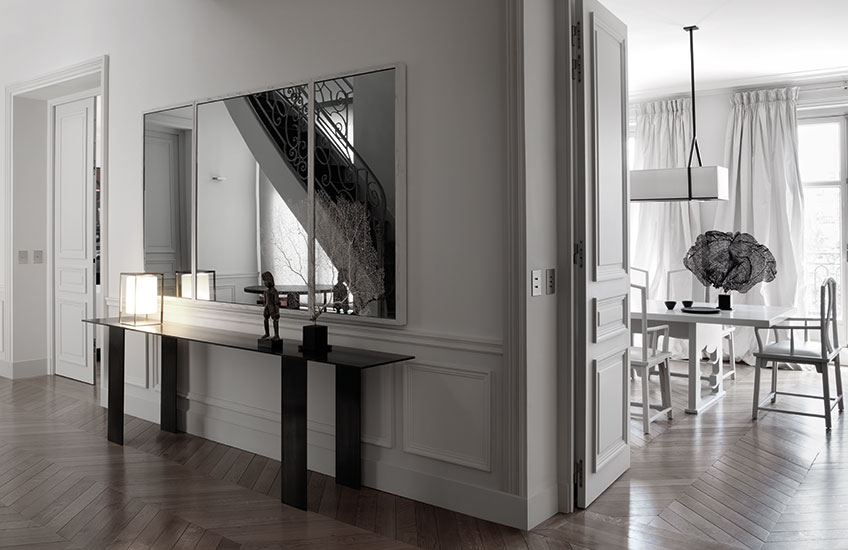 With a client roster which includes YSL, Dior, Chanel and Tom Ford, Parisian designer Guillaume Alan and his minimalist furniture has been sought-after by the greats for many years now, however, the designer is ready for a new challenge. Starting last year, the creative is making a concerted effort to expand his interior design portfolio and secure the title of decorateur ensemblier. And the interiors gods rejoice!

Typically Parisian in his use of clean lines, airy palettes and casual chicness, the principal lives by da Vinci’s mantra “Simplicity is the ultimate sophistication”. This simplicity is the perfect tonic to the unthoughtful use of over-design and unnecessary decadence within the industry. Pure white backdrops are enhanced with dark wood whilst traditional architectural elements are offset by pieces which have been pared back to their purest form. Upholstery pieces offer second-to-none craftsmanship and a masculine simplicity which recall gallery spaces. Wooden coffee and dining tables find themselves side-by-side with Eastern inspired splat-back dining chairs.

With the help of Emilie Le Corre (who runs the Paris and London design studios), Alan continues to establish his reputation for effortless style, although it could be argued that there’s nothing effortless about it. And 2016 proves to be a busy year with three new projects in the pipeline.

Hear what Guillaume has to say about mastering Parisian style here. 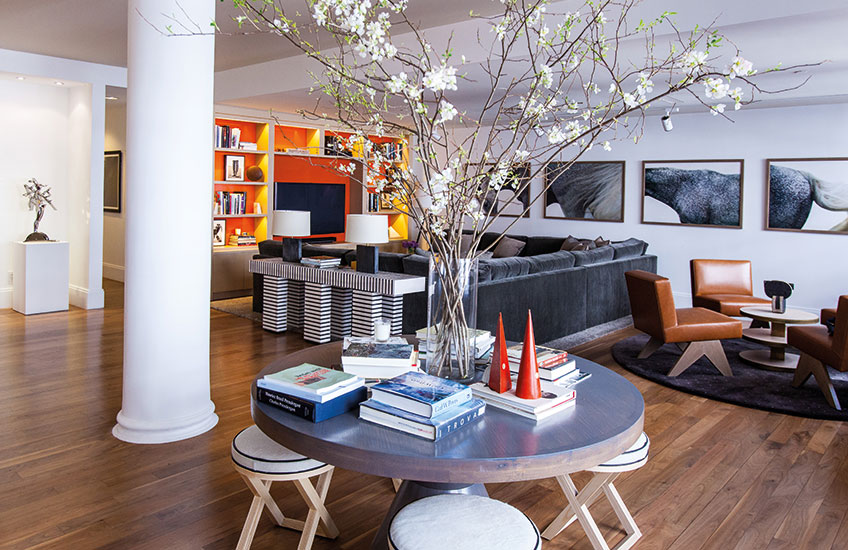 Samuel Amoia first came onto the radar through the unconventionally beautiful cement and mineral furniture creations of AMMA Studio, a joint venture with fellow designer Fernando Mastrangelo. Having now moved on from AMMA Studio to Samuel Amoia Associates, Samuel’s designs are gaining traction with the industry’s most admired aesthetes – a recent commission from the indomitable architect Peter Marino is indication that Amoia is a name we’ll hear more often. So it is with keen interest that we follow Samuel Amoia Associates – Samuel’s venture into the world of interior design.

The New York firm’s portfolio is characterised by a laid-back New York aesthetic mixed with a cultured Parisian attitude and a touch of contemporary Mid-century Modern. Pops of unexpected colour perk up predominantly neutral colour palettes which lean towards the earthy; bright Maximalist canvases and graphic wall sculptures adorn the walls whilst untreated ceramics stand on plinths creating an open approach to art collecting; and furniture is admirably unpretentious yet individually considerately designed, eclectic yet cohesive.

The team are currently involved in residential projects in New York, Miami and LA as well as sinking their teeth into commercial projects around the globe from a high-end hotel and residences in Belize to a matcha tea house in Australia. And with an accessory and lighting collection launching this spring and a special production for a haute couture designer in the works, the company’s product design section is also gearing up for an exciting year. 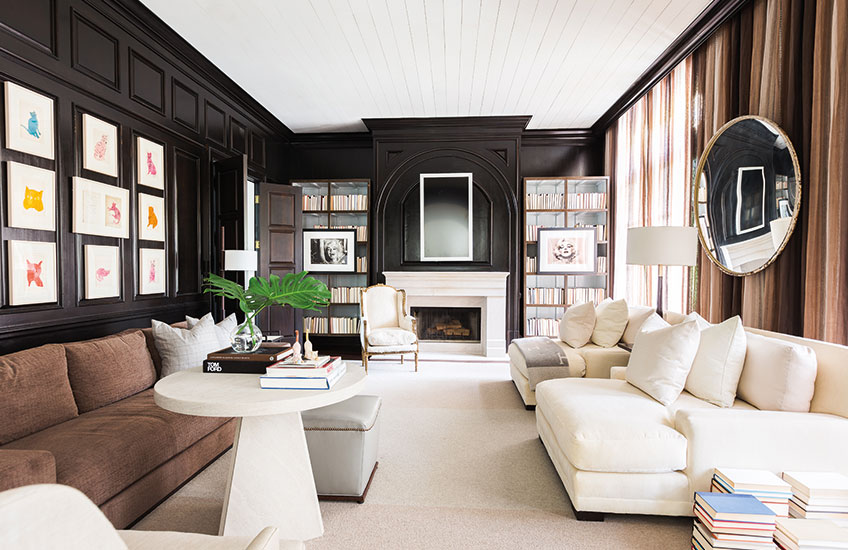 Now in its fifth year and already highly regarded, interior firm Chad James Group is one of the American South’s most exciting studios and one which shows great promise of becoming a major player in the American interior design scene.

The Tennessee firm’s principal and eponymous designer is known for his fresh environs where he’s more than happy to use bright white textiles where others would shrink, billowy floor-to-ceiling drapes and interesting use of scale. And although he makes a point of using less refined finishes in his designs, such as aged woods and reclaimed metals, they still end up looking perfectly smart thanks to touches of French Neoclassical furniture, well-curated artwork and a “less is more” approach to colour.

Barlow & Barlow, the collaboration of siblings Lucy and Max, shows promise of being a firm which is more than a one-trick pony. Not only does its portfolio show examples of the sibling’s penchant for an almost forgotten interest in classic, refined style, it also appeals to the risk-takers with bold choices and a nonconformist approach to design. Their respective career history blend – Lucy trained under the eye of traditional designer Mark Gillette whilst Max was a designer at the more contemporary John Cullen Lighting – is paying off it seems.

Also showing promise of being one of the few firms to break the mould of nondescript development projects, the London firm began in 2013 with its first – Gatti House on London’s Strand. It quickly found favour amongst neighbouring developments as word of mouth must surely have spread of its sympathetic treatment of the capital’s properties – a trait which can be attributed to head designer Lucy Barlow’s rule of referencing historical styles dating back to the 17th century.

This year, the sibling duo are applying their formula of interesting combinations and informed intuition to a new development, an exciting Dublin townhouse and a family house in London’s Holland Park.

“A beautiful interior is not just something that we see – it is something that we experience. A well designed space should engage the senses and nourish the soul,” says Joshua Smith which we can only respond with an “amen!”

Enter Smith’s consciously designed spaces which consider the actual role of an interior – to house a soul, a person, a family, each with their own emotional and sometimes spiritual needs as well as physical ones. The designer seems to understand that, although aesthetics aren’t inconsequential appendages to this truth, nothing is right in a space until those needs are met.

The NYC-based designer trained with AD100 interior design firm S. R. Gambrel before setting up shop on his own in 2012 specialising in transitional spaces which aren’t afraid to draw from the richness of the past or embrace the present. Traditional furniture shapes are modernised with painted ceilings in refreshing block colours, refreshed textiles and stylish decor choices.

A recent commission from Arianna Huffington to design the Huffington Post’s meditation room is a particular coup and testament to Smith’s expertise in creating comprehensive interiors which offer much more than the average interior. 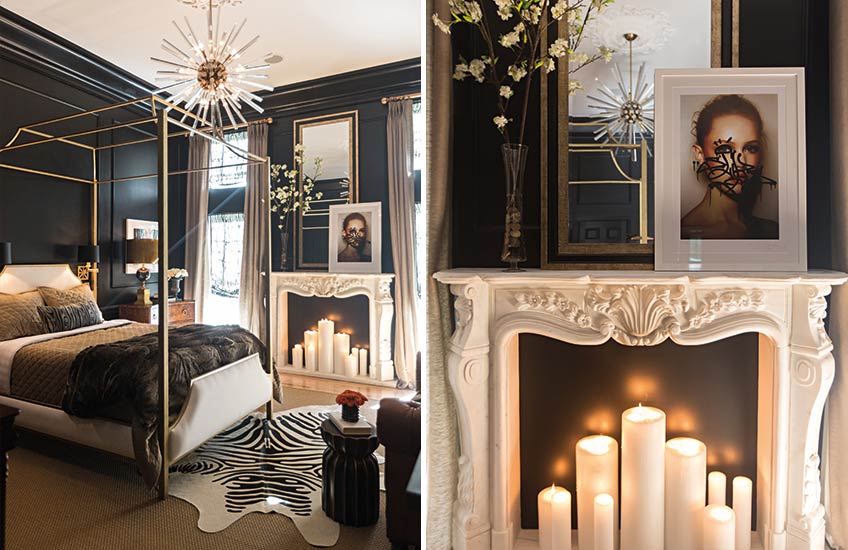 Jessie D. Miller a.k.a. The Design Daredevil is the epitome of a rising star with features on national television shows HGTV (Design) Star and The White Room Challenge and a trendy design aesthetic which she describes as “edgy traditional”.

Think Sputnik lights hanging over dining tables flanked in French style chairs and urns bookending modern artwork. Or large-scale palm print patterns adventurously contrasted with broad monochromatic stripes. Even her accessories challenge each other – marble busts look on to spiked urchins and geometric shapes in an eclectic cocktail. Her obvious penchant for colour isn’t confined to decor either as with less intrepid designers. Evidenced by dining rooms clad in a salmon pink raw silk wallpaper and bedrooms boldly painted in black, colour is alive an well at JDM.