Interior designer with a remarkable celebrity clientele Jeff Andrews is known for his southern-California-centric projects which flirt between disparate influences of glamorous Hollywood Regency, style-confident Maximalism and subdued Navajo. Transitioning away from his usual sunny climes, this year the designer set his hand to a new challenge – a 6 bedroom, 6 bathroom cabin on northern California’s Lake Tahoe.

With its carefully thought-out layers and select urban-turned-rural pieces, the cabin (or lake house, depending on the season), owned by a San Francisco couple to share with their three sons and designed by Nicholas J. Kromydas, ushers the traditionally alpine habitation into a new, design-conscious arena. The designer’s approach to the home’s interior exhibits a determined but sympathetic mindset, employing contemporary elements with natural ones befitting the home’s rural location. 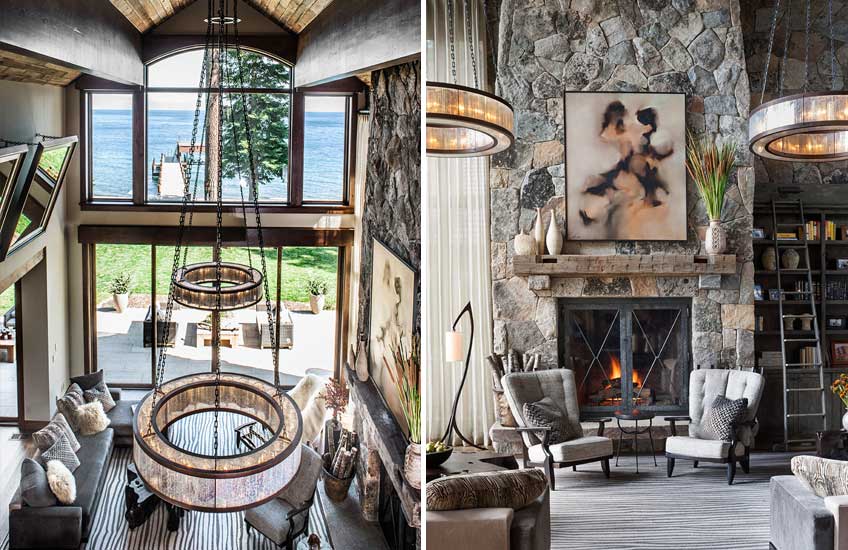 Not concerning itself with spoilers, the pièce de résistance is undoubtedly the double-height, vaulted ceiling living room. It’s the room one might imagine the family of five (and their guests) would spend the most of their time thanks to its inviting vibe and glorious scenery. Distinguished by its defining drystone wall and chimney breast, it enjoys views of the lake and the property’s grounds and private dock. Far from an easy room to dress, Jeff faced the challenge of the room’s vast scale and rugged aesthetic without trepidation. 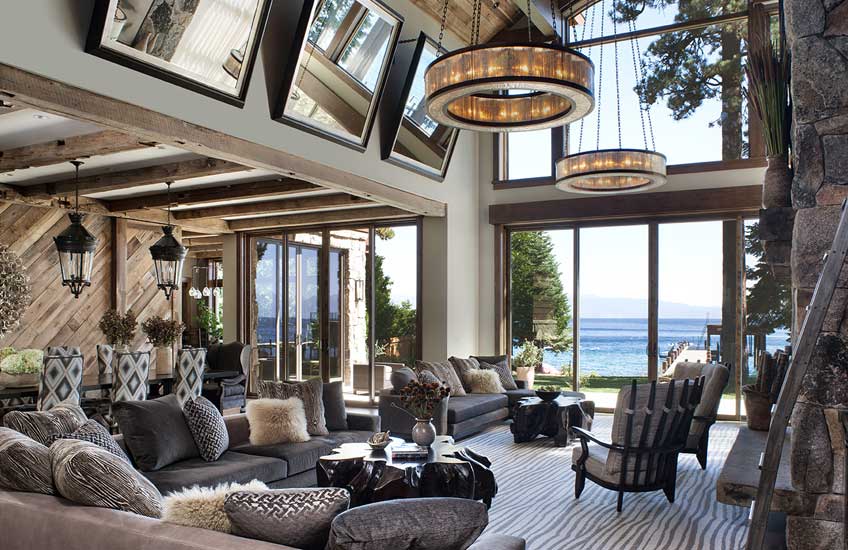 The room’s modern sectional sofas, by Mimi London, are dressed in an Edelman leather and a Designer’s Guild fabric in a harmonious palette of mole and taupe – perfectly metropolitan (they wouldn’t look out of place in an inner-city penthouse loft) but just as at home amongst the pines. A pair of Guillerme and Chambron armchairs take the scheme towards a more native look with their inherent Craftsman appeal as do the room’s two Paul Evans tree stump tables. Full-height sheers, fur cushions, an ethereal vintage oil painting by Bernard Gouttenoire and a sheepskin-clad Jean Gillon Captains lounge chair soften the space’s rough-hewn character. As a final reminder of its creator’s often glamorous ways, two halo chandeliers by McEwen Lighting Studio suspend from the wooden ceiling, combining industrial bronze and selenite-like glass. The room is reflected in the trio of mirrors which hang overhead – a unique way to envision anew a space. 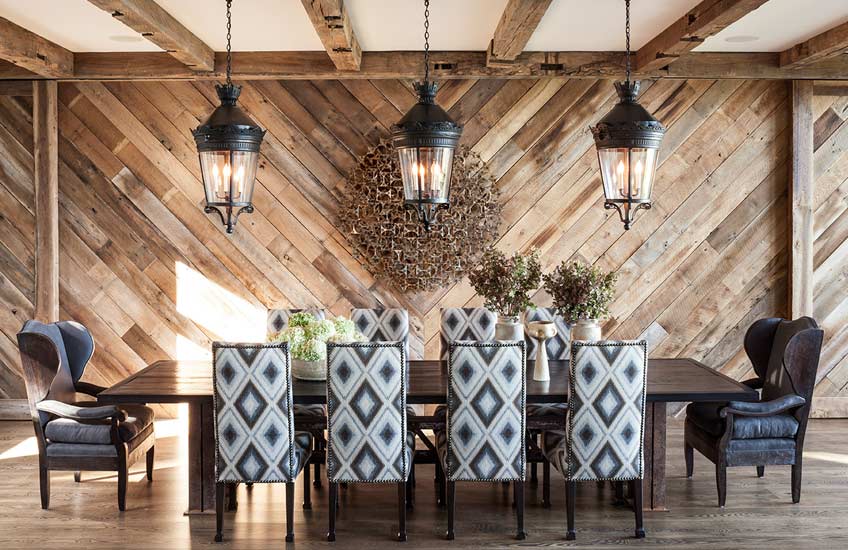 While it might not equal the living room in its grandeur, the adjoining dining room equals it in texture and unique antique additions. Like the seating area, the dining room makes a statement of a feature wall – this time a wall of chevroned, reclaimed barn siding. Jeff chose to set off the feature with a vintage wall sculpture from Blackman Cruz. The rest of the space is characterised by pieces which have had new live breathed into them. An industrial dining table (the base of which was once part of an old bridge) takes pride of place, surrounded by Kravet ikat-patterned dining chairs and low-key wingbacks. Above, suspends three vintage lanterns which had a first life as Parisian street lamps and have been restored to bring an element of old-world charm. 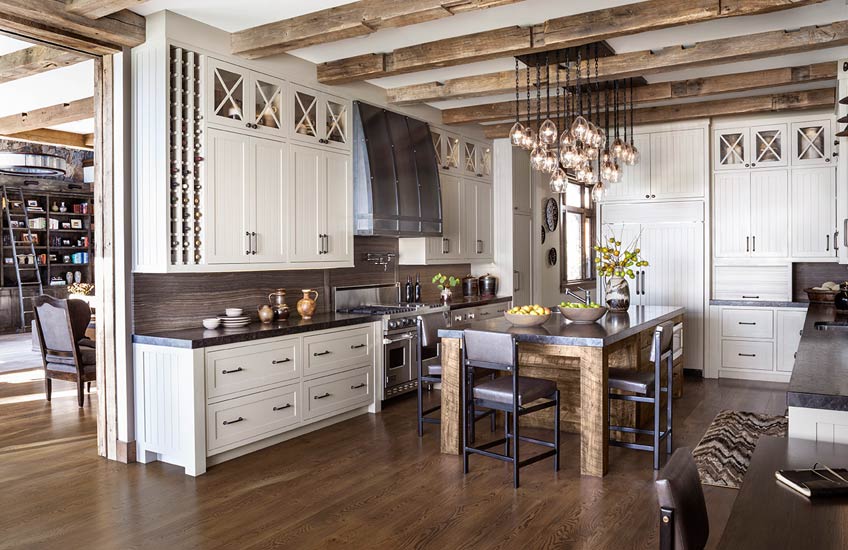 Taking up the remainder of the ground floor, the cabin’s kitchen-cum-informal-diner – a diversion from the standard aesthetic. Its design’s fresh rethink is the stuff of English country manor dreams, giving it a refinement often absent in similar properties. Beadboard cabinetry, off-white colour palette and open beams – the look could be straight from a Tudor country house. A central marble-topped wooden island and custom counter stools by Thomas Hayes act as an informal eating area, dressed with glazed pottery vases and bowls. Jeff’s own designs are introduced here in the form of a staggered glass and iron pendant installation. A second eating area (or the third designated area within a 20 metre-square area if including the dining room next door) sits in the morning sun towards the front of the house. Clearly this is a home where entertaining and interaction during daily tasks is valued. 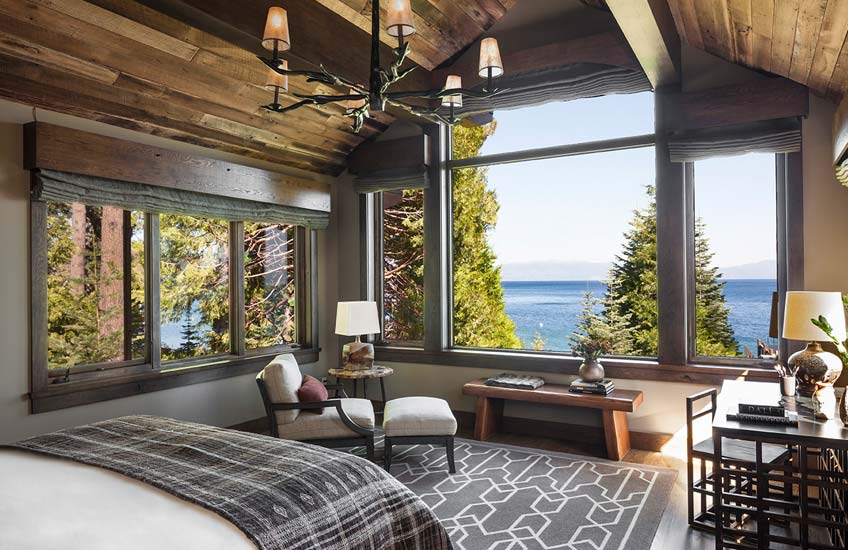 Making one’s way to the upper floors, the bedrooms retain a similar back-to-nature feel. The master bedroom, which, like the living room, is accented by a dry stone feature wall, is inviting and serene, aided by cosy lighting (its elegant branched chandelier is Jean de Merry’s Rêverie design) and relaxed furniture. Facing out over the tranquil scene sits an A-Rudin lounge chair and ottoman, upholstered in a checked De le Cuona fabric – the modern descendent of the woven textile of the nearby bed throw. With a familiar geometric pattern, the custom area rug by Scott Group Carpets also harks back to indigenous prints. A custom desk and chair by To Do Something becomes a haven for low-key working thanks to the warming sunlight offered by its window. 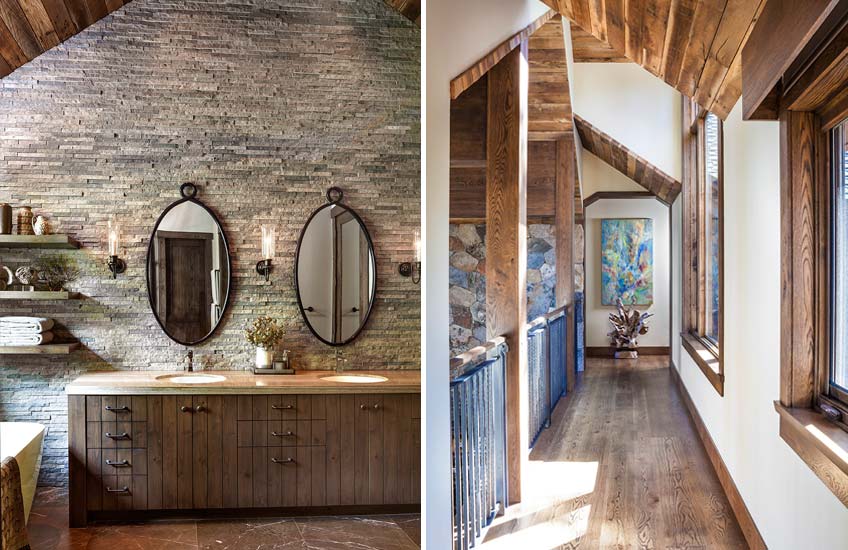 Not that one would want to do much work in this home. The location is positively heavenly, the sofas far too tempting and the crackling fire demanding of some attention. The perfect post-Christmas getaway one would imagine.