Join the movement and support the world's leading small and independent design brands and artisans.

There are developments after developments, newsworthy restaurants and iconic restoration projects but there are very few places like Squat London – an interdisciplinary and eclectic interior collaboration between two influential design authorities. As the fifth edition (after previous editions in Paris and Beirut) of the nomadic concept initiated by Nina Yashar of Milan’s Nilufar Gallery, the project combines the gallery’s catalogue of available-to-buy pieces with the design skills of luxury developer Genessia, headed by designer Shalini Misra and real estate investor Ekta Varma. 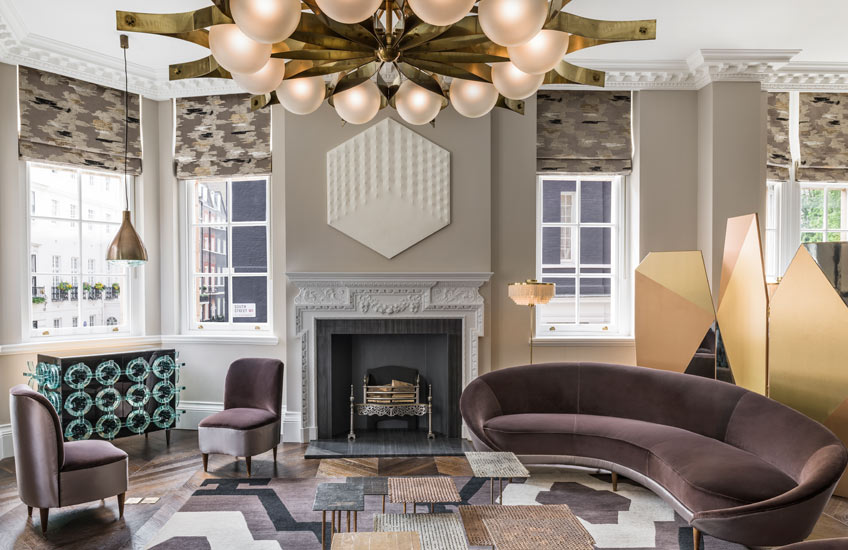 Found on South Audley Street in the heart of London’s Mayfair, the 230-square-metre Victorian lateral corner apartment with three metre high ceilings has been turned into “a high-concept decorative living space” with designs, old and new. Names include Gio Ponti, Viggo Boesen and Federico Munari Osanna from last century; Visconti di Modrone, Massimilano Locatelli and Lindsey Adelman from this resulting in an “always lived there” feeling.

“It was to be all-inclusive with the interior architecture, finishes, window dressing, furniture, lighting and art on display for the first time together in this space,” Shalini explains, “Essentially this was to create a new domestic landscape.” Anytime a designer aims to create anything new, the design world as we know it is in for a treat. 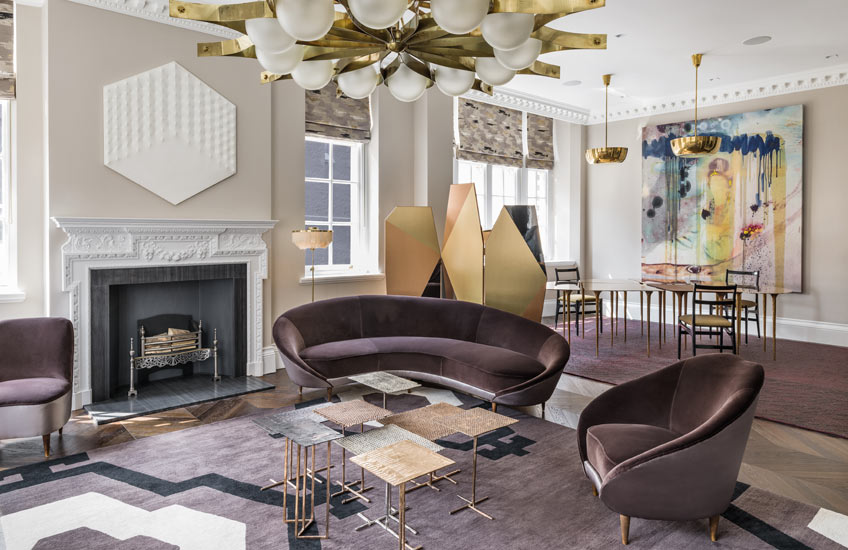 The hallway and living room/dining room act as extensions of each other and offer a somewhat open environment which guests are instantly drawn into. Monochrome Art Deco patterned flooring (inspired by Gio Ponti and mirrored in the custom cabinetry) leads through to apartment’s largest room via an oversized 2007 David LaChapelle photograph which rests against the wall. Bursting at just about every seam – ceiling, wall, floor and everything in between – the space is a tableau of Nilufar’s finest pieces with each telling a story. The mirrored bronze and mahogany dining table inspired by Tây lake in Hanoi; the green leather David/Nicolas armchair by neo-colonial Lebanese pieces. The room’s tapestry of world and historical design is vast.

“Nina [of Nilufar Gallery] visited the apartment and we walked around together getting inspiration for what should go where as we stood in the spaces,” the designer recalls of the design process which she describes as “really fun”, “We chose particular viewpoints that we wanted to add specific pieces to such as the David LaChapelle piece with its striking colours that really set off the bold monochrome geometric floor in the lobby.” 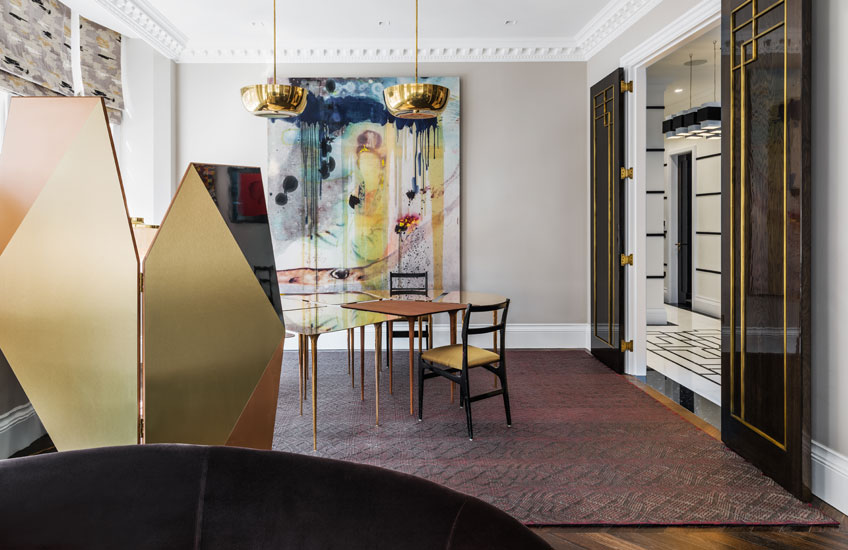 When contemplating the space as a whole (particularly considering the uniqueness of each element) there seems to be something wonderfully adaptive about it. It was never meant to feel like a gallery, Shalini explains, instead “serv[ing] to show exactly how a residential space can look with these pieces of furniture and artwork combined rather than the more static feel of a gallery where you often see pieces standing alone.” Nevertheless – and despite a traditional gallery space – the artistry of each piece is not lost on design minds. The room has an appealing configurable energy – each piece acting as a moveable part in the overall whole – and one can only imagine the variety of arrangements. 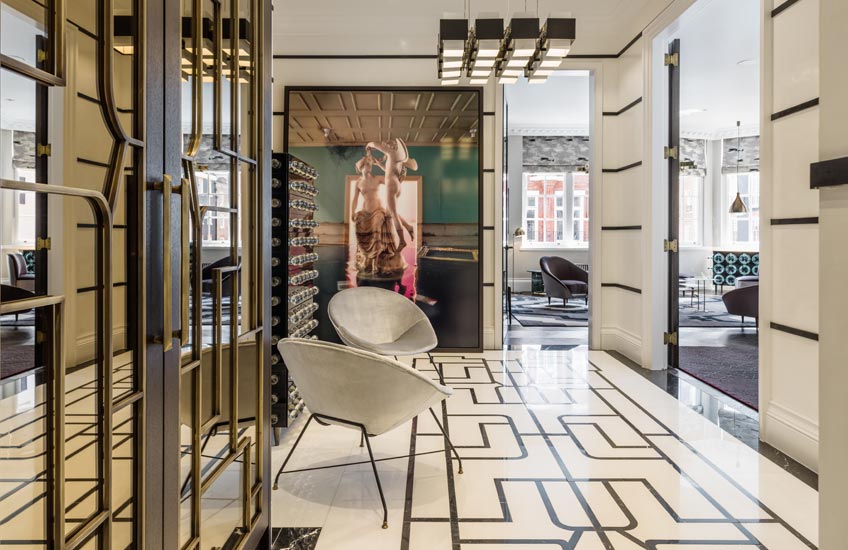 The need to stop and admire each piece individually and then its relationship to the room characterises the apartment in general but, in particular, the living room. That and diversity, of course, which proves to be important in a space which is kept classic by way of wall coverings, mouldings and architraves, all reinstated by Shalini and her team. It’s this diversity that the designer attributes to a successfully harmonious space.

“Interestingly enough, the cohesion is created from the diversity,” she says, “Every piece stands alone very powerfully yet they all sit very well together, playing off each other. The contrast of materials adds to the cohesion [and] this mix of textures and palettes really creates a fantastic blend. It really goes to show that you don’t need plain pieces to make special pieces stand out.” 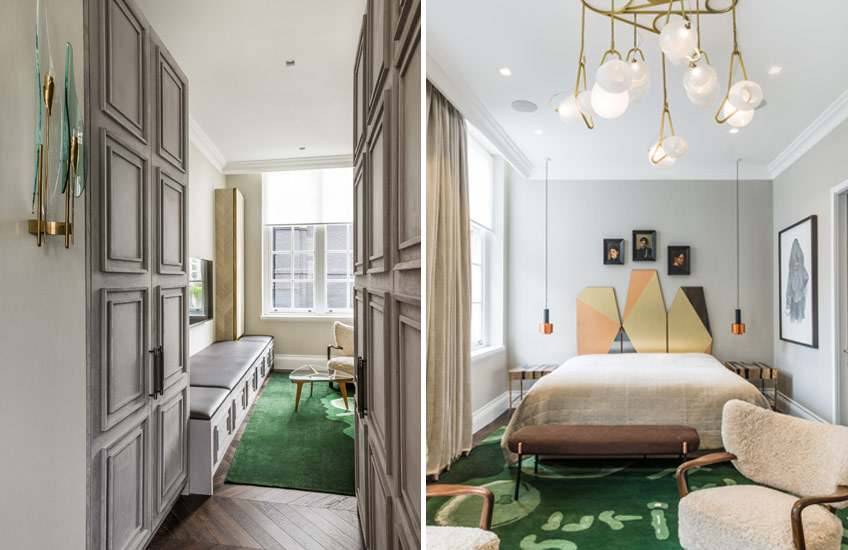 A woven palm rug, an arrangement of rattan and croc-effect cast bronze low tables (which together create the definition of the new coffee table) and 1950s Federico Munari velvet upholstery are just some of the interesting textures Shalini alludes to. Even the artwork – Julian Schnabel and Alighiero Boetti canvases and an Enrico Castellani art piece – capitalise on texture.

The bedrooms (there are three, or four if a study isn’t required) are, expectedly, very distinct. The master – an otherwise serene space of dove grey linen wallpaper, faux suede cabinetry and soft eggshell linen curtains – is pepped up by a full-size verdant Caturegli Formica rug, geometric Martino Gamper screen headboard and wool Viggo Boesen chairs. Its bathroom is a masterpiece of calacatta marble and dark grey stone with its two illuminated bronze-framed mirrors and bath mirror reflecting its beautiful veining in all directions. 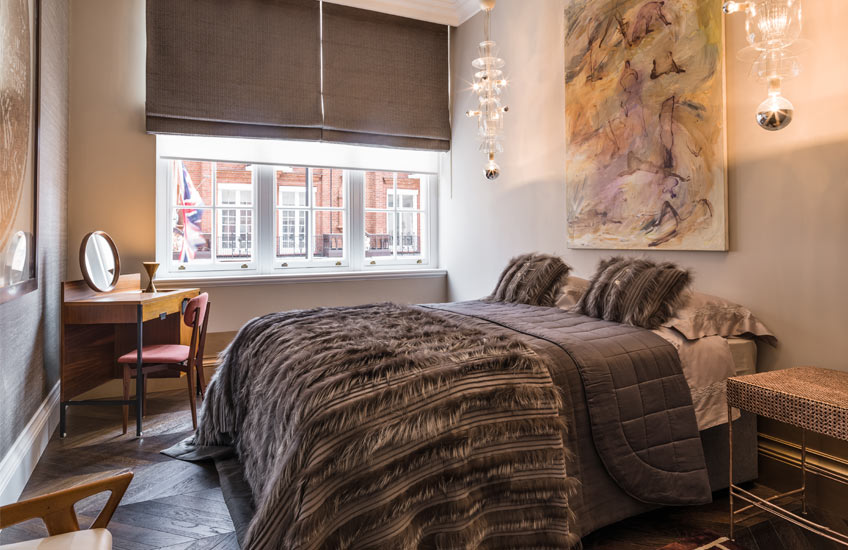 Past a whimsical Lindsey Adelman fringed wall light installation, another bedroom incorporates playful elements (the painted gold skirting board was a particular stroke of simple genius). Glass totem-inspired pendant lights by Bethan Laura Wood hang over metallic rattan bedside tables whilst an impossibly tactile fur bedspread on the luxurious bed and a vanity table by Ico Parisi adds a retro vibe – the notion of cutting edge (both old and new) not being lost on the design minded.

Even the utilitarian spaces – the kitchen and bathrooms – are something to be admired. The kitchen and informal dining area is completely state-of-the-art (Gaggenau and Miele appliances throughout) without compromising on aesthetics. The glistening copper of a domed Patricia Urquiola pendant and the lower cabinets’ brushed brass enhances the striped wood and chevron-patterned door fronts. 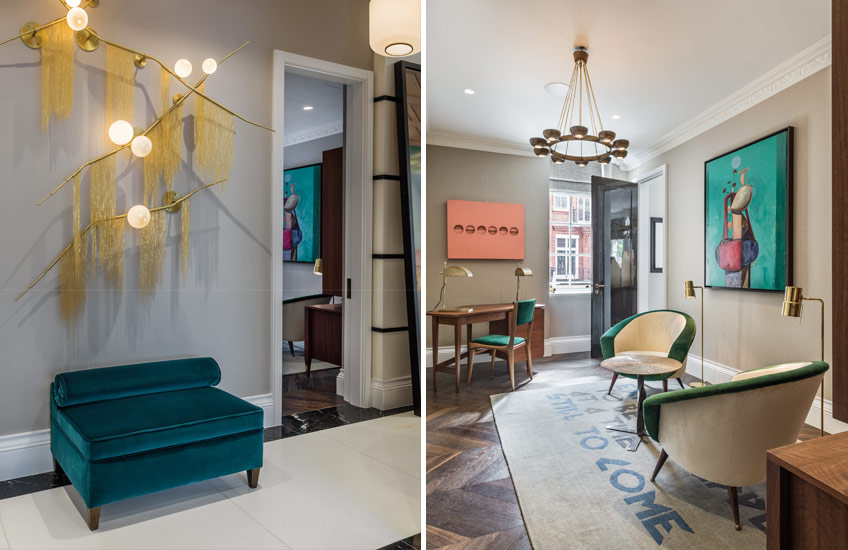 So, which of all the rooms is Shalini most proud of? “Goodness, how can I possibly choose?” she bemoans, “I think, if pressed, it would have to be the reception room as you can see the study and entrance from it so it encompasses a lot of the apartment. Is that cheating?!” With such a difficult prospect, could anyone refuse her that? 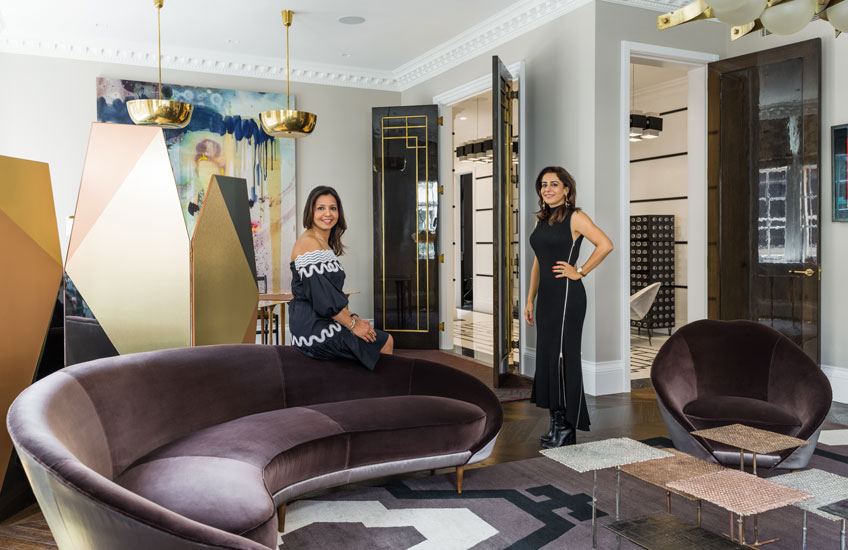 The success of Squat bodes well for the designer and her new development company. Setting itself the task of “redefin[ing] London’s luxury property market”, Shalini boasts, “We have gone over and above the super luxury specifications that you would expect in a high-end apartment.” This first project certainly sets them off on a good footing and the success is speaking for itself.

“The response has been tremendous,” Shalini enthuses, “The one thing that really delights me is how people have said that this whole project is a unique concept. In a world of fantastic and talented designers, this is great to hear.”

A Conversation with Karen Howes on 'Think Big, Shop Small'

Supporting the industry's creativity, together

Behind The Brand: Heathfield & Co.

Designer lighting with a serious track record for beauty

Supporting independent crafts is something for everyone’s to-do list