Set amidst the hills and dales of Perthshire, Forter Castle – London-based interior designer Katharine Pooley’s Scottish home – stands majestically against the greenest of backdrops. At first sight, it’s everything you would expect of a highland family home (if your family are of noble Scottish stock, that is) – a stone-made, turreted fortalice which acts as a reminder of the area’s defensive past and tangible evidence of the fighting spirit of the land.

Step inside and you can breathe a sigh of relief at what you will find. Striking a shrewd balance between loyal restoration and stylish, industry-acclaimed design flair, the interior suits its surroundings and background like a glove. But what else would you expect from a woman who’s made glamorous modern classic something of an interior design movement? Speaking of her favourite project, Katharine reveals, “I aimed to capture the enduring history of the castle by carefully restoring each room to its original period.” Fusing a traditional country manor aesthetic with the highest quality of contemporary comforts, the castle’s interior is admirably welcoming despite its stately proportions – a true Katharine Pooley characteristic and one achieved by including “personal touches [which] are the key to creating an inviting home”. 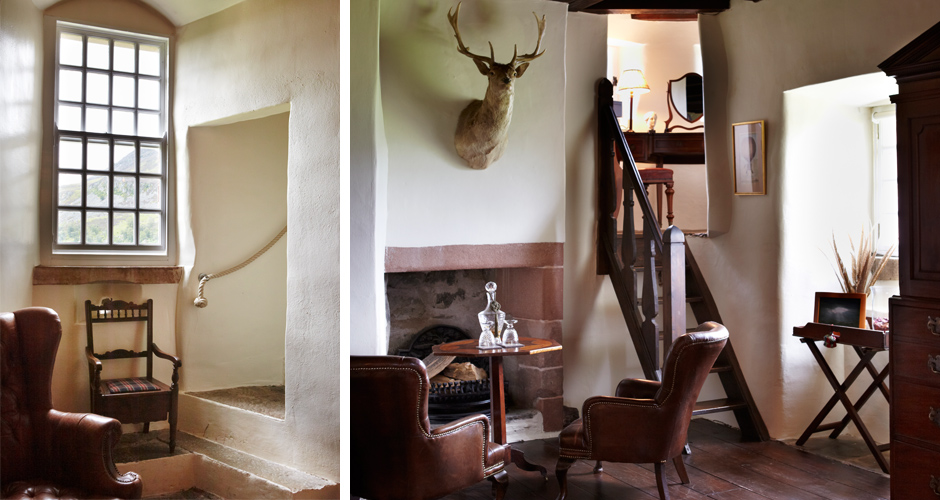 The impressive banqueting room, decked out in the family tartan, is full of heritage touches, including traditional tableware and cast iron chandeliers, which are expertly balanced with modern table lamps, vibrant velvet-upholstered statement wingbacks and perfectly precise tailoring, resulting in the “fresh and modern take on Scottish style” the designer was aiming for. The wow-factor of the room – a richly painted illustration referencing the folk song The Bonnie House of Airlie which is considered by some as an immortalisation of the castle’s downfall in 1640 – adorns the wooden ceiling giving it that authentic stepped-back-in-time feel.

A short walk (and a few winding staircases) later and you find yourself in the house’s living quarters. Equipped for housing wedding guests when the family aren’t there, the bedrooms are all uniquely decorated in the way that any boutique hotel would be. Some are accented with button-tufted Chesterfield-inspired beds as their focal point, others wooden four posters. All, however, include locale-appropriate textiles (think wool, leather and cashmere), fabulous antiques and a careful use of space which gives them that just-right atmosphere. The Laird is by far the most elaborate of these bedrooms. A canopy bed so grand you actually have to climb steps to get into, storage trunks as side tables and a palette of regal purple and rich brown make it a perfect bower for the lord and lady of the manor. 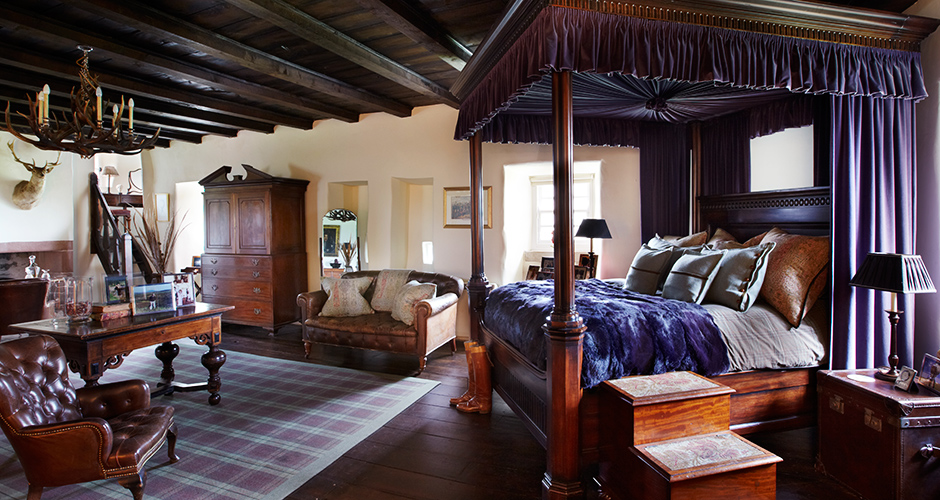 Having been lovingly restored to its former glory by the Pooley family, the home shows no signs of its neglected past. The story goes that the designer’s father purchased the castle back in 1988 but the structure’s history predates that transaction by 428 years. “[Forter Castle] was equipped with the best defenses known at the time,” the designer informs us.

By the time the castle came into the Pooley family it was in a shocking state of disrepair. Described as a “labour of love”, Katharine says, “I felt it was important to use traditional techniques to maintain the integrity of the building,” and even went to the lengths of cutting beds in half in order to get them up the tight, spiral staircases. 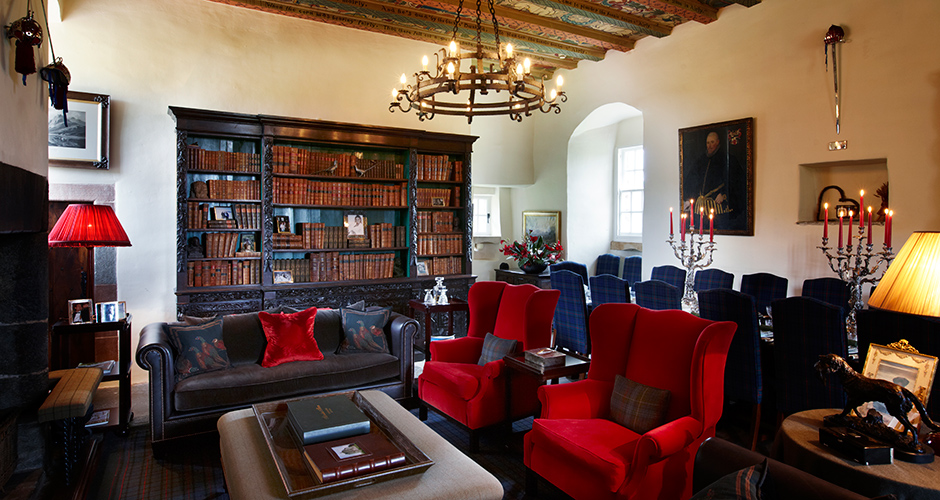 Once the structural work was completed, the designer started to work her creative magic in making it the home it is now. “I was mindful of respecting the grandeur of the castle,” Katharine explains, “whilst building up layers of rich colours using tartan rugs, cushions and throws to ensure an inviting, cosy feel.” Claiming her favourite spot to be found in is by the Great Hall’s large log fire with her family and dogs, Katharine is privileged to be the owner of a home so inviting and warm that it can make one completely forget the world – “I love to be able take time in the remote setting of Forter with no access to the internet – we spend time cooking, playing games, reading and enjoying the simple things in life.” Sounds just like our kind of getaway.

Clearly a project unrivaled by any other – Katharine has been the mastermind behind many a chic space around the world including London’s The Lancasters and Heathrow Terminal 5’s VIP suites – the designer claims, “Forter will always stand out and remain incredibly special to me as I had free reign to do exactly as I envisioned.” Luckily Katharine’s vision is fabulously faultless.

How to Get The Highland Interior Style

Of the country manor style, Katharine says, “[It] is quintessentially British and the beauty of its original features and heritage makes it eternally stylish. Undoubtedly, as period drama has returned to popular culture, with the success of Downton Abbey and The Paradise, there has been a revival of country manor style and the rejection of modern, high-gloss aesthetic.

A tricky look to get right, Katharine gives us her top tips on how to channel the perfected country manor look with more style than stuffiness:

1. “Of course, tartan is an integral part of the soft furnishing design [of a house] and can be complimented with a rich palette of crimson and navy and warm textures such as velvet, leather and wool to soften [its] strong design.”

2. “I like to mix up traditional design with contemporary lines and finishes. The wonderful architecture of the castle speaks for itself but I was careful to punctuate the interiors with strong colour and personality to keep things fresh. I wanted to use traditional pieces for key statement furniture like the four-poster beds and free-standing bath but added a contemporary feel with beautiful fabrics and textures to update the castle in subtle and tasteful manner.”

3. “Lighting is also an integral part of a scheme and should be planned from the start in order to ensure a coherent feel. Within the castle I used layers of lighting from grand chandeliers in the Great Hall to practical yet beautiful table lamps with a number of stunning candelabras to create a beautiful ambience in the evenings.”

The season's offerings are sure to make the prettiest table touches

What's On My Mood Board: Janine Stone

Here are the designs to inspire your next hallway table purchase