Only the chance of a once-in-a-lifetime tea ceremony provided by one of the world’s 10 Gongfu Tea Masters (and its only female Master), Madame Tseng, and a peek at the highly anticipated Lotusier tea humidor – the first of its kind by way of calibre, functionality and craftsmanship – would unite London’s journalist and press set on a cold February morning. Against the backdrop of 5 Hertford Street’s Rifat Özbek-designed interiors (which are quite something with their fringed furnishings, wallpapered ceilings and personalised A-list notes decanted from the private club’s sister location Annabel’s), luxury brand Lotusier’s game-changing creation launched, revolutionising tea as we know it entirely.

Designed by interior designer and ex-Head of Marketing & Communications for COS Åsa Eriksson-Ahuja, the humidor is a labour of love in the truest sense. The concept originated as a stroke of genius of Åsa’s who was looking for a special gift for her then-boyfriend, now husband, Nandi (who supports his wife with his animated and informative discussions on all things tea-related). The idea was born, the piece was commissioned and four years later is thrilling tea lovers to the nth degree.

According to Madame Tseng who has given the new design her coveted stamp of approval, the resulting piece “[elevates] the preservation and presentation of tea” and “liberates [it] from pantries and kitchens – allowing it to ascend to the privileged places we reserve in our lives, the spaces where we live, work and entertain”. And ascend it does.

Completely handcrafted by European artisans, the design features more than 20 carefully considered individual components which combine to protect tea from four of its five “enemies”: humidity, light, air and odours. (The last, heat, can be controlled, relatively, by the temperature of the room it is in.) This scientific approach to the humidor’s make up is the result of the brand’s four years of research and development.

Inside is found German precision instruments, airtight containers and Swiss and Italian-made stainless steel serving accessories, including sand timers, a strainer and spoon. And that’s just the mechanisms of the piece, to say nothing of its aesthetics which currently has two international patents pending.

Choose from one of five equally remarkable and individual designs, each inspired by the world’s most prominent tea drinking cultures: China (Cha Jing Collection), Japan (Saicho Collection), the Indian Subcontinent (Indus Collection), the Middle East (Andalus Collection) and the Euro-American Occident (Déco Collection). Monochrome Art Deco geometry, striking emerald radial patterns and intricate arabesque motifs feature, offering styles as diverse as the cultures they represent. The marriage of exquisite lacquered wood marquetry, hand-crafted crystal containers and high-shine stainless steel hardware is a testament to the brand’s commitment to quality and style (not surprising considering its elegant designer). Interior individual plaques can be inscribed with a personal epithet or the names of the corresponding tea.

As much as the object itself is a labour of love, so too is the founders’ philanthropic contribution and their interest in environmental and social concerns. In a market where luxury and ethics are often opposing ideologies, Lotusier leads the way with all materials being responsibly sourced and 10% of sales donated to charitable causes relating to global tea plantation workers. 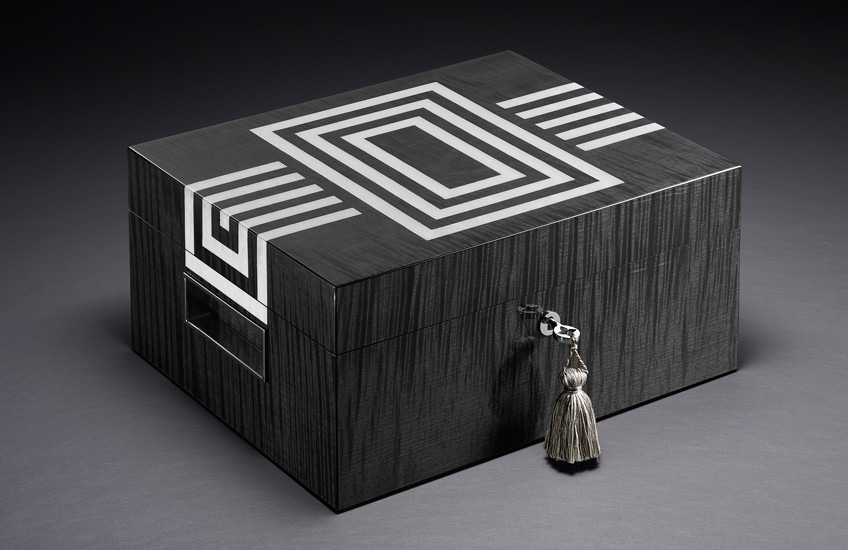