The Four Seasons London at Ten Trinity Square has welcomed Mei Ume – the long-awaited Asian restaurant which joins the hotel’s existing French restaurant, La Dame de Pic London. Opened on the 9th June 2017, the restaurant is an exciting and historical addition to the capital’s already vibrant culinary scene and an undoubtable hot spot in the City of London. Referencing the former Port of London Authority building’s international trading history, the restaurant expertly fuses East with West both in its design and cuisine for an immersive and luxurious dining experience.

Surely because of their experience working on the world’s most luxurious hotels including the Mandarin Oriental, Hong Kong-based designers Eg Ng and Terence Ngan of AB Concept were recruited by the illustrious hotel group for the project – the first in the UK for the design studio. The task? To transform the impressive space into a setting fitting of its prestigious history and stellar menu. “The interiors of Mei Ume work harmoniously with the stunning architectural features of Ten Trinity Square,” the hotel observes. 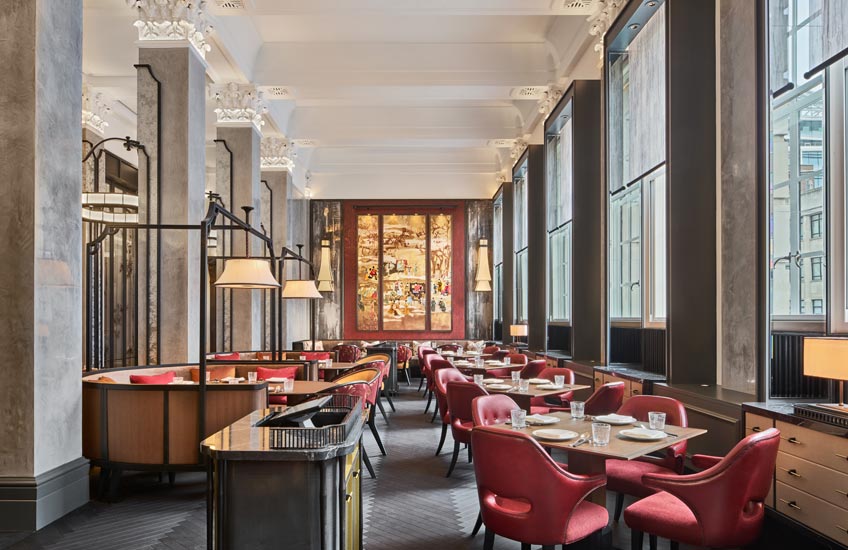 In an exclusive interview with LuxDeco, Ed Ng reveals, “You don’t want to recreate something that is already a hundred years old. Then it becomes a theme park, it’s a cliche. You want something contemporary but that also gives people the illusion of ‘Has it always belonged to here? But why does it look so contemporary?’ I think that is actually the challenge – that’s what makes the whole project interesting. Also, in dining now, it’s all about this ‘Instagram moment’. If you can design an Instagram moment, that’s actually worth more than advertising.” 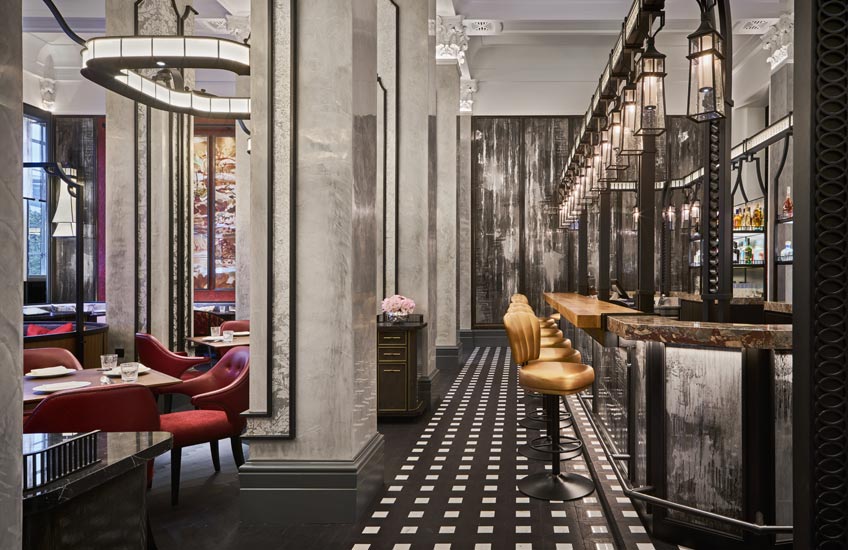 Upon entering, guests are treated to one of these Instagram moments – an enamelled glass panel suspended in a lattice framework between two of the space’s many ornate pillars. Perfectly fusing the new addition to its existing setting, the screen’s Chinese and Japanese plum flower design adds a delicacy and softness to the space’s grand proportions and handsome architectural features. 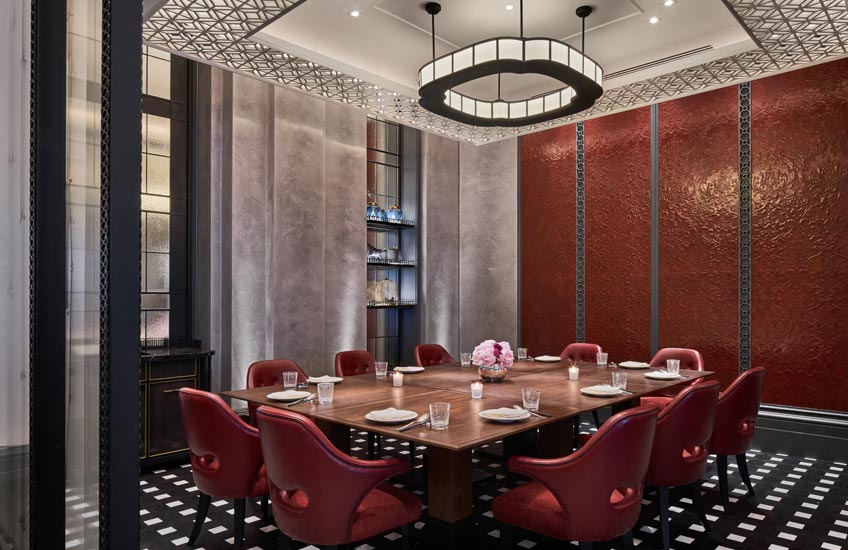 The restaurant’s main 48-cover dining room too features exquisite art installations – this time a triptych of three-layer gilded artworks which depict a Chinese banquet scene at either end. Its traditional sensibility is married with a palette of bold reds – a symbol of happiness, prosperity and luck in Asian cultures – and pinks. Separated by a silk lace panel, a private dining area for 12 to 14 guests is also available for more intimate gatherings. 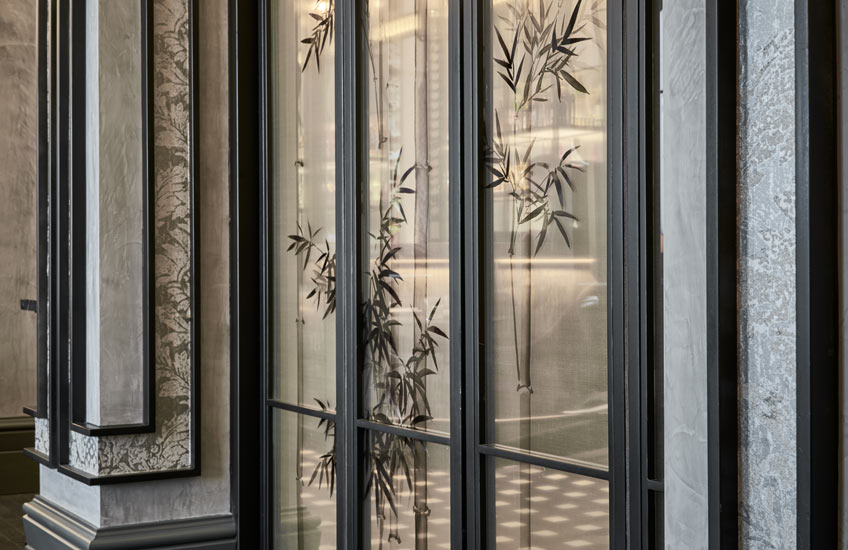 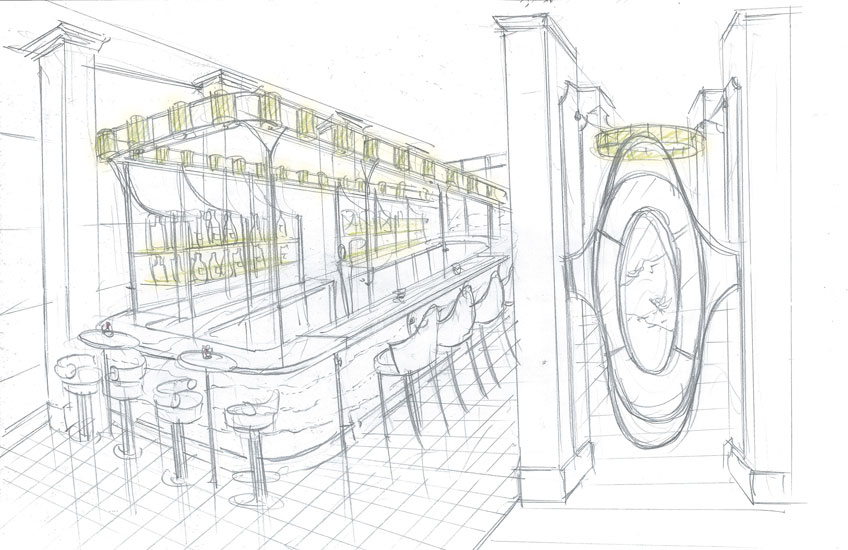 Mei Ume’s menu items include crispy baby squid with salted eggs, selections of dim sum, stir-fried Dover sole with cloud ear mushroom and celery, and braised pork belly with crab. Traditional Peking duck – which will be served with pancakes, leeks and cucumber – has been revealed as one of the restaurant’s signature dishes. For lighter dining or cocktail hour, a live sushi bar which prioritises quality will serve up “simple” dishes which “[strike] a delicate balance between each flavour” whilst the restaurant’s pavilion-style, 10-seat bar and lounge area will serve cocktails inspired by Japanese astronomy.