It’s only in its first few weeks of life and already Kensington Pavilion has proven itself a huge success. The sophisticated restaurant might be the gastronomic branch of an elite business members’ club of the same name but it has also endeared itself to the dining masses. Just passing by during one of its early Friday evening seatings revealed it as a welcome addition to the Kensington’s swanky high street with both young business types and elegant diners flocking to its doors.

And you can expect even more when you enter. Run by Michelin-starred head chef Adam Simmonds, the food – beautifully arranged plates of seasonal, British fare is reason enough to visit. The extras – it has an on-site florist and deli stocked with meats from Borough Market regular Cannon & Cannon, over 50 varieties of cheeses and freshly baked breads and pastries – is a second reason. But our favourite is its modern take on the eternally stylish Art Deco aesthetic – a fitting choice for a restaurant which is just a hop, skip and a jump from the Barkers of Kensington building, one of the city’s most iconic examples of the much-loved style. 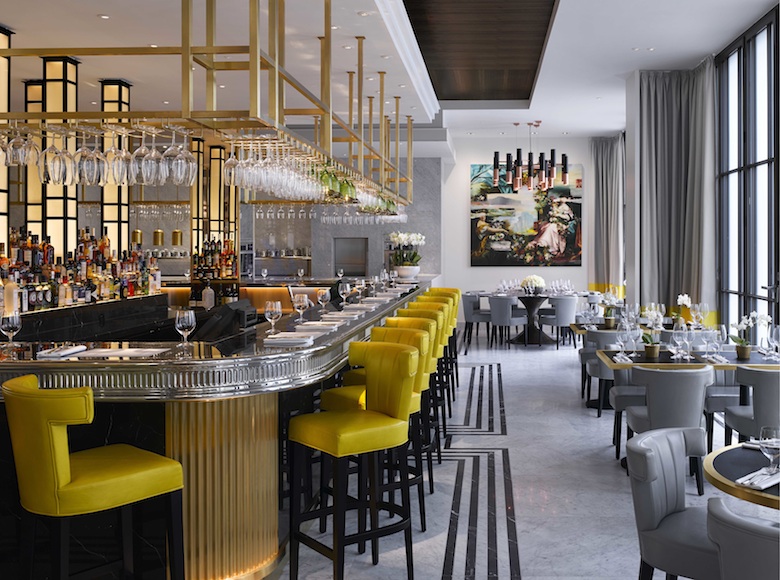 We caught up with Lucy Robinson of the interior design firm in charge, designLSM, to talk influences, multi-purposing and getting the atmosphere right.

Q: What was your brief for the space?

A: Our brief was to design an attractive and high end multi-use space that combines areas of retail with a bar and restaurant for use by both the business club members as well as the affluent Kensington resident. We were asked to create a contemporary yet classic environment with all of the interior elements impressively super-sized.

A: Yes. When beginning the design process we were initially drawn to the Art Deco era as it represents luxury, glamour and exuberance. We kept these ideals in mind when planning the layout which is symmetrical within the space. The materials used in the design – black and white marbles, brushed and oiled brass, polished pewter and rich walnut – were chosen for their quality and used in a contemporary manner to bring the interior up to the present day – for example, the geometric black tram-lines that are laid into the marble floor and run around the bar. I love the Art Deco period so it was a dream to work on this project.

Q: How much of an influence did the cuisine have on the design?

A: [Head chef] Adam Simmonds became involved in the project in the latter part of 2013. At this point we had our concept for the design language set but certain areas of the layout were still fluid. This is when the menu influenced the planning. We included a large meat aging fridge to house the steaks that are on offer, as well as a bakery area to sell all of the breads and pastries baked in house. Adam’s style of cuisine didn’t directly influence the design of the restaurant, however, it definitely compliments the environment. 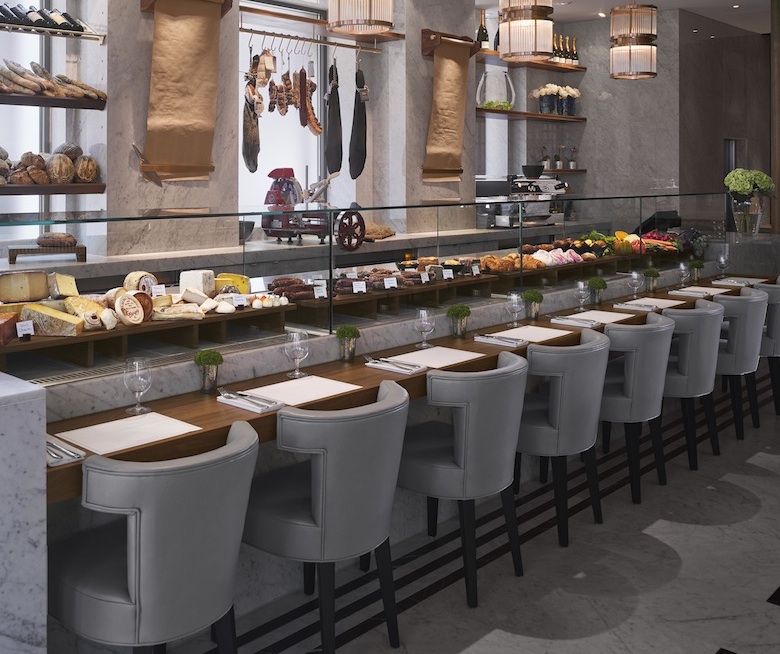 Q: The restaurant serves breakfast, lunch and dinner. How did you go about creating a space that suited all three dining experiences?

A: The restaurant is very flexible in its use with each area changing throughout the day, for example, the deli – this is a retail outlet selling produce during the day but, as late afternoon/evening arrives, a walnut shelf along the front edge of the counter becomes dining space for customers. The bar is used for eating during the day but in the evenings becomes a place surrounded by people trying cocktails.

The lighting levels we created also help this transition. As mid-afternoon arrives, the lights slowly go down creating a warmer atmosphere. This happens again at early evening and then again for dinner. Each time, the general lighting is reduced and the feature pendants and glass pillars on the back bar become the main source of lower level illumination. By doing this we help shift the mood from a light breakfast and lunch to a more exclusive dining experience.

Q: The space is quite open planned with very little to separate each area. What was the reasoning behind this and how does it affect the atmosphere of the space?

A: All along the shop front are a series of full height bi-folding doors which are the eyes into the building. It was key for the design on the inside to be on full view to the passers-by so it made sense to keep the area open and use the key elements inside to zone the venue. This was done by creating the large island bar that fills the centre of the space. On each side of the bar you will find something new – the deli on the left, an open kitchen on the right, window dining at the front and to the rear – a meat fridge, wine display and banquette seating. In each area, you are seeing something different which means the space doesn’t feel like a large expanse and intimacy is retained.

Tunes to wrap up in a warm blanket to

Podcast Ep 7: The Master of Fantasy with Martin Brudnizki

Is Martin Brudnizki the man who killed minimalism? LuxDeco explores.

Podcast Ep 6: The Case For Emotional Design with Fran Hickman