Jeff Leatham certainly lives and breathes his moniker of “rock and roll florist”. He counts Oprah Winfrey, the Kardashians, Sofia Vergara and Eva Longoria as clients (and friends for that matter) as well as His Holiness the Dalai Lama and the Clintons; he’s been the artistic director of the Four Seasons Hotel George V in Paris for 17 years; and, as if that wasn’t enough, he’s a sir!

As LuxDeco’s ever-inspiring floral Tastemaker and the A—list's favourite flowerbomber, Jeff took time out of his busy schedule to talk to us about his journey into the industry, his iconic style and how he feels about Paris after 17 years.

How did you first get into the floral industry?

When I left university, I worked a lot in retail management—I worked a lot for the Gap. That’s actually how I got to Los Angeles. I moved there from Utah to open stores for them. Then I started modelling for a couple of years so I moved to Europe for the summers. When I came back to Los Angeles I was looking for work and that’s when I reached out to a friend who I knew worked in design and he came back to me and said that he had a friend that worked for the Four Seasons hotel in Beverly Hills on Doheny Drive that had a big wedding that weekend and they were looking for extra hands. I went in there just to see what it was about and walked into that hotel and was really blown away with what they were creating with the florals there. Really, it was the first time I looked at flowers as an art form, so to speak. So I started with a woman named Paige who ran the shop there and one thing led to another. I worked for her for four years at the Four Seasons there and then I started up my own business where I helped open the Mondrian hotel the Philipe Starck hotel. Then when they reopened the George V in 1999, they came to our hotel in Los Angeles to look at the flowers because we had such a great reputation for our floral designs. I asked them if I could go to Paris and help them open this beautiful new hotel and they sent an email back saying, “No, we’ve already hired a French designer.” Basically, “Why would we hire an American to do something the French do so well?” I was very disappointed about it but I knew they were coming back to do press for the hotel. And there’s one thing with flowers—they’re so beautiful in person but you don’t really get that same effect with photographs so I made sure everything was beautiful when they came back.

When they saw the flowers in the person they said, “We’re so sorry we said no. Come and help us move to Paris.” I was only supposed to go for two months and it’s then ended up 16 and a half years later and I’m still there.

Do you remember that first display that you created for the reps of the George V? Do you feel like your style has changed since then?

Oh, for sure! I have photos of my old style. At the time, at the Four Seasons in Beverly Hills, I was working for someone else so I kind of followed her way which was very clean and romantic—kind of English garden with a little bit of my touch. And now my designs are very bold colours and architectural. It’s a totally different vibe now.

How did the move to Paris influence your career?

Moving to Paris was really the time that I was able to experiment with flowers. When the George V reopened, we had an amazing owner and amazing financial backing and if it didn’t work I would throw it away and start over and that’s where we came up with a lot of my signature designs that are replicated around the world. My team and I were able to create something very special that revolutionised the way people think of flowers in public spaces. But definitely, the style really evolved in Paris. It was small in the beginning. If you look at the George V the first couple of years and the George V now, all the big tables and antiques are pulled out and there are big vases of flowers now. The flowers really took on a personality of their own in that hotel, and that’s really what made my career. I really owe my design career to the Four Seasons. We’ve had a very long relationship for over 20 years and we trust each other very much and that’s why I’m still loyal to them. It doesn’t matter what other projects I have going on in the world, I always work with them. It’s been a great relationship.

You’re based in both LA and Paris. How do the two cities inspire your work?

The great thing about Paris if you’re a designer is no matter what you’re designing—home, or clothing or flowers—there’s a certain luxury stigma that comes with that, in a good way. You’re like, “Ooh! Did you see his work in Paris?” So I think I have to prove myself less in Paris because it’s Paris. Your designs are automatically iconic, in a way, because they come from there.

In Los Angeles you tend to have to work a little bit harder for that which is fine. It’s been great for me because the reputation that we’ve built in Paris over the last 16 years, rolls over to Los Angeles.

What else are you inspired by? You describe your works as architectural—is that a main reference point for you?

For sure. I’m a huge art collector. It’s very important to me. My whole styling and favourite period is that whole Mid-century Modern era. The 60s and 70s are so inspiring to me because those designs are so timeless and bold. I think that’s what I want people to think of my work as timeless, bold statements of colour and texture so I tend to fall toward that. And when I work there’s definitely a certain style that’s around the world—you know, my flowers leaning out the side of the vase, for example. There’s definitely a styling that goes with a Jeff Leatham look. I’m lucky as a young designer to have a design that is characteristic to me and my personality, especially in floral design. In fashion you can look at Valentino and say “That’s a Valentino red dress” or “That’s a white women’s tuxedo from Yves Saint Laurent” and the fact that you can look at a style of flowers and say, “That’s Jeff Leatham”, I’m lucky. And you’ve worked with some amazing people over the years, including your celebrity clients. Did those start fairly early for you?

When I was in LA, I didn’t really have a lot of celebrity clients because I was working for someone else. But when I moved to Paris and the George V reopened, it was such a glamorous, destination spot and, being the Four Seasons, so many celebrities stay there because they know, first of all, it’s discreet, second of all, luxury and they make you feel like you’re at home. So it was there, when celebrities would walk in to the George V, they’d be so taken aback.

How would your describe your at-home style?

My home is Los Angeles is very Californian in the way in that, wherever you look, you see gardens and green. That’s why it was important that most of my furniture was neutral with whites and hits of blue. But my house in Paris is like a museum, in a way, where I wanted to create a chic, sexy cocoon. Everything’s black, a lot of it was inspired by Tom Ford, the way that he designs. So when I moved in there in 2004 I really wanted to create something special.

And you’re clearly an art enthusiast.

I think that’s the great thing about a space and that’s when you really see someone’s personality. A couple of weeks ago we were with friends and we were going through this beautiful mansion in Bel Air which was huge (it took 45 minutes just to do a tour), but there was zero personality. What I bring to a house is about my passion for art, photography, books and pops of colour and chic, eclectic pieces so when you walk into either my house in Paris or my house in LA, you know the vibes are different. My personality is definitely there because it’s my mix of art, furniture that I like, pieces I’ve designed, obviously the flowers I put in the house so there’s definitely a personal vibe there.

You’ve said before that you love flowers and you love design but it’s the combination of the two that really makes your work special. How do you combine those successfully? 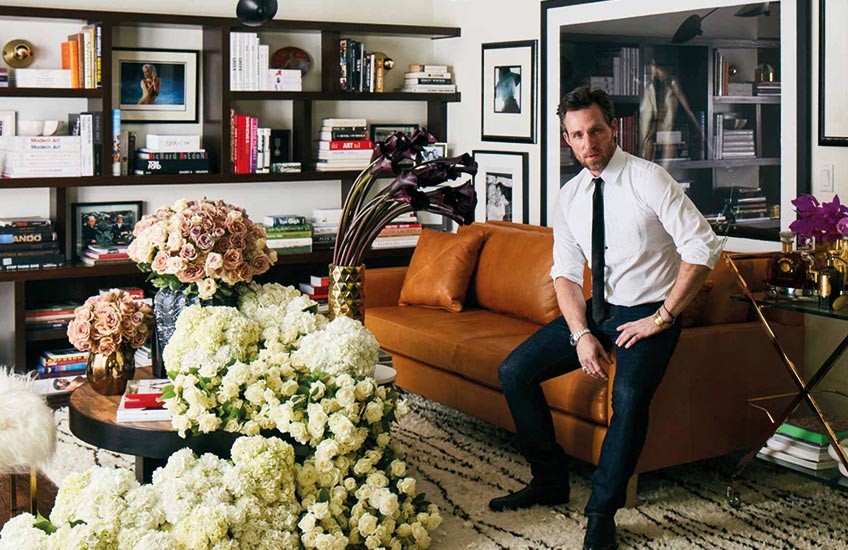 How does the creative process of your flowers differ from that of your product collections?

I’m obviously proud of my work with flowers but I’ve been doing that for 20 years so I’m very proud of my other work. My crystal designs, rugs designs, making my books, the candle collection... Because those are different memories you create. I love working with fragrance because when you smell a certain candle it reminds you of a certain time in your life, just like a flower does. Or you’ll have a vase—the vases I have with Waterford crystal—that are made so well that they’ll be passed on. Everything I do, I always want to have a sensory affiliation with flowers because I think when you hit people’s senses and you’re making products that they need, that’s important.

And they do say that scent is the strongest memory recaller.

For sure. I was walking down the street the other day with my boyfriend and I got this whiff of lilac which brought me right back to when I was a kid with my grandmother. It took me right back to five years old so that’s a strong power. So if you can replicate that in a smell or a design and you’re tapping into someone’s senses and emotions then you know you’ve done a great job as a designer.

You’ve revolutionised the floral industry, changing floristry to floral design. What would you like your legacy to be?

It would just be exactly what it is. The other day I said to my partner that, honestly, if something happened, I would die a happy man. I’ve had such a huge, fulfilling career, including last year when I was knighted by the French government. Just when I think it can’t get any better than this, something else happens. I see my career as a journey to keep my senses opened, stay inspired, keep inspiring other people and try not to stress too much about the details.