Though you might feel strange doing so, if you search for Sexy Fish on Twitter, sentiments such as “the one we’ve all been waiting for”, “best for big nights out” or “I’ve found my favourite plaice” (uttered by the formidable and typically hard-to-please restaurant critic Grace Dent are the kind of thing you’ll find. The newest addition to the Caprice Holding family has been a long-awaited advent and the result, in all respects, hasn’t failed to disappoint. Not in the least starting with its celebrity-studded launch party, attended by Rita Ora – the restaurant’s ambassador – Kate Moss and Goldie Hawn. 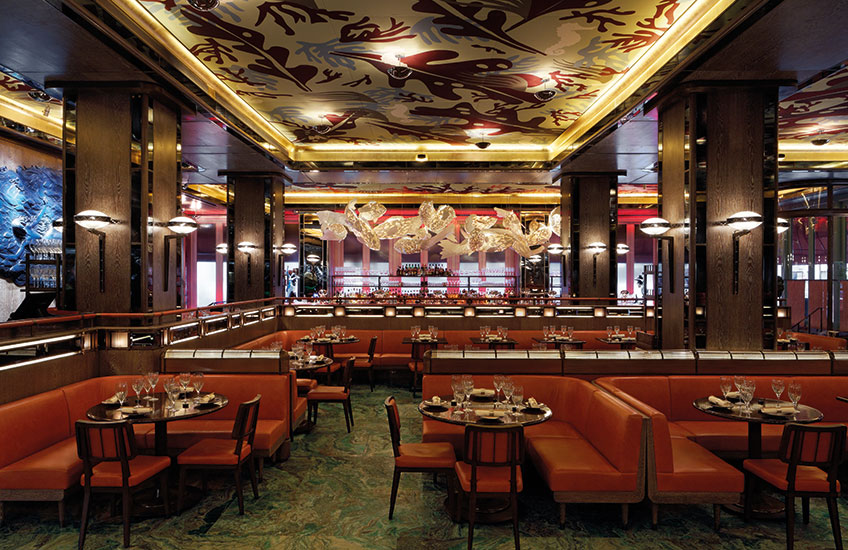 The seafood and sushi menu is incredible (the kitchen is headed by upwardly mobile Executive Chef Ben Orpwood) as are the desserts; the wait staff are more than hospitable and the cocktails are playfully creative (fun little Asian proverbs come tied to glass stems to ensure you leave both satisfied and inspired). It would seem Sexy Fish is overflowing with good points. But for the design minded, the interior design is the real talking point. 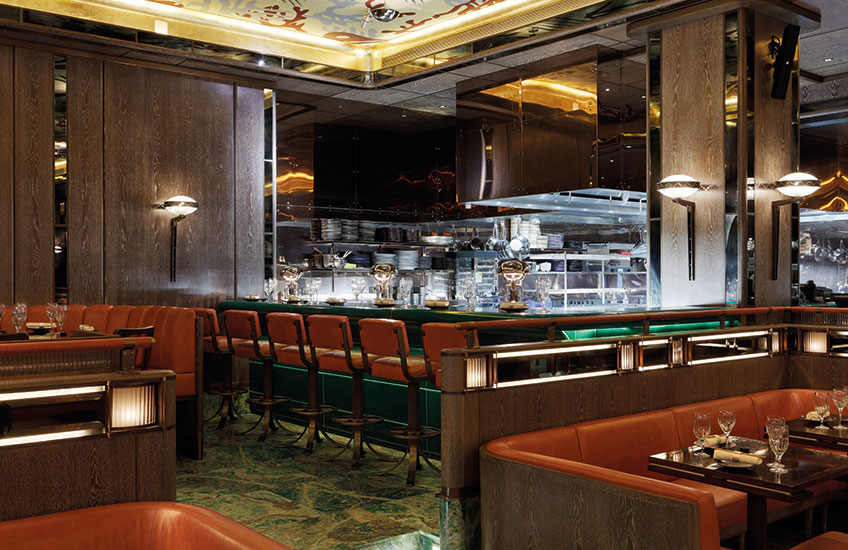 Designed by Martin Brudnizki Design Studio – the London-based interior team responsible for many of Caprice Holdings’ hotspots including The Ivys (not to mention the original’s 2015 redesign) and the Le Caprice refresh, the commission wasn’t exactly a surprise. After all, why change a good thing? But that’s probably the only expected element of this new venue which delights at every turn. Impressively, nothing about it is confined by conventions. It has something to say and isn’t afraid to say it. Even the doormen were markedly jaunty, decked out in grey turtle necks, brown double-breasted coats and berets – a playful touch to the prestigious London square. 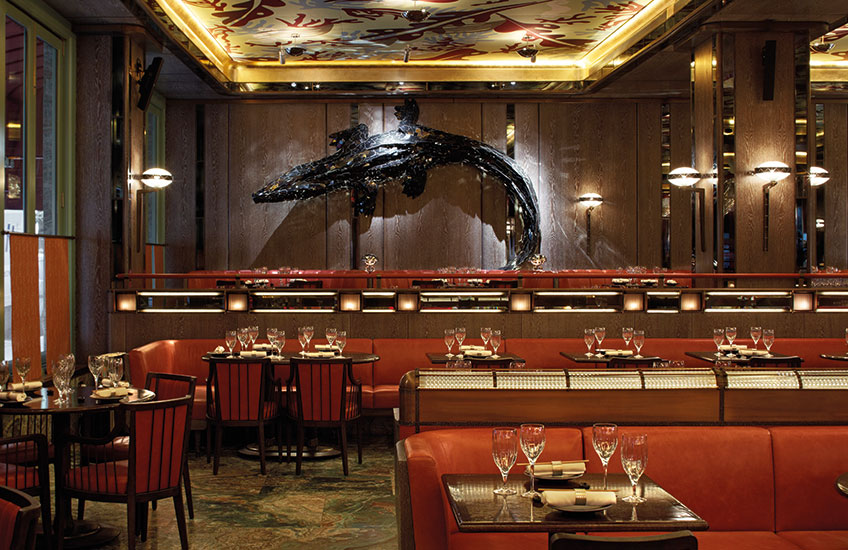 The aesthetic is a heady and surprising blend of theatre and mid-century. There’s a luxurious Grand Budapestesque vibe to the place with its raspberry leather banquette seating (which links the restaurant to other MBDS/Caprice collaborations), dark stained timber clad pillars and that enchanting esmeralda onyx flooring which makes you want to linger just a little longer before being ushered to your table. But when eyes are finally drawn from floor to ceiling, attention is taken by a beautifully uplit statement coral reef mural by Michael Roberts – fashion and style director of Vanity Fair and an accomplished illustrator. It can’t be said about this establishment that big names haven’t left their mark. Indeed, with a stellar opening season, it’s clear that this has, and always will be, a gathering place for the elite. 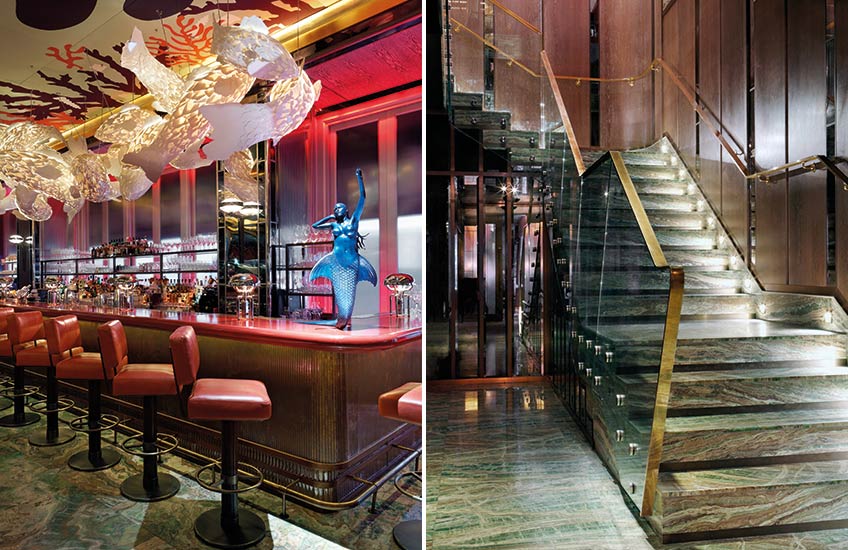 At the bar, a lively scene unfolds. The salmon pink, lava stone topped design – somewhat of an American diner look – is home to 20 Frank Gehry koi fish lamps which swim their bioluminescent bodies overhead. Two Damien Hirst blue patinated, cast bronze mermaids bookend the display. On the far wall, a glistening wall-mounted Gehry crocodile – tiled in shattered formica – is the final instalment in this unanticipated gallery of remarkable works. No one could accuse MBDS of not knowing how to make a splash.

A rather surreal underwater adventure, there’s certainly a lot to take in for an expansive 190-cover space, particularly as it’s designed to be experienced as a whole. To keep disruptions of the adventure to a minimum, the space is cleverly and naturally divided into intimate areas by curved banquettes and low-level dividing walls which are trimmed with faceted Streamline Moderne lighting and bevelled mirrors and topped with a handrail of embossed leather and patinated brass. 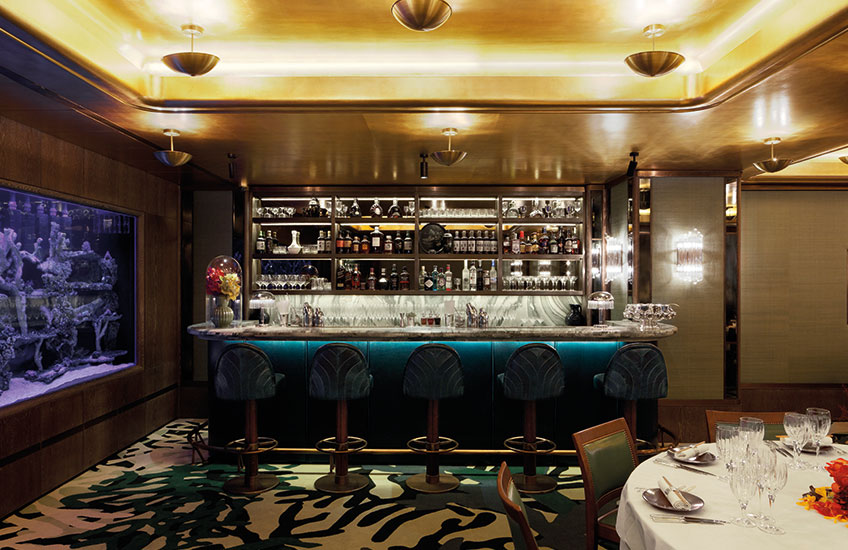 If you prefer a more inconspicuous table, a private sanctuary can be found on the lower floor. Its teal, gold and aqua environs are accessed by a staircase where that striking esmeralda onyx can, again, be found. Inspired by the work of celebrated Italian architect Carlo Scarpa (1906 – 1978), the understated glass, brass and onyx design operates as an informed design link between the main dining hall and the private dining area.

Named the Coral Reef Room the multidimensional space is more intimate but just as impressive in its decor which swaps artwork for coral reef tanks (we’ve heard they’re the world’s largest) and a mural ceiling for a luminous golden one, a nod to the glamorous Art Deco era. The coral design of the upstairs ceiling is transferred to the carpet for a softer touch. Textured silk wall panels in a delicate sea foam green are highlighted by glamorous wall sconces and aqua leather bar stools with accent stitching line up at the fabric-fronted bar. An aqua and off-white veined marble bar top and coordinating backsplash bring the notable mid-century aesthetic to another level. On the whole, the look is at once impressive and relaxing with an effect that only the ocean can offer. 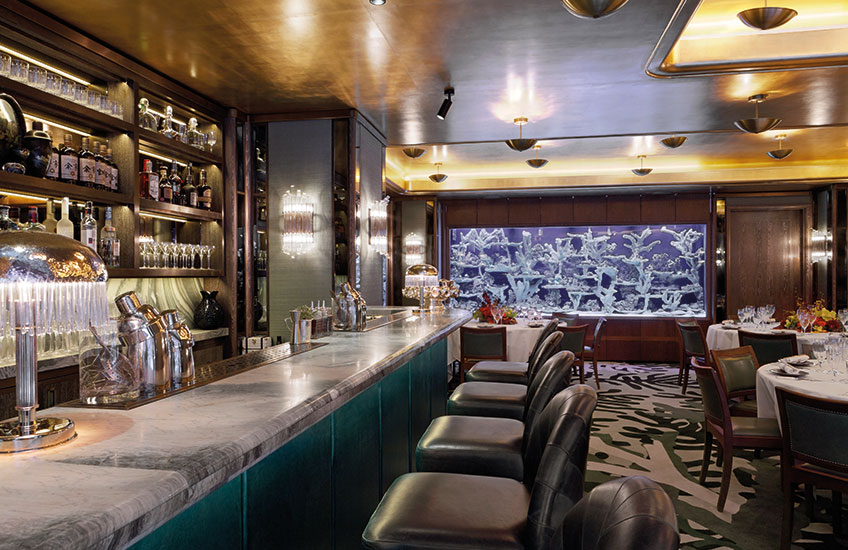 Hype is often unfounded but Sexy Fish stands deserving. It’s true what everyone is saying – it has been the one we’ve all been waiting for, its drama and whimsy are certainly big-night-out-approved (the LuxDeco team didn’t leave for hours) and it is the perfect place. Until the next Caprice opening, of course.