Have you ever visited a place and felt instantly transported in time? Thanks to a sensitive architectural restoration by Gerner Kronick + Valcarcel Architects and interior design by Martin Brudnizki (creator of boundary-pushing commercial ventures like Sexy Fish), the Beekman Hotel does just that.

And not only that. For, in a town where some impressive buildings have been razed (RIP Penn Station), the hotel also serves as a reminder of the importance of maintaining old world charm—an inclination which is becoming rarer.

In fact, in a move that would perplex any lover of historic architecture, the gem lay dormant for over a decade. It was then used as an office block for many more making it one of the most under-appreciated of iconic New York buildings. But, now, the building stands reinvigorated, so much so that luxury fashion house Valentino presented its Pre-Fall 2017 show there. Situated at the Manhattan end of the Brooklyn Bridge—just a stone’s throw from City Hall and New York’s Civic Centre—the hotel opened in September 2016 to find itself in the island’s most historically significant neighbourhood. But the Temple Court building (which the hotel now calls home) wasn’t the first significant edifice on the site.

On its corner of Beekman and Nassau once stood the Chapel Street Theatre, where Hamlet debuted to its New York City audience in 1761. The next incarnation was Clinton Hall—the home of the Mercantile Library Association which was the onetime publishing house for Edgar Allan Poe’s The Broadway Journal, and the site of inaugural New York University classes in 1832. Finally, today's granite, red Philadelphia brick and Dorchester stone Victorian-era edifice of 1881, developed by Eugene Kelly and designed by James M. Farnworth. Its facade was made an official New York City landmark in 1998, but its interior was protected in an entirely different way. In fact, the office workers who clocked their 9 to 5 there for many years would never have guessed that behind its plasterboard walls lay its grandest feature—a magnificent nine-story atrium, outlined by cast iron railings and finished with a remarkable pyramidal skylight. Today, this atrium is the gravitational centre around which the hotel’s 287 rooms (including 28 suites), dining venues and all of its activities revolve. Only the hotel’s two duplex penthouses—housed in the building’s turrets and with private terrace views of One World Trade, the Woolworth Building and City Hall Park—can compare in splendour. “The crown jewel of the property lies within the soaring atrium, setting the perfect backdrop for lower Manhattan’s downtown revival,” says Robert Andrews, Area Managing Director at the hotel.

At the foot of this atrium are the hotel’s drinking and dining facilities—an intimate network of expert-led establishments, each equally as atmospheric and promising as the next. The Bar Room at Fowler & Wells, a handsome après-work spot overflowing with historical references, fills the space directly below the light well. The bar itself is a stunning remake of a time-past speakeasy. A large-scale Persian carpet anchors an array of dining arrangements resulting in a visually exciting and renewed take on eclecticism. Tables and seating are mismatched, albeit carefully, in a way they might be after many years in business, nodding to the hotel’s imagined history which is very much based on real life events.

Its air is quietly mysterious, as if each table were the setting for surreptitious conversations over signature cocktails. (The same aesthetic is mirrored in the hotel’s new reception area with rugs covering the curving desk, topped by fringed lamps, literature-themed artwork and similar seating.) Although Augustine (headed by successful restauranteur Keith McNally) doesn’t enjoy quite the same views of the atrium, its interior design far and away compensates. The creation of decorative hand-painted tile work walls, a dramatic aged gold ceiling and wrought iron chandeliers gives the brasserie-style restaurant an atmosphere of its own.

Opting for a collection of bistro chairs and unadorned brown leather banquettes, Brudnizki keeps the furniture simple, allowing the Aesthetic backdrop, made up of florals and bird paintings and reflected all around by mirror panels, and classic French fare by chef Tom Colicchio make its mark. 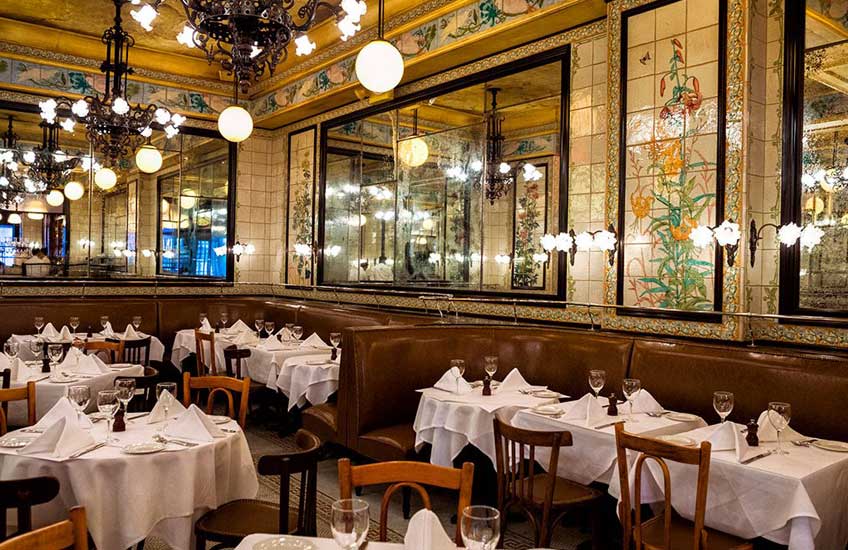 As you ascend the hotel’s many floors, the aesthetic becomes lighter. Fresh white walls modernise the bespoke and vintage furnishings collected from dealers around the world for a liveable and hotel-worthy experience.

The interiors are cohesive, with studio suites being as thought-out and well-crafted as the superior king suite. Custom-designed oak and leather headboards, in an olive green reminiscent of the hotel’s public areas, are matched with luxurious sateen Sferra linens, ceramic Chinoiserie dragon table lamps and modern marble-topped metal side tables in a signature Martin Brudnizki move. The rooms’ artwork—part of the hotel’s wider curated art programme—make a modern impact on the white gallery walls whilst quirky additions such as a skirted circular bar cart and decorative floor lamp feel like they’re from another time. The point is that nothing feels too new, nor too old in a strange but genius phenomenon by Brudnizki—the combination, a metaphor for the historical hotel’s new life.

Leaving the bedrooms and descending the atrium, floor by floor—taking in all of the craftsmanship and architecture which has once again been brought to life—the hotel's rich history is palpable. Its website states “Once upon a time. Now.” There couldn’t be a more fitting sentiment.