Noted in the Conde Nast’s House & Garden Dictionary of Design & Decoration (1973) as being “integral to the decoration of a room” there’s a lot to be said for this multifunctional, room-transcending piece.

A mainstay of the Palace of Versailles and the royal courts of Louis XIV (who is credited for popularising the piece), the console table of today comes from good design stock. So named for the S-curve bracket – a console in furniture speak – which supported the tabletop traditionally, the elegantly proportioned table was known for its narrow silhouette, which featured accents like shapely cabriole legs, shelf-like stretchers or elaborately gilded Rococo motifs. Often placed beneath a grand mirror and topped with a vase or sculpture, the design – interchangeably referred to as a pier table – has lasted the test of time, due in part to its chameleon-like way of reinventing itself.

Fast forward a couple of hundred years from its grand beginnings and you find interior designers doing wonders with console furniture in all sorts of spaces. This one-time decorative piece has proven itself as a multi-faceted must-have for the most design-led of spaces. From mini desk in a small-scale office to make-shift buffet in a dining room, these days the humble console table fulfils its original purpose and then some.

Originally designed as a decorative piece which would add a grandeur to a space, the console table has been transformed into an art piece in its own right. Do your room justice by choosing a style which will hold its own amongst the impressive chandeliers and iconic chairs of the interior world.

The traditional console table was fabulously extravagant with gilding everywhere and topped with nothing less than the finest of marbles. This style of console should be used as it was intended – with an ornate mirror in tow.

Something that the console table was never intended for was as a stylish storage option but that hasn’t stopped it from becoming one. Shelved consoles are great pieces to back onto sofas, making use of otherwise wasted space.

When it comes to a really special vignette of cherished family photos or a stunning piece of artwork, don’t draw attention away with a bold design. Barely-there silhouettes are a console’s forte with sleek designs being created from glass or slim-lined metal frames.

A modern console table – by nature of its style – can take on almost any form. Bases might be cantilever, sculptural or completely rethought (as in the case of this multilayered La Fibule design). Metal is the most logical material of choice for these designs although block-like wooden or resin designs, as well as all glass or lucite designs, are also popular. 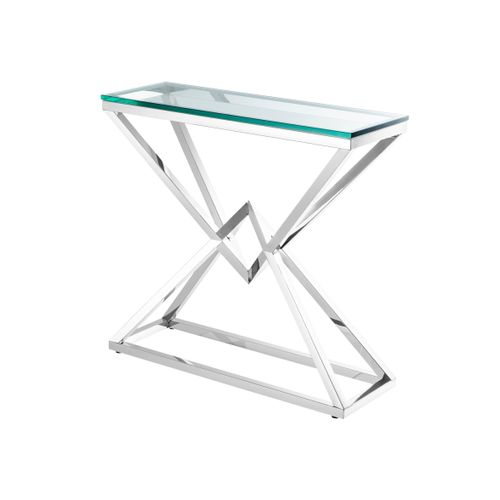 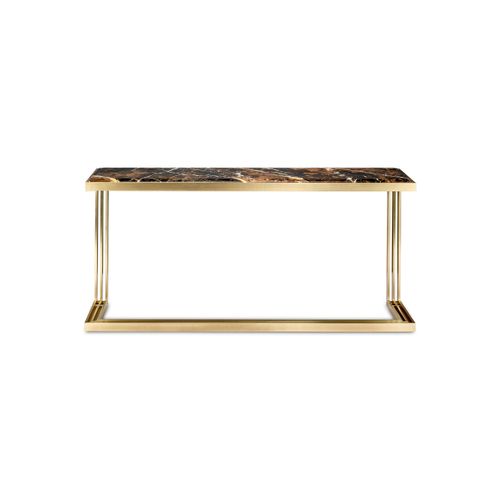 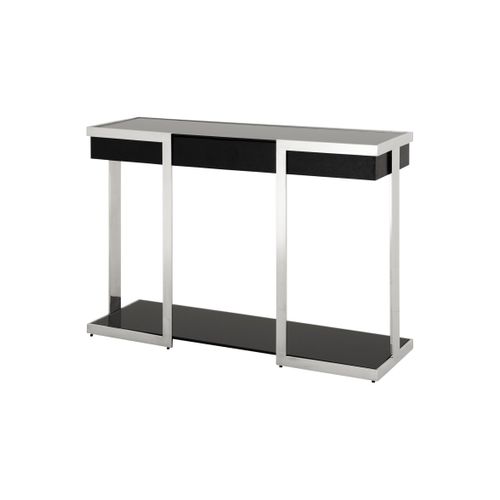 As its name would suggest, the demilune console table is a crescent-shaped design which has strong roots in the Neoclassical era. Traditionally it would have featured fluted legs, giltwood detailing and swag, urn and scrollwork motifs. Modern examples can be as simple as a a pared back tabletop and three slim-lined legs. Because of its unimposing dimensions, the design is well-suited to smaller spaces such as vestibules and stairwells. 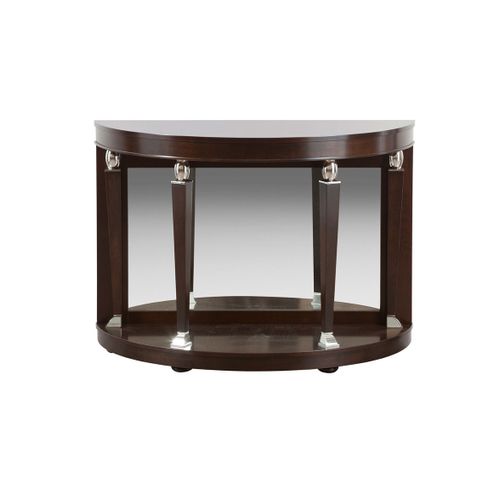 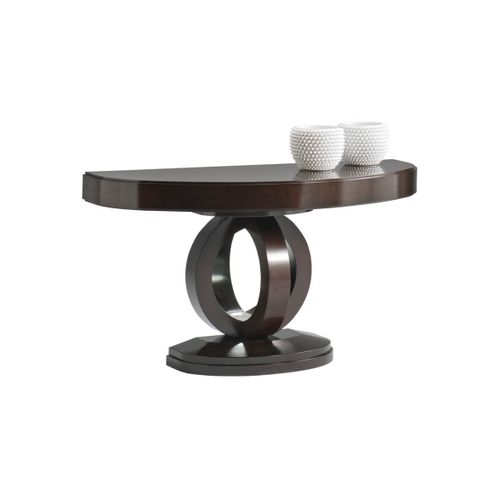 A classic console table is one with a simple tabletop and four legs composition, either with or without a shelf. Traditionally, the bases would have been very ornate while most contemporary designs are pared back. Cabriole legs would indicate a traditional design while tapered legs (with simple metal sabots) would suggest a more modern piece. Front drawers may be incorporated into the design for keys, matches and other hallway essentials. The single shelf attached to the design’s legs is a direct descendant of the stretcher – a structural element which existed before furniture manufacturing was sufficiently developed. 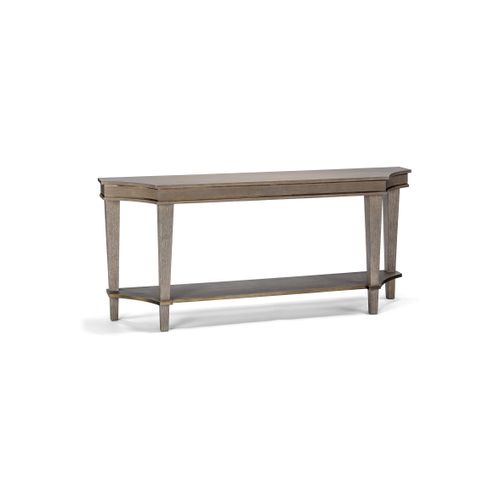 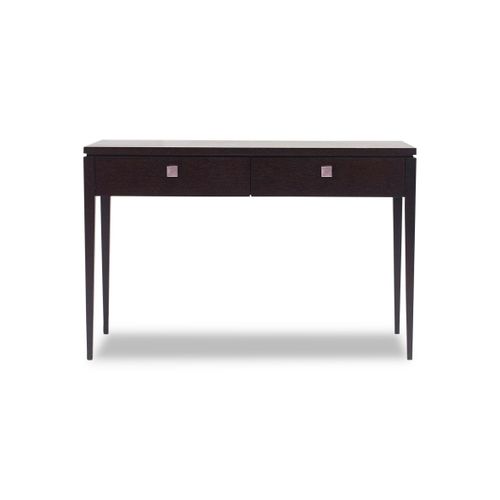 Graceful lines, handsome aesthetic and Art Deco vibes – a U-shaped console table is one of the most enduring console interpretations. Iconic furniture designer Èmile-Jacques Ruhlmann was the grand maestro of the style, typically using striped macassar ebony. Characterised by its giveaway base shape, the design suits formal spaces which have an inclination toward the refined. 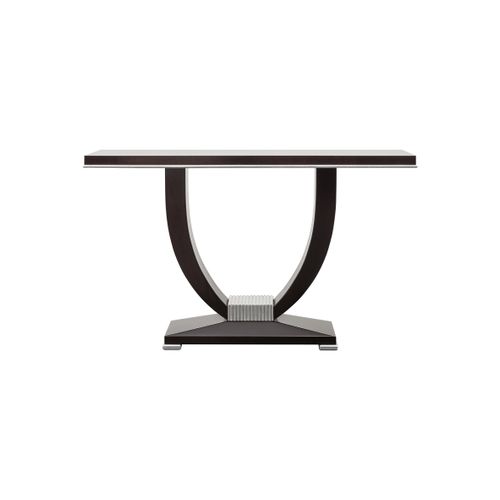 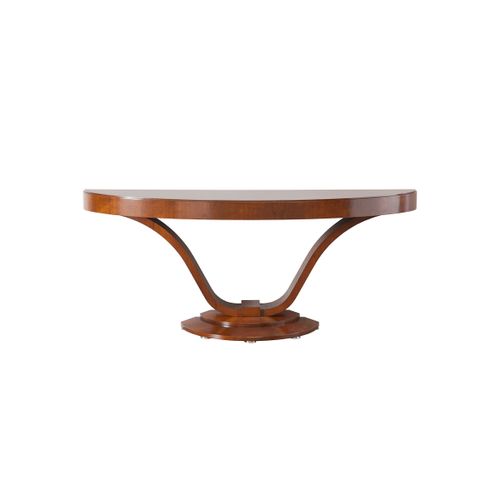 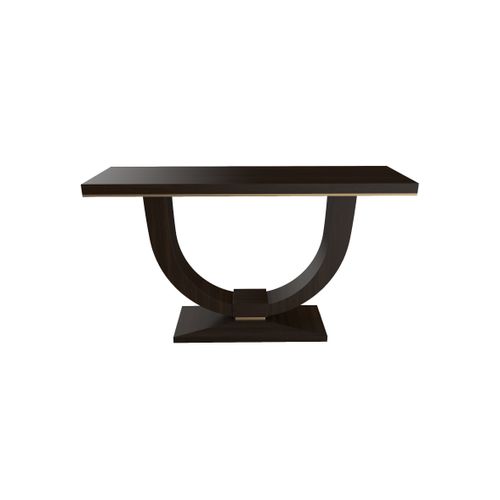 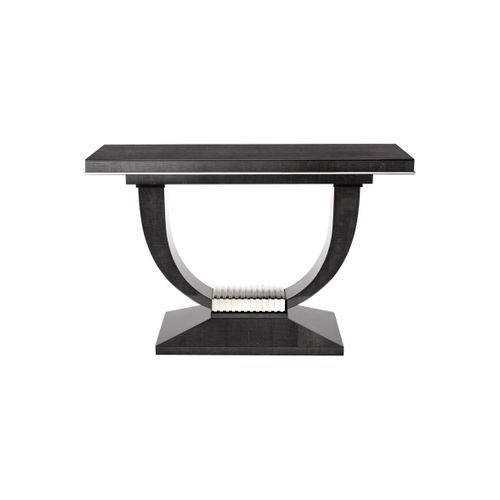 A thoroughly modern incarnation of the design, a sled-based console table is recognisable by its parallel legs which form a square when combined with the tabletop. Metal legs – another contemporary element – are the norm but clean-lined wooden designs are also found. High-gloss finishes and impeccable materials suit the gravitas aesthetic of this design. 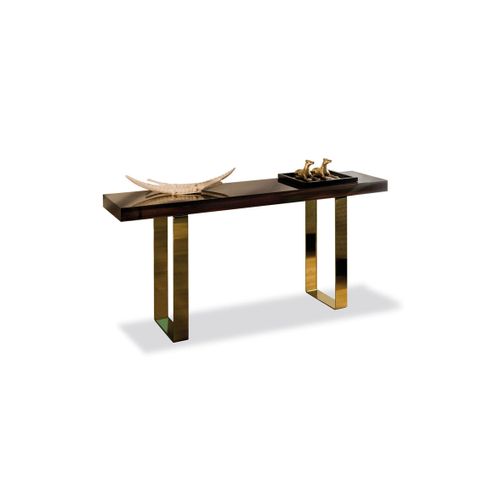 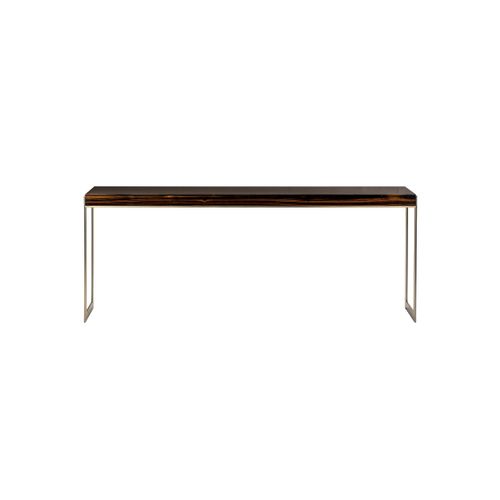 A pedestal console table is the closest relation of the original bracket-mounted console. This design would have started life as a wall-hung piece but, over the years, it has been developed a central foot on which the design rests. Decorative designs work particularly well with this silhouette and, again, it suits smaller spaces, although be careful to use a sufficiently supportive wall for heavier designs. 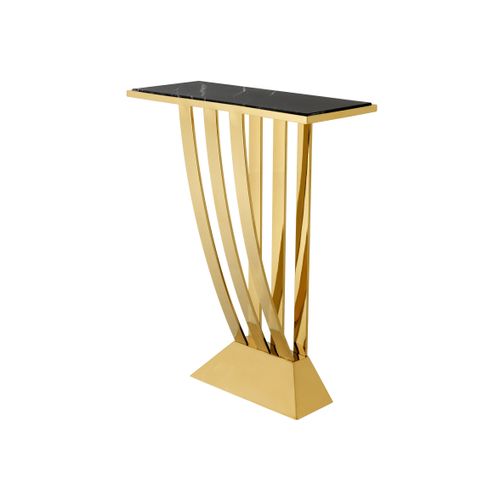 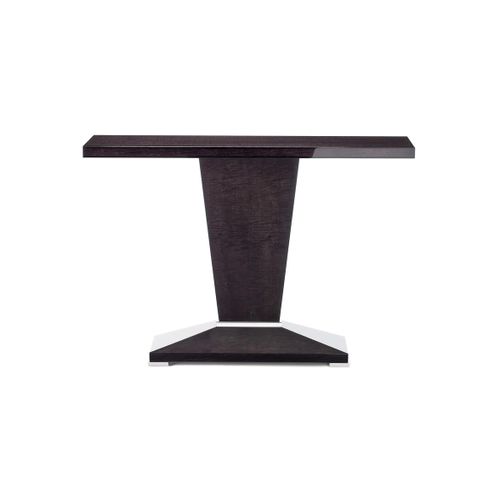