A chair is the defining character in the history of furniture. It is the piece which has enjoyed the most fame over the years and its various interpretations are arguably the design world’s most iconic pieces.

As individuals, iconic chairs have almost taken on the role of historical figures throughout the years. The Philippe Starck Ghost chair, for example – directly influenced by a Louis XV design – gained icon status in the twenty-first century but it wasn’t the first. It was preceded by many which shaped history and contributed to the development of design.

We’ve loved looking back and exploring those designs which have influenced the design world today. This round up of ten chair spans not only decades but centuries – each making a mark which has lasted throughout the years. 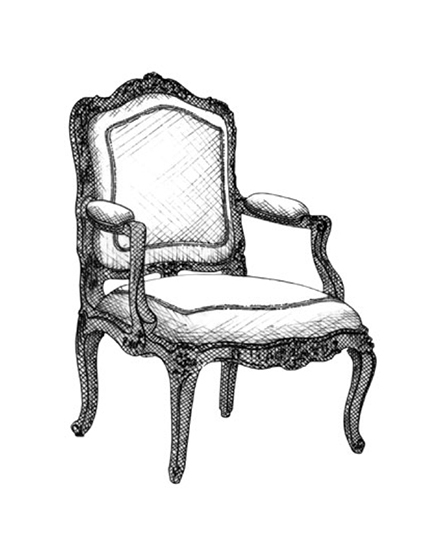 A House & Garden Dictionary of Design and Decoration claim states that, “There can be little doubt that mid-eighteenth-century French chairs have never been surpassed for elegance and comfort” with the Louis XV, in particular, being highlighted. Despite very few surviving, it has made a notable impact on ensuing designs being quoted by many designers as an important influence in their modern creations and having inspired many reproductions.

A Louis XV fauteuil is known for its intricately carved show wood frame (usually walnut or oak), open arms, gilding, padded back and curved lines. Silks, satins, damasks and velvets were used in original production. By the Louis XV era, cabriole legs were shorter giving it a much lower profile than its predecessors and stretchers were eliminated. Original designs were often signed much in the way cabinetry would be – proof of their significance – with notable chair makers including Tilliard and Lebas. 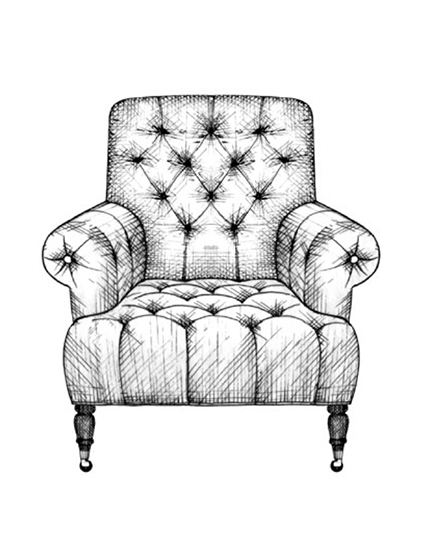 An instantly recognisable member of the sofa family, the original Chesterfield (reportedly commissioned by Phillip Stanhope – the 4th Earl of Chesterfield – in the early 1700s) was realised in a club chair version during the Victorian period and has remained a definitive traditional armchair since.

Like the sofa, the Chesterfield club chair (reportedly so-named because of its use in gentlemen’s clubs) is characterised by its deeply button-tufted leather, rolled arms and squared backrest. The addition of turned wood legs on casters creates a lighter design and one which can be moved with ease.

Modern incarnations are often upholstered in linen or other cotton-rich fabrics. 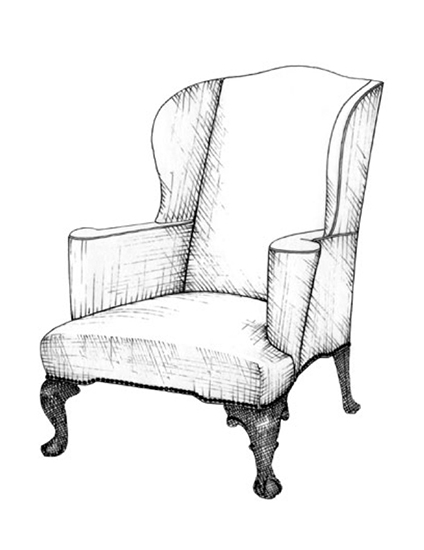 Defined by House & Garden as an “easy chair which became popular during the later seventeenth century”, a wing chair (also referred to as a grandfather chair) is named for its side wings which were originally introduced to prevent draft and also provided support for dosing heads.

Angular lines, pronounced wings and split carcases (meaning the seat and back upholstered in different fabrics) are just some of the elements which define modern versions of the chair. 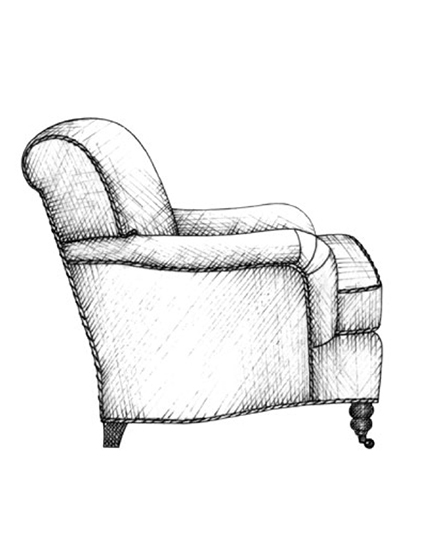 Also known as a Bridgewater armchair, this design is named for its set-back English roll arm which is low-set, gently curved and pleated towards the front. In this example, the backrest features a subtle scroll although a loose backrest and loose T-shaped seat cushion is also a prevalent style. Turned legs on castors is a notable feature of many traditional seating designs and the English roll arm chair is no exception.

As one of the most popular traditional chair styles, the design is renowned for its easy comfort – its thickly padded upholstery, relaxed silhouette and deep seat offer the sitter an inviting place to take a load off.

Previously patterned in country floral fabrics, the modern English roll arm chair has been remade for elegant contemporary settings and is now typically found upholstered in linen, herringbone or even leather. 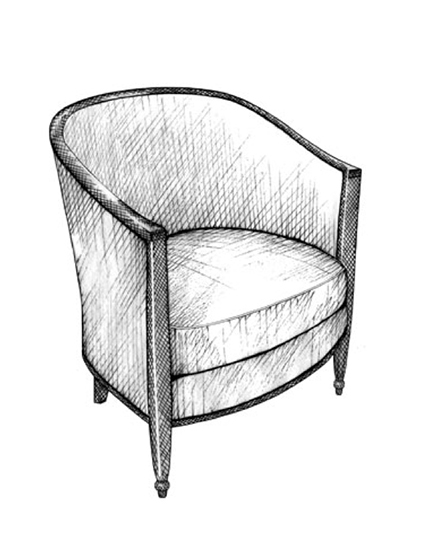 Primarily recognisable for its curved lines, this Art Deco armchair is an iconic piece of the 20th century and – like most Deco designs – is as fresh and sophisticated now as it was one hundred years ago.

The design’s unbroken curved backrest and seat pad is accented with sloping arms which remains continuous with the back – an element which gives the design a brilliantly fluid feel. The peek of show wood frame in this example offers a linear outline to the nearly fully upholstered chair in keeping with Art Deco’s penchant for structure and normally unseen framework. Carving wasn’t popular at this time so designs are often plain, instead highlighting the beauty of exotic wood veneers and, nowadays, often fully upholstered.

Upholstered in a plush velvet and accented with metallic finishes, this design works well in elegant formal living rooms. 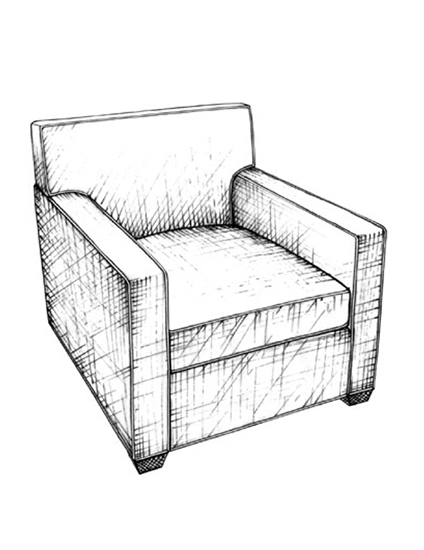 A vanguard in modern interior and furniture design, Jean-Michel Frank (1895-1941) is considered an original minimalist (although many design authorities do discount this claim as too simplistic). Nonetheless, it is true that his clean lines and understated style represented a sea-change in furniture design.

This armchair (in the style of Frank) is impressive for its apparently contradictory appeal – it channels an angular, tailored aesthetic but incorporates the look into a roomy and padded armchair design. Its smart look has proven it a popular piece in luxury commercial realms, such as waiting areas and offices, but the addition of a cushion also renders it an appropriate choice for stylish living areas.

Its fitted arms and back maintain a cohesion in the design and a tapered block foot – an original design feature – has gone largely unchanged, indicative of the design’s purity. 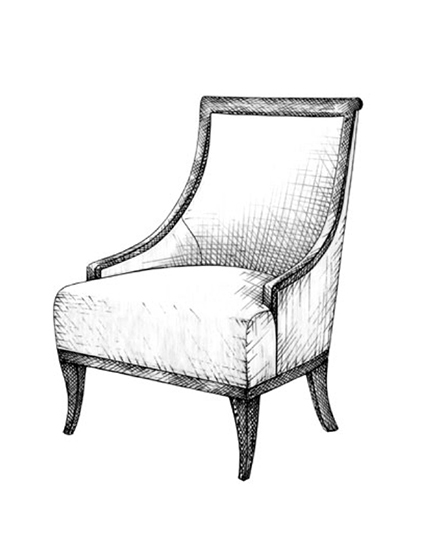 A transitional era between the Louis XVI and Empire periods, the Directoire style was prevalent during the last five years of the 18th century. Greatly influenced by the ancient Greeks and Pompeians, furniture took a much simpler form than the elaborate Louis aesthetics, featuring classical elements and Neo-classical architectural details. Carving was minimal and motifs included urns, sphinxes, palmettes and lyres.

The design nods to the klismos chair with its swooping arms extending from its backrest in one continuous line. Modern elements include a low profile which allows for a deeper seat, thus adding comfort or a taller occasional chair version.

The wonderfully versatile silhouette works wells in many rooms including bedrooms and hallways. 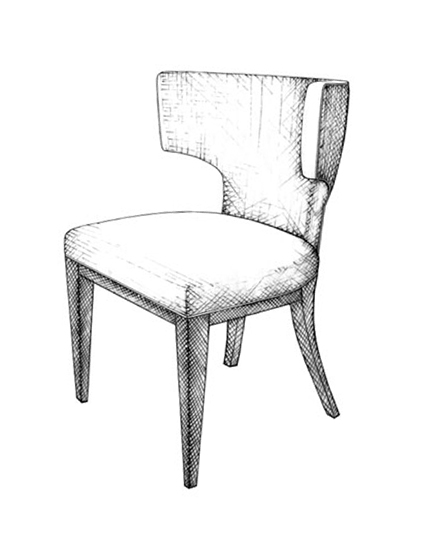 Undoubtedly the oldest chair design in this set, the klismos is a remnant from the ancient Greek empire and one which has been reproduces – based on archaeological artefacts – and reimagined in many ages.

Its main characteristic is the use of saber legs (concave, tapered and splayed legs) and a curved back which extends to produce wings. Original designs would have been made entirely of wood making them very light.

Modern examples are almost always unholstered which adds comfort and sometimes only the back legs may be saber as in this example. Piped detailing, cording or nailhead trim may be used to finish off the design. 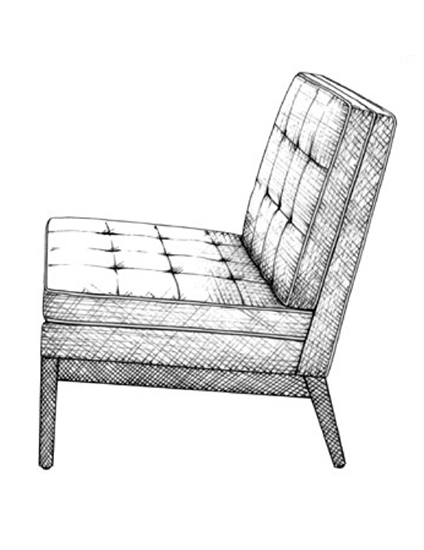 Designed in 1955 by Florence Knoll for her widely successful eponymous company, this lounge chair is notably inspired by Florence’s architectural training.

The current Knoll website states, “her designs were architectural in foundation, not sculptural. She scaled down the rhythm and details of modern architecture while humanising them through colour and texture. Her lounge collection, designed in 1954, is a perfect example of her restrained, geometric approach to furniture, clearly derived from her favourite mentor, Mies van der Rohe.”

The lounge chair’s built-in back and seat cushions are punctuated with shallow square button tufting whilst the simple metal base and legs are left exposed. The look is understated, eternally modern and informed.

The increasing use of stainless steel in furniture production led the way for modern designers to experiment with the hardy material and achieve things which were never before possible. Although Marcel Breuer’s impressive 1925 Wassily armchair was the first to use a bent tubular steel frame, Dutch designer Mart Stam was the one who patented the cantilever chair the following year.

Defined as a chair “with the seat supported on a U-shaped structure of metal tubing or bentwood”, the design forgoes the traditional four-legged chair construction making it a incredible feat of engineering.