Right now, somewhere in the heart of London’s prestigious Mayfair district, something fascinating is happening. As the first hotel to be added to the Corbin & King restaurant portfolio – which includes famed venues The Delaunay and The Wolseley – the doors of The Beaumont are officially open. And not just open, but mysteriously transformative. As the revolving doors of the luxury hotel welcome and bid adieu to guests, a notable change takes place with patrons finding themselves seemingly time-travelling between centuries.

This change comes courtesy of the building’s glorious metamorphosis from an Avis car rental (which it was until 2010) to the luxury hotel status (complete with Art Deco interior design) it never knew but now enjoys. Of the extensive rehabilitation, Principal at Richmond International Fiona Thompson explains, “The aim was to give it a sense of historical identity and for it to appear as though it had been restored to its former glory.” And what a glory it is. 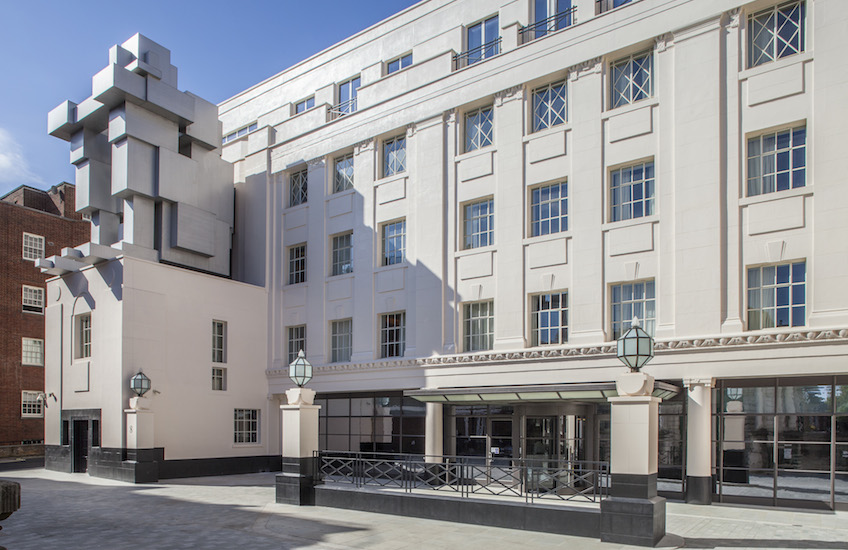 The site itself is an original 1926 design by architects Wimperis & Simpson (of the iconic Fortnum & Mason building fame) and was one of London’s most under-utilised Art Deco buildings. Until now. “We envisaged what it might have been like if it was originally designed as a hotel rather than a car garage,” says Fiona, who has some serious experience of making over iconic buildings like the Chicago Langham. Of course, this thought process was a shrewd move but also a challenging task considering the lack of background reference. In fact, with little to work with but with a partiality for an endearing back story, the hotel’s owners – Chris Corbin and Jeremy King – had to create one. They tell the tale of a certain Jimmy Beaumont who, disillusioned by the New York life, emigrates and opens a sophisticated hotel in the heart of London. But that’s a story for another time.

In reality, it seems that inspiration for the interior design was much less imaginary. Notable Art Deco buildings in the USA, Europe and the UK (like Eltham Palace, the Royal Institute of British Architects building and Bexhill Pavilion) inspired the design. Defining events from the time – transatlantic travel and the 1925 Paris Exhibition which really catapulted the Art Deco style to extraordinary heights – also made their way to the inspiration board. As fine reference points, these influences seem to have helped foster a penchant for cultured refinement and guided Richmond to furnish the project with authentically styled Art Deco furniture. Fiona explains, “As the hotel is in the heart of Mayfair, we felt it was important to create an environment with a level of indulgence and richness of culture.”

But no where is this indulgence tastelessly decadent in the way that some unrefined Art Deco tributes can be. Instead the tone is one of quiet sophistication – confidently subscribing to the immortal style without being brash about it. For those who have daydreamed of experiencing the glamour of the defining era, The Beaumont is well and truly a welcomed addition to the hotel bucket list. 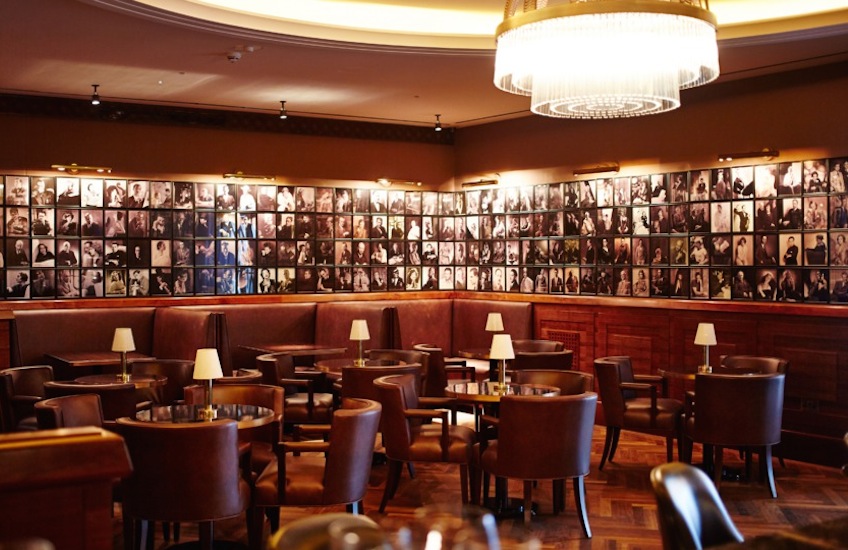 As mentioned, the hotel’s charm is felt as soon as one steps inside. Finding yourself in the lobby – itself an admirably restrained masterclass in Art Deco style with monochrome travertine and granite chequerboard flooring, beautiful cherrywood panelled walls and atmospheric coffered lighting – you’re instantly drawn into the buzz of the place. And for those familiar with the past work of its owners (Corbin & King are responsible for the award-winning restaurants Le Caprice and The Ivy), the fact that these bustling social areas are given prime real estate won’t come as a surprise. But what’s even more perfect about this design choice is that it’s also brilliantly in keeping with hotels of the age and their always being designed around these hotspots. The draw of the appropriately named American Bar and the Colony Grill Room restaurant is magnetic and the very natural pathway directly from the front door is irresistible. As is to be expected, the bar is decked out in row upon row of monochromatic photos of old Hollywood stars, parquet flooring and the same evocative but classic chandelier as the lobby, reemphasising a natural progression through the hotel. The restaurant boasts rich red leather banquettes and mirrored pillars and is enhanced with walls lined with Streamline Moderne sporting murals by American artist John Mattos. A modern day take on the New York grill room scene. Although it can host 100 diners, it doesn’t feel too grand or pretentious – intimacy and a level of anonymity seem to be important elements in the design.

Talking of anonymity, whilst the main bar and restaurant are open to the public, the hotel’s Cub room – an intimate room off to the left of the main lobby – is for residents only. The room is decked walls and ceiling in the same rich cherrywood and accented with faceted hung pendant lights, a semi-circular bar (a genuine touch) and velvet club chairs. Everything is designed to create a cosy nook away from the hustle and bustle of the hotel. Plus, it can only be a good thing when Bloomberg’s chief food critic Richard Vines is spotted hanging out there. 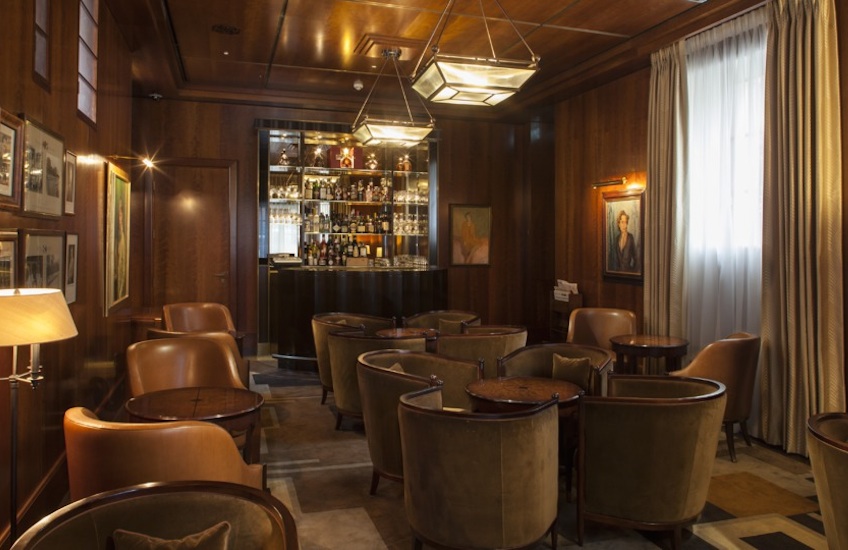 “We [put] a lot of research into the materials, patterns and textures. We used a rich palette of colours and materials, geometric shapes and elegant, timeless pieces to capture the luxurious glamour and exuberance of this visual and influential period,” says Fiona of the hotel’s thoroughly researched aesthetic. Rich. Elegant. Timeless. Definitely words which the hotel deserves.

A trip to the hammam and spa offers an equally authentic experience although of a different mien. In the place of dark and sophisticated it’s refreshing and slightly retro with white marble simply punctuated with dark, chrome fittings and contemporary silhouettes – exhibiting the progressive attitude of the age. 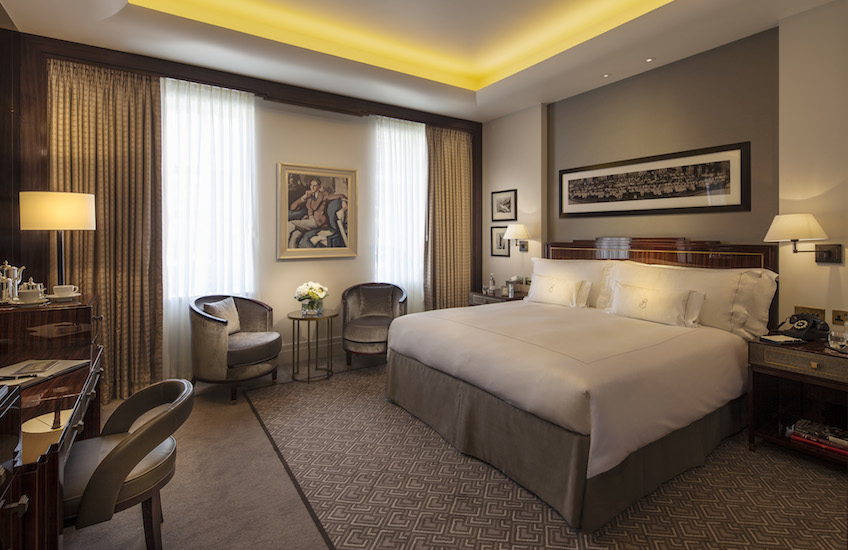 For 72 of the hotel’s 73 guest rooms – 23 of which are suites and 5 of which make up the Presidential suite – the mood is an understated colour palette of greys and taupes in the form of mohair velvet upholstery, subtly patterned carpeting and shagreen detailing. Super-glossy rosewood accents – including a step motif headboard (very Art Deco) – are the trademarks.

“We have incorporated all the modern comforts you’d expect to find in a five-star hotel of today into the design scheme,” relays Fiona who understands the importance of comfort as much as she does aesthetics, “We mustn’t forget that the hotel was converted using modern building techniques which ensure that the guests enjoy a perfect stay.” 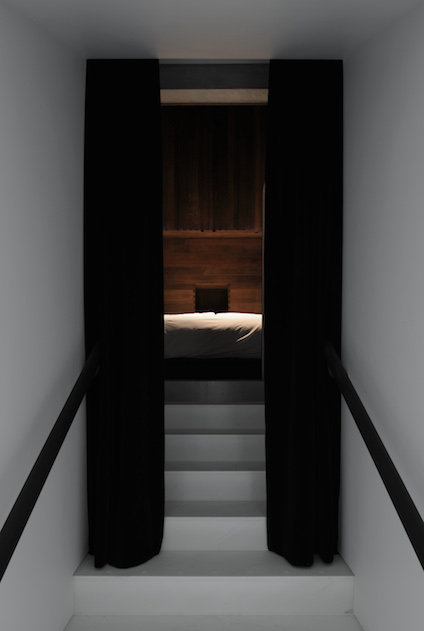 The remaining room which doesn’t quite adhere to the same styling is Anthony Gormley’s ROOM – a fabulous sculpture and an architectural addition to the hotel. Most widely known for his Angel of the North statue and a long-time friend of Jeremy’s, Anthony came up with the concept for the design in response to the local council’s desire for the hotel to house a piece of public artwork. A public artwork they wanted, a public artwork they got when this three-storeys high sculpture of welded stainless steel plates finalised. Whilst on first sight, the work might seem out of character – like everything in the hotel’s design – it’s cleverly appropriate, harking back to the Cubist craze of the era.

Anthony himself was the first to stay in the monolithic creation which is accessed through a curtain and up seven stairs from a pure white bathroom. The room is clad in dark fumed oak, with a single window in the roof and a bed. This darkened and purposefully simple design creates such an unbelievably intimate experience that it challenges our understanding of space and redefines the hotel experience.

Which is exactly what Corbin and King are achieving with their creation of The Beaumont. They’ve given life where life never existed, they’ve given heart to a building that never was and they’ve given a legacy which will continue for years. This jewel in Corbin & King’s crown might have been their first but it certainly shouldn’t be their last.